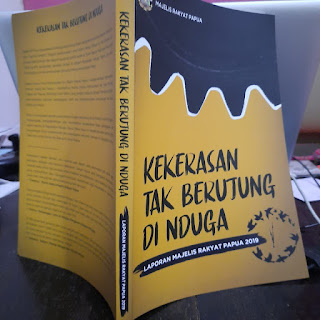 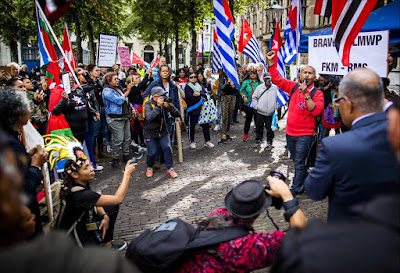 ———————————
https://www.indoleft.org/news/2020-01-21/jakarta-sixs-lawyer-tells-court-defendants-acted-according-to-the-law.html
2) Jakarta Six’s lawyer tells court defendants acted according to the law
Tempo – January 21, 2020
M Yusuf Manurung, Jakarta – The lawyer representing six Papua defendants, Oky Wiratama Siagian, has criticised a statement by the prosecutor who said that acts of separatism disguised as free speech must be cracked down on.
According to the prosecution, freedom of expression is limited and regulated under Article 28J of the 1945 Constitution.
Siagian responded by stating that the limits on expressing an opinion in public are regulated under Law Number 9/1998 on Freedom of Expression. According to Siagian, his clients obeyed the stipulations of this law.

“The six political prisoners submitted a written notification of the action with the Metro Jaya regional police, meaning they acted in accordance with the law”, said Siagian at the Central Jakarta District Court on Monday January 20.
“If the intent of these comrades was criminal, then why did they submit a prior notification of the action [with the police]”, he continued.
The agenda for today’s hearing was to hear a response from the prosecution to a note of objection or demurrer presented earlier by the lawyers representing the Papua defendants.

The public prosecutor refuted all of the arguments in the demurrer, including the argument on the need to include Article 87 of the Criminal Code (KUHP) in the charges because the indictment is already complete with locus and tempus (time and place of an incident).
Siagian then criticised the prosecutor’s reasons for this, saying that in order that the case be clear, the prosecution must include Article 87 which explains the concrete form that an act of makar (treason, subversion, rebellion) takes.
“It must be in conjunction with this article. Makar is an attack, correct, what was the form [of the alleged attack]”, asked Siagian.

The six defendants in the case are Paulus Suryanta Ginting, Charles Kossay, Ambrosius Mulait, Isay Wenda, Anes Tabuni and Arina Elopere. They were arrested by police for flying the Morning Star independence flag during a demonstration demanding a referendum for Papua in front of the State Palace on August 28, 2019.
The prosecution has charged Suryanta and his colleagues with two alternative articles. Namely, Article 106 of the Criminal Code (KUHP) in conjunction with Article 55 Paragraph 1(1) of the KUHP on makar and Article 110 Paragraph 1 of the KUHP on criminal conspiracy.
[Translated by James Balowski. The original title of the article was “Pengacara Kritik JPU: Aktivis Papua Sudah Beritahu Aksi ke Polisi”.]
Source: https://metro.tempo.co/read/1297612/pengacara-kritik-jpu-aktivis-papua-sudah-beritahu-aksi-ke-polisi/
--------------------------
https://www.rnz.co.nz/international/pacific-news/407995/signs-of-influx-of-west-papuans-to-png
3) Signs of influx of West Papuans to PNG
5:10 pm on 23 January 2020
Johnny Blades, RNZ Pacific Journalist johnny.blades@rnz.co.nz
There are signs of an influx of West Papuans into Papua New Guinea amid a protracted conflict across the border.
Since 2018, there's been a surge of violent exchanges between the West Papua Liberation Army and Indonesian security forces in Papua province.
Thousands of West Papuans have been displaced from the conflict's epicentre in the Highlands regency of Nduga in the Indonesian-ruled province.
Some of the displaced have fled across the border to PNG's West Sepik province, according to Vanimo landowner Dorothy Tekwie.
"The numbers in the camps on the PNG side have increased," Ms Tekwie said.
"On my own particular land the number of young people, young men I've never seen before... there is an influx of people coming in, and they feel they are able to slide back in again."
The main international border entry point at Wutung near Vanimo remains tightly guarded by Indonesian military forces. So too now are access points in Nduga and neighbouring Jayawija regency where many of the estimated 45,000 displaced Ndugans fled to last year when conflict intensified.
However, West Papuans are generally adept at moving and living in jungle, and across mountainous terrain. Long treks are made towards the international border, much of which is too porous for either Indonesia or PNG's security forces to comprehensively monitor.
Some Papuans who slip across the border further inland end up along the north coast in Vanimo, where Ms Tekwie's village is located, less than an hour's drive from Wutung.
"I don't know how they get through, but these are mountain people, they walk and live off the land; they know how to hunt; so if it's getting too much on the other side, they just move over here," she said.
"After all, this is just one island. There is no brick or cement border mark fencing from one end to another, it's just open forest."
West Papuans who end up in villages on the PNG side are generally able to blend in easily, being fellow Melanesians. However, those who are not registered as traditional border crossers, and therefore able to travel back and forth by law, are at risk of detection by Indonesian or PNG security forces.
"I try to control who is on the land because I don't want people to get into trouble and cause trouble for me and other clan members.
"So, I try to know who is moving in and out of my place, but there are so many young men there that I don't know who they are."
Ms Tekwie said that West Papuans from the Highlands region were determined to resist Indonesian rule.
---------
Posted by AWPA Sydney News at 12:43 PM No comments: 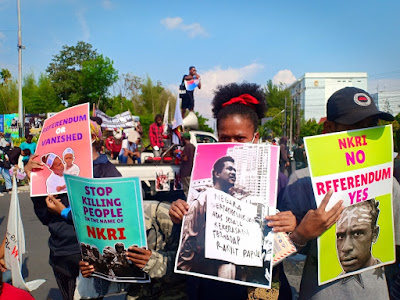