2) Protester charged with trespassing on Indonesian consulate-general in Melbourne
3) INSIGHT: Indonesia-Australia relations and the perils of success
4) Freeport may resume copper exports from Indonesia in ‘a day or two’ — authorities
————————————————————————————-
http://www.newmandala.org/kill-papuan-youth/ 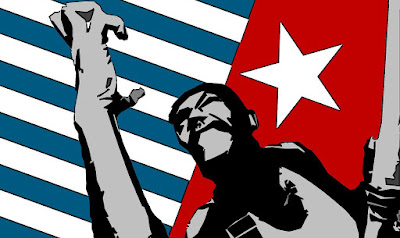 1) Mining Boss: Freeport Indonesia is Not Only Just Gold 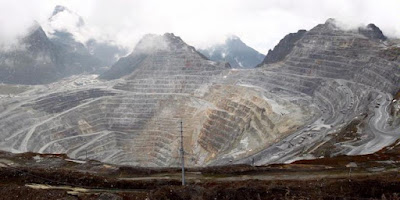 The Garsberg mine operated by Freeport in Indonesia. (Photo source: Kompas/Agus Susanto)
Jakarta, GIVnews.com – Giant copper and gold miner PT. Freeport Indonesia (PTFI) is complaining about the company’s image. The main perception of many in the public is that the mining field, which is operated by the firm in Papua, is full of gold.
There is also a perception that the gold that has been mined by the company is already in the form of clods, which can readily be taken offsite.
This complaint was aired by current PTFI president director Chappy Hakim. He was giving a public lecture at the post-graduate school of the Economy and Business Faculty at Universitas Indonesia in Depok, near Jakarta, last Friday (27/1) as reported by mediaindonesia.com. PTFI is a subsidiary of US mining giant Freeport McMoran.
The former Air Force chief said, “Freeport’s mine is located in extreme area. Out of every ton of the ores excavated, only several grams of copper and a small amount of gold can be obtained.”
Moreover, alongside other related agencies, the Indonesian customs and excise office strictly control the processing of clods into ores at PTFI’s facilities. Therefore, it is not true that the company can easily make big money. This is according to Chappy Hakim who took up the president director post last November.
PTFI started operation in Papua in 1967 and is currently Indonesia’s largest mining firm. Chappy Hakim said in the 1992-2015 period, Indonesia received US$16.1 billion from the Freeport’s Papua operation. This compared with the $10.8 billion that went to the company. This means that so far they have got 60 percent and 40 percent in revenue sharing, respectively, he added.
Also in Depok, Chappy Hakim said that they were still reviewing the newly issued government regulations that allow PTFI to continue exporting certain minerals in compensation for a contract extension and a commitment to build a smelter.
He said as quoted by the Jakarta Post, “Since the government regulation has just been issued, Freeport Indonesia is currently trying to reposition itself to see how it can continue to survive.”
———————————————
http://asiapacificreport.nz/2017/01/31/indonesia-blocks-websites-circulating-letwestpapuavote-petition/
2) Indonesia blocks websites circulating #LetWestPapuaVote petition
By PMC Editor -
Launch of the Free West Papua Campaigns 2017 global petition calling for an internationally-supervised vote for West Papua at Westminster last week. Video: Pouk Malay
By Badriyanto in Jakarta
Indonesian military (TNI) chief General Gatot Nurmantyo was relaxed in response to news that there is a West Papua people’s petition seeking to separate West Papua from the Unitary State of the Republic of Indonesia (NKRI).
“Everything’s okay with West Papua right. There isn’t any problem,” said Nurmantyo during a hearing with the House of Representative’s Commission I overseeing information and communications, defence and foreign affairs at the parliamentary complex in Jakarta.
Nurmantyo said he was not going to get upset over the various petitions initiated by “criminal” groups because it was a waste of time and energy on matters that were of little substance.
Nurmantyo also said that the Ministry of Communication and Information (Kominfo) had already blocked a number of websites that had been circulating the petition.
“If the petition’s not from an official group then why should we bother about it, it’s tiring right. Who made this [petitions], who makes them, there’s no end to them,” said Nurmantyo.
As already reported, an online petition has been circulating supporting West Papua’s separation from the NKRI.
The petition is targeting 20,000 people and will be taken to Geneva and handed over to the United Nations.
First published by Okezone in Bahasa on January 26. Translated by James Balowski for the Indoleft News Service. The original title of the report was “Tanggapi Masalah OPM, Panglima TNI: Papua Barat Baik-Baik Saja”.

————————————————-
http://www.thejakartapost.com/news/2017/01/30/former-regent-nabbed-as-suspected-drug-user-in-west-papua.html
3) Former regent nabbed as suspected drug user in West Papua
Jakarta | Mon, January 30, 2017 | 01:21 pm
Police in West Papua will continue the legal process against a former regent, who was arrested on Sunday for allegedly using drugs, even though several parties have tried to intervene with the case.
Manokwari Police chief Adj. Comr. Christian Rony Putra said on Monday the police had named Teluk Wondama former regent Alberth Torey as a suspect for consuming crystal methamphetamine.
“Some parties have tried to intervene, but I will thoroughly process the case,” Rony said as quoted by tempo.co. “Drug cases can’t be resolved through customary law,” he added.
Alberth was arrested at his house in Manokwari early Sunday with 0.02 grams of crystal methamphetamine. He is now being treated at Manokwari Regional Hospital.
Alberth also faced drug charges with his second wife Viviani Idriyani in April 2011.
Posted by AWPA Sydney News at 11:36 AM No comments:

9:51 am today
Strong distrust remains among the indigenous Papuans of Indonesia’s Merauke regency about a major "food estate" project
Jakarta has thrown high level support behind the Merauke Integrated Food and Energy Estate, or MIFEE, a project in the far south east of Papua province
Eventually expected to cover 1.6 million hectares, MIFEE has attracted dozens of investors, looking to grow food crops and palm oil.
Billed as a project to address food security concerns for parts of the country, local Papuan communities have complained that MIFEE is alienating them from their land.
A member of the video-based advocacy organisation Papuan Voices, Wensi Fatubun, said young Papuans in Merauke have begun using video to convey their opposition.
"We try to empower the community to do how they can protect their own land, their own rights, from the Merauke Integrated Food and Energy Estate project."
However, the government said MIFEE was aimed at helping create improved living standards for Papuan communities.
Indonesia's President Joko Widodo has personally visited the MIFEE site as part of his campaign to foster greater economic development in Papua.
Earlier this month, Government Affairs Assistant Secretary for Law and Human Rights in Papua, Wakerkwa Doren said a presidential special envoy was heading to Merauke to check on food security, and people's economic development.
He told Tabloid Jubi that as merauke is a regency bordering a neighbournig country, PNG, it was important to work with provincial government to address the people's concerns.
Meanwhile, recently released statistics released by Indonesia's Bureau of Statistics on the ethnic composition of Papua region's population identified Merauke regency as one of five regencies with a majority of non-Papuans.
Based on the population figures from Indonesia's 2010 census, non-Papuans make up around 63 percent of Merauke's population.
Australia-based specialist in West Papuan demographics, Dr Jim Elmslie expected that as Indonesia's economy grew, demographic change in Papua regions like Merauke would continue.
"So a lot of that long-term growth will come out of West Papua," he said, "and if that continues, it will involve shifting more and more people down to that region."
Other regencies where the indigenous Melanesians make up the minority of the population include two other regencies that, like Merauke, are close to the border with PNG.
The regencies where the non-Papuan population is concentrated tend to be areas where access to health and education services is best.
———————————————
Posted by AWPA Sydney News at 11:21 PM No comments: