1) CLEMENCY FOR UWAMANG, A TEST FOR JOKOWI 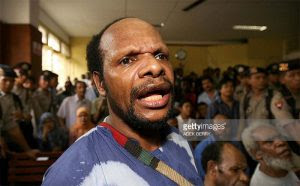 2) Raja Ampat promotes culture with festival, handicraft exhibition
————————————————
http://www.thejakartapost.com/travel/2017/07/30/papua-to-hold-the-fourth-keerom-cultural-festival.html
1) Papua to hold the fourth Keerom Cultural Festival
News Desk The Jakarta Post
Jakarta | Sun, July 30, 2017 | 02:22 pm
Papua is set to hold Keerom Cultural Festival (FBK) from August 2 to 4 at the Swakarsa soccer field, Asyaman village.
Themed “Bangsa Yang Bermartabat Adalah Bangsa Berbudaya Pesona Indonesia Pesona Keerom” (A Dignified Nation is a Cultural Nation of Indonesian Charm, Keerom Charm), the festival will showcase the original culture of Papua among other attractions.
“Those who want to see the beauty of Papua and its unique culture, please come to Keerom, Papua. This event also targets the neighboring country Papua New Guinea,” said tourism ministry's archipelago marketing development deputy Esthy Reko Astuti.
Read also: Cenderawasih Bay, a haven for whale shark enthusiasts
Esthy added that this year is the fourth anniversary of the festival. The event will be the medium for artists, even the upcoming ones, to channel their creativity.
“Keerom regency has 19 ethnicities and tribes. It is very rich in culture thus needs to be presented on a huge-scale art event,” Esthy added.
Traditional dances that will be showcased at the event are non-sacred dances or creative dances that are still being preserved up to this day. All dance studios in the regency have been invited to participate. Celebrated Papuan singer, Edo Kondologit, will also be performing in the Kerom Cultural Festival.
The event will also showcase a dance performance from Papua New Guinea. The neighboring country will send eight cultural studios consisting of 348 participants. (asw)
—————————————————
http://www.thejakartapost.com/travel/2017/07/29/raja-ampat-promotes-culture-with-festival-handicraft-exhibition.html
2) Raja Ampat promotes culture with festival, handicraft exhibition
News Desk The Jakarta Post Jakarta | Sat, July 29, 2017 | 05:02 pm
Raja Ampat in West Papua is known as one of the most beautiful places in Indonesia. But the place also has interesting culture to offer, hence it hosts a string of attractive festivals.
The latest one is Suling Tambur Festival and Traditional Handicrafts Exhibition that run from July 28 to 30 at Waisai Torang Cinta Beach and was officially opened by West Papua governor Dominggus Mandacan.
Read also: Saving Raja Ampat waters with tourism
Throughout the festival, visitors are invited to join underwater activities, such as snorkeling and diving. It also features shows like suling tambur music parade, suling tambur traditional music competition and the best marching band majorette and best costume competitions.
The handicrafts exhibition is expected to boost local economy. “These handicraft products made by the locals can be purchased and brought home as a special gift from Raja Ampat,” said Raja Ampat Tourism Agency head Yusdi Lamatenggo.
Read also: What to do in Raja Ampat beyond diving, snorkeling
Yusdi said 24 districts in Raja Ampat were invited to take part in the festival.
The festival and exhibition marked the first time these kind of events are being held in Raja Ampat and the administration is planning to make them an annual event. (kes)
———————————————————
Posted by AWPA Sydney News at 1:06 PM No comments:

1) 2 miners killed in landslide in Tembagapura

2) One killed in clash over district head election in Papua 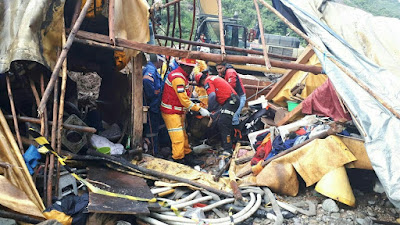 Fatal incident: Search and rescue personnel attempt to the remove bodies of two gold miners trapped in a landslide in Banti village, Tembagapura, Timika, Papua, on July 29. (Courtesy of the Tembagapura Police/File)

Two gold miners were killed on Saturday in a landslide triggered by heavy rainfall in Tembagapura, Timika, Papua.
The miners, Agus Sumarno, 35, and Sardiono, 30, died after a landslide buried their camp on the border of Utikini and Banti villages in Tembagapura at around 12:30 a.m., local time.
“They were buried under the soil. Five other people who were with them at the camp when the landslide occurred survived,” Tembagapura Police chief Adj. Comr. Hasmulyadi told The Jakarta Post on Saturday.
An emergency rescue team from Freeport Indonesia and personnel from the Tembagapura Police managed to remove the bodies of both victims from the location at 2 a.m.
The victims were taken to Tembagapura Hospital. “The bodies arrived at the hospital at 7 a.m. and are still in the mortuary room,” said Hasmulyadi. Both miners will be buried in their hometown of Pati, Central Java.
Hasmulyadi said Banti was prone to landslides, especially if heavy rainfall occurred in areas around Tembagapura.
Saturday’s landslide cut off an access road connecting Banti village and Tembagapura. In 2016, a landslide occurred at the same location, but there were no fatalities at that time.  (ebf)

2) One killed in clash over district head election in Papua

————————————————————
http://tabloidjubi.com/eng/patients-tuberculosis-tb-increased-jayawijaya/
3) PATIENTS WITH TUBERCULOSIS (TB) INCREASED IN JAYAWIJAYA
AdminJul 30, 2017
Wamena, Jubi – Patients with tuberculosis (TB) in Jayawijaya tend to increase from 2016 to second quarter of 2017.
The increase was revealed by Jayawijaya Health Office’s data. By 2016, there are 528 TB cases. Meanwhile, the number of TB people in 2017 up to June 2017, at about 250 cases.
“TB patients have increasing trend from year to year,” said dr. Siwi Murniati, as medical health person responsible for TB program of Jayawijaya Health Office to journalist, Thursday (July 27).
Dr. Siwi said they would implement dots strategies in 15 health care centres such as hospitals, Kalvari clinics, and 13 Puskesmas, to handle TB in the area.
“All officers have been trained with that strategy (dots strategy), although not completed,” she said. Most TB patients in Wamena Hospital are coming from various regions.
Related to TB control program in Jayawijaya, doctor Siwi admitted that it still need much effort to find suspect and patient of TB. He said, many challenges faced in providing services in Jayawijaya district.
Meanwhile, Assistant I of Jayawijaya regional secretary, Living Wusono, after opening a public consultation work on regional action of TB prevention of Jayawijaya Regency, said that his office will demand the active role of all stakeholders in TB prevention efforts.
“The work is to strengthen the regional action plan related to TB control in Jayawijaya Regency.Therefore, we will ask all stakeholders to take part in the regional action plan,” he said. (*)
——————————————————————-
http://tabloidjubi.com/eng/facts-obby-kogoyas-verdict-considered-racist/
4) VERDICT AGAINST OBBY KOGOYA IS CONSIDERED FLAW AND RACIST
AdminJul 30, 2017
Jayapura, Jubi – Obby Kogoya (22) was convicted of violating Article 212 of the Criminal Code with 4 months of confinement and 1 year probation. The Legal Aid Institute (LBH) of Yogyakarta considered that the verdict was not based on the facts at trials because all of prosecution evidence presented by the prosecutor was not proven.
“In fact, through the evidence presented by the legal advisor, it was mentioned that Obby Kogoya did not fight against the officers with violence,” said Yogi Zul Fadhli, one of the lawyers team from LBH Yogyakarta who accompanied Obby Kogoya Friday (July 28).
The panel of judges chaired by Wiwik Wisnuningdyah, and accompanied by Bambang Sunanto and Hapsoro Restu Widodo as members.
LBH considered this decision to be jurisprudence for the apparatus in law enforcement that does not in line with human rights in the future.
Obby was arrested on the siege incident of Papuan student dormitory. He also experienced torture including racism by a group of mass organizations against Papuan students who’d like to stage a peaceful rally to support West Papua full membership in MSG, on July 15, 2016.
From the facts of the events of July 15, 2016 according to LBH has already shows the existence of legal events which wa: silencing the space of democracy, torture, racism and criminalization against Obby Kogoya.
The process of criminalization of Obby takes a long time, approximately a year. Lack of evidence had delayed the trial process long enough.
Excessive use of security forces
LBH also deplored the attitude of the Yogyakarta police who continue to direct their troops using a single truck and several motor bikes which always present during the trial. This police attitude raises its own question marks related what goals and who is secured, and for what reason.
While Obby Kogoya, a nursing’s student who are working on his thesis, is far from having dangerous impression or act. Obby patiently attend his trial while fulfilling his college obligations at the Respati University of Yogyakarta.
In preliminary hearing of the Obby case against the Yogyakarta Regional Police, August 30, 2016 the armed forces even entered the court and had stood behind the judge.
Meanwhile, the perpetrators of Obby’s torture are still roaming freely.
“Therefore, we urge the Yogyakarta Police and the court to arrest and to process the police officer who conducted torture against Obby Kogoya on July 15, 2016 whose case has been reported to the police,” said Yogi.
Appeal
LBH Yogyakarta is very disappointed and deplores of the decision against Obby Kogoya who does not stand on the fact of the trial as a whole. LBH also condemned racial and ethnic discrimination in law enforcement against Obby and Papuan students in general in Yogyakarta.
Prior to the hearing, Emanuel Gobay, another member of Obby Kogoya’s lawyer team from LBH Yogyakarta had said that the result of the verdict will show the quality of law enforcement and democracy in Yogyakarta.
When confirmed by Jubi Friday (July 28) related to further legal action to be taken by LBH Yogyakarta, Emanuel firmly answered will state an appeal.
“We will make appeal. We were given 7 days, in that period we will discuss with Obby, since it depends on the will of Obby,” he said.
According to Emanue,l appeal submitted as part of the protection of human rights and democracy and against police officers who discriminate and torture in carrying out their duties.
“The appeal is also part of protection against the dignity of Obby who in reality has never conducted violence against the officers while the perpetrators of torture against Obby are not processed, which is strange in the context of a constitutional state that has a constitutional responsibility to protect human rights,” he said.
Obby Kogoya, told Jubi shortly after the verdict on Thursday (July 27), said very disappointed with verdict. “The verdict from the judge this morning did not match the testimony of the witnesses,” he said while still not forgetting to give thanks for all effort that has been done. “But for all what happens I should have said thanks,”he said.(*)
———————————-
Posted by AWPA Sydney News at 2:26 AM No comments: