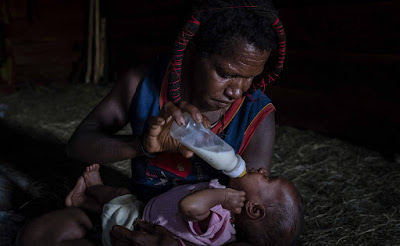 A mother at the location of the refugee community in Nduga was giving milk to her child - Jubi / Albertus Vembri
Papua No. 1 News Portal | Jubi
Jayapura, Jubi - Refugees Nduga refused assistance provided by the Ministry of Social Affairs (Ministry of Social Affairs). This refusal was carried out by refugees in Weneroma, Jayawijaya after learning that the coordination meeting in the distribution of aid was carried out in Makodim Jayawijaya.
This refusal, according to the head of the Papua Mountains Central Law and Human Rights Advocacy Network, Theo Hesegem, was carried out through an open meeting attended by the community, church leaders and traditional leaders on Monday (7/29/2019).
"The aid will be brought to Wamena after the media reported the condition of the Nduga refugees. If that is the ministry's assistance, it should be handed over by government representatives to direct refugees. But the reality is not the case, "said Hesegem, Tuesday (07/30/2019).
According to Hesegem, the refugees after learning of a coordination meeting in Makodim Jayawijaya, immediately held a meeting. When the Ministry of Social Affairs delegation came to the location of the refugees in Weneroma, the refugees had decided to reject the assistance. The reasons for the refugees were also clearly stated. Refugees cannot receive assistance if the distribution involves security forces besides being traumatized because of the beliefs of the refugees. 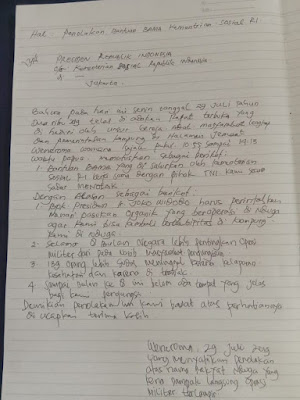 Congratulations to the people of Vanuatu on their 39 years of Independence.

Congratulations to the people of Vanuatu on their 39 years of Independence.

Posted by AWPA Sydney News at 1:29 PM No comments:

Pacific Islands Forum Foreign Ministers have agreed that alleged human rights violations in West Papua must remain on the agenda of the regional body.
Foreign ministers wrapped up their meeting in Suva at the weekend, laying out the agenda for next month's Forum leaders' summit in Tuvalu.
Discussing the Forum's position on Papua, the foreign ministers acknowledged the reported escalation in violence and continued allegations of human rights abuses in the Indonesian-administered region.
This comes amid ongoing armed conflict between the West Papua Liberation Army and Indonesia's military in Papua's central Highlands.
The ministers called on all parties to work to address the root causes of the conflict by peaceful means.
They agreed to re-emphasise and reinforce the Forum's position of raising its concerns over ongoing violence and abuses in Papua, a position taken in 2016 by Forum leaders.
While the ministers said they seek open and constructive dialogue with Indonesia on these issues, some Forum governments remain frustrated that earlier requests for Jakarta to allow a Forum fact-finding team in to Papua came to nothing.
Meanwhile, the Forum ministers said they welcomed an invitation by Indonesia for a team from the office of the UN High Commissioner for Human Rights to visit West Papua.
Near the start of the year, the office of the commissioner, Michelle Bachelet, confirmed that Indonesia had, in principle, agreed to grant her office access to Papua.
However, Ms Bachelet's predecessor in the role, Zeid Ra'ad Al Hussein, last year voiced concern that an earlier Indonesian government invitation for the office to visit Papua had not been honoured.
The Forum foreign ministers "strongly encouraged both sides to finalise the timing of the visit and make every endeavour to provide a report on the situation before the next Pacific Islands Forum Leaders meeting in 2020”
---------------------
Posted by AWPA Sydney News at 2:22 AM No comments:

Jayapura (ANTARA) - Patrol of the Battalion 126 / KC security task force has found a marijuana trees planted in a border area between the Indonesian province of Papua's Banda village, Waris Sub-district, Keerom District, and Papua New Guinea (PNG).Commander of the battalion Lieutenant Colonel Infantry Mulyo Junaidi told ANTARA in Jayapura on Sunday that a routine patrol carried out by its members on Saturday (July 27) found six marijuana trees and a package containing dried marijuana which was allegedly not taken by the owner.Initially members of the patro found a package containing dried marijuana while resting on the edge in the middle of the forest.Shortly after finding a package containing dried marijuana, a group led by Chief Sergeant Ruslan Simamora conducted sweeping around a hut and found a cannabis tree as high as around 20-60 cm."Patrol members were able to go back to sweeping, but did not find the marijuana tree so they returned to the post carrying six cannabis trees and one package of dried marijuana," Mulyo said, adding that the discovery of the cannabis tree estimated that there were plants on the mountain.The Indonesia-PNG border with hilly terrain and wilderness is used as a group of people to harvest marijuana trees which are then sold to Jayapura (capital of Papua Province) and surrounding areas.
------------------
Posted by AWPA Sydney News at 4:59 PM No comments:

2) Freeport’s gold and copper sales down 50% due to mine transition
3) Indonesian logger and palm oil producer, the Korindo Group, is challenging some of the claims by environmental NGO, Mighty Earth.
4) Papuan Separatists Unification Unlikely to Stabilize
--------------------------------
https://thediplomat.com/2019/07/west-papuas-quest-for-independence/
The Diplomat
1) West Papua’s Quest for Independence
50 years since the so-called Act of Free Choice, an independent West Papua is closer but still elusive.
By Olivia Tasevski July 25, 2019 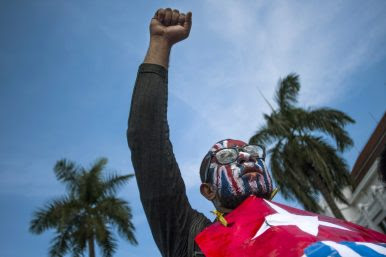 A Papuan rises his fist as he displays the "Morning Star" separatist flag during a protest commemorating the 50th year since Indonesia took over West Papua from Dutch colonial rule, in Yogyakarta, Indonesia, May 1, 2013.  Image Credit: AP Photo/Gembong Nusantara

West Papua and Papua — collectively referred to as ‘West Papua’ — represents the easternmost provinces of the Indonesian archipelago. Despite being ethnically, culturally, and linguistically connected to neighbouring Papua New Guinea and wider Melanesia, West Papua has been part of Indonesia since 1969.
Sovereignty over West Papua was handed over to Indonesia from the Dutch following a UN-backed referendum on independence dubbed the ‘Act of Free Choice’ in which approximately 1,000pre-selected government delegates voted on behalf of the entire population. Despite questions over the referendum’s legitimacy, Indonesia has vigorously defended its claims over West Papua because it was once part of the Dutch East Indies — the basis of Indonesia’s current borders.
Since coming under Indonesian sovereignty, West Papua has experienced decades of low-intensity but consistent conflict. This has involved an ongoing armed struggle by several separatist groups which has been met with military force and political suppression by the Indonesian Government. Human rights groups have long accused Indonesian security forces of abuses in West Papua, with independence activists highlighting the ‘slow-motion genocide’ of the indigenous population through transmigration programs from densely populated Java.
Recent pushes by Jakarta have attempted to simmer tensions through a ‘hearts and minds’ approach in what is one of Indonesia’s most impoverished and underdeveloped regions. This has included endingthe controversial transmigration program in 2015 and an ambitious infrastructure development program throughout West Papua. Despite this, grievances over historical human rights abuses, an overt military presence in the province, and the exploitation of natural resources has fueled the drive for self-determination.
Most recently, on December 2018, armed separatists from the military wing of the OPM attacked a state-owned construction site, killing31 workers. The year before, tensions over labour disputes, environmental damage, and resentment over revenue distribution from the Grasberg gold and copper mine boiled over resulting in a state of emergency and a violent standoff between OPM-aligned militants and security forces.

The Grasberg mine — the world’s second-largest copper mine — has been at the heart of West Papua’s turbulent history since it began operating in 1967 under US company Freeport–McMoran. Most recently, the Indonesian Government nationalised the mine buying a $3.85 billionmajority share. The purchase came instead of new regulations requiring foreign mining companies to divest their majority stakes in Indonesian operations to local entities.
The most recent push to nationalise Indonesia’s natural resources highlights not only Indonesia’s economic interests but also its desire for control and sovereignty. Maintaining control over West Papua is not only a matter of preserving the nation’s sovereignty but has also been key to Indonesia’s economic prosperity. In the eyes of critical decision-makers in Jakarta, an organised, coherent, and active self-determination movement in West Papua represents a severe threat.

Since the ULMWP announcement, the Indonesian response has been somewhat muted with military officials ‘shrugging off’ the formation of the West Papuan Army. West Papuan separatists have traditionally been treated as ‘armed criminal groups’ and will likely continue to be so unless there is a significant shift in the way the separatists fight.
In response to a gunfight between separatists and the Indonesian military in January 2019, the Chief of Indonesia’s Presidential Staff General Moeldoko floated the ideaof re–categorising West Papuan ‘armed criminal groups’ as separatists. This would place any response to the separatist activity under the jurisdiction of the military as opposed to the police. Such a move would likely draw a stronger military presence; impact mining operations, and have a destabilising impact on both the security and economic environment in West Papua.
Despite the declaration of a West Papuan Army, it remains unlikely that such a group would be able to mount significant and organised offensive and defensive operations in West Papua. Separatists groups remain ill-equipped, poorly disciplined, and under-trained. Furthermore, the historically factionalised nature of the movement and personal loyalties to individual commanders will likely cause in-fighting and possible conflict between the newly amalgamated groups. It is also likely that factions operating in areas with high-value natural resources, such as the Grasberg mine, will prioritise the prosperity of their communities over the overarching policies of the ULMWP.
--------------
Posted by AWPA Sydney News at 2:20 PM No comments: