Media release 30 April 2016
AWPA condemns the arrest of 41 KNPB activists in Jayapura
The Australia West Papua Association condemns the arrest of 41 KNPB activists in Jayapura on Friday 29 April, reported by surapapua.com. The activists were arrested simply because they were handing out leaflets informing people of a rally to be held on the 2nd May. The purpose of the rally was to  commemorate and protest  the tragic betrayal of West Papua by the international community when  West Papua was handed over by United Nations Temporary Executive Authority (UNTEA) to  Indonesian administration on the 1st of May 1963, 53 years ago. The KNPB also called on people to show support for the meeting of the International  Parliamentarians for West Papua in London.
Joe Collins of AWPA said “ hopefully those arrested will be released and the security forces will not interfere with any peaceful rallies that take place on the 2 May. It should be remembered on the 1 May last year up to  270 people were arrested. The arrests of activists on Friday the 29 April are obviously an attempt by the security forces to  intimidate local people into not taking part in any rallies called”.
“Joe Collins said , hopefully the international community is beginning to realise that  if West Papuans are continuing to protest after 53 years of Indonesian administration, willing to face arrest and torture, then their cries of help to the international community should be heeded. A good start would be for the PIF countries to continue to press Jakarta to allow a PIF fact finding mission to West Papua”.
ends

Posted by AWPA Sydney News at 11:13 PM No comments:

2) After Meeting with Luhut, Papua Governor Expresses Disappointment
3) MSG Summit Postponed
4) West Papua to Have Its Own Bullet Train Network

By ADMIN | Published: APRIL 29, 2016
Indigenous land owners from the Marap people in Arso have used customary law to take back oil palm land owned by PT PN II as part of its Arso plantation, specifically the Core III, Core IV and Core V divisions. The action took place at Yamara village PIR 3, Manem sub-district, Keerom Regency, on Wednesday 27th April.
Maickel Fatagur, the head of the Fatagur clan which holds customary land rights, alongside other clans such as the Wabiager and Gumis clans, said that they will no longer hold any kind of meetings with the company. That is because they have used customary law to take back the land PTPN was using.
“We’e used customary law to take the land back. That means now there will be no more meetings with the company. The land now belongs to us. We invite PTPN II Arso to take back its oil palm and we will take back our land. That’s all”, Fatagur made clear to the Manager of PTPN II’s Arso plantation on Wednesday at Tami in Manem District, in Keerom.
According to Maickel, PTPN II has operated the Arso plantation on the Fatagur clan’s land, and that of its sub-clans, for around 30 years, but the local community, who hold the customary land rights, have never felt economically secure
“All these years attention has never been paid to the wellbeing of the community who hold the customary land rights on the land used by PTPN II Arso at the three locations in question, Core III, Core IV and Core V, which amount to 1300 hectares”, said Fatagur.
Dominika Tafor, the secretary of the Boda Student Association (Himpunan Mahasiswa Boda) in Keerom who is also an indigenous member of the Marap ethnic group, said that she was supporting the action taken by local indigenous people.
“We strongly support the action which the Marap community of Workwama village are taking today. We support it, because for so many years the company has not paid attention to the fate of the community. They only come to destroy”, she said.
When the indigenous people arrived at the plantation office in Tami, PTPN II’s Arso plantation manager, Hilarius Manurung, recieved them and said that he would take their wishes on board and pass them on to the Keerom local government.
“Since we’re a state owned company, we can only listen to all aspirations and complaints and pass them on to the local government for further action. There’s not much we can do. What we can do is to follow up all these complaints from the community,” said Manurung.
Suarapapua.com observed that security forces from the Keerom police headquarters were present, 11 armed policemen in a Dalmas truck, ready to police the Marap people’s action.
The action started from Workwama village at 9-00 am and travelled by truck the 6km to the plantation areas Core III – Core V, bringing a banner which read “we don’t need oil palm, we only need forest #savehutanpapua #savehutankeerom for our grandchildren”
As a symbol, the indigenous people brought soil from the three oil palm locations and taro yams from their gardens, placing them in a noken string bag made from forest palm frond midribs, and using traditional rituals took them to PTPN II’s office located in the plantation administration centre in Tami.
HARUN RUMBARAR
Source: suarapapua.com http://suarapapua.com//read/2016/04/27/3305/tiga-lokasi-perkebunan-sawit-di-arso-di-tarik-kembali-oleh-masyarakat-adat-suku-marap
Posted by AWPA Sydney News at 2:15 PM No comments:

2) MSG leaders summit postponed
—————————————————————————————————
http://www.radionz.co.nz/international/pacific-news/302618/pacific-leaders-head-to-uk-for-west-papua-meeting
1) Pacific leaders head to UK for West Papua meeting
12:34 pm today
Several Pacific leaders are headed for London to participate in the International Parliamentarians for West Papua meeting at Westminster.
The IPWP is a cross-party global network of politicians who support self-determination for West Papuans, the indigenous people of Indonesia's Papua region.
The two-day meeting next week will also be attended by representatives of the United Liberation Movement for West Papua and several heads of government, including the Prime Minister of Tonga, Akilisi Pohiva.
This comes as a public march in support of West Papuan self-determination was this morning held in Port Vila, the capital of Vanuatu.
Vanuatu is to be represented at the London meeting by its Minister for Lands, the Port Vila MP Ralph Regenvanu.
Mr Regenvanu said there was much to discuss as the political climate over West Papua has changed significantly over the last year.
In 2015, the Liberation Movement achieved observer membership in the Pacific sub-regional organisation, the Melanesian Spearhead Group.
Mr Regenvanu said this reflected growing international support for the West Papuan people to realise their rightful aspirations for a genuine process of self-determination.
The London meeting will be discussing a strategy to bring about an internationally supervised vote in West Papua by the end of the decade.
In addition to this meeting, there will also be a Conference in Oxford held the day before, next Monday, titled 'The Day of Betrayal', which will revisit the Act of Free Choice from an academic, legal and human rights perspective.
The Act of Free Choice was the United Nations-sanctioned referendum by which Papua was formally incorporated into Indonesia in 1969, however the vote is widely considered as having been stage-managed.
West Papuans claim they were not consulted about the referendum process.

Although some regional governments such as Papua New Guinea and Fiji express strong support for Indonesian territorial control of West Papua, public support for West Papuan independence is steadily growing.
Vanuatu's Free West Papua Association organised a public march towards the MSG secretariat this morning in the country's capital Port Vila.
The march was supposed to coincide with the beginning of a special MSG leaders summit in Port Vila where the group was to appoint a new director-general.
However the summit has now been postponed amid a fallout over Fiji's selection of one if its diplomats as the new MSG director-general.
Before the postponement, Fiji's prime minister Frank Bainimarama announced he would skip the summit because he instead planned to travel to Britain to attend the Queen's 90th birthday celebrations.
Nonetheless hundreds of peaceful demonstrators this morning in Port Vila delivered a petition signed by thousands asking the MSG to grant full membership in the MSG to the United Liberation Movement for West Papua.
They also want the MSG to cancel the associate membership of Indonesia, as proposed by the government of Vanuatu.
The Daily Post quotes Vanuatu Free West Papua Committee member Lai Sakita as saying Indonesia's involvement in the MSG is a mockery to Vanuatu's traditional stand for freedom for West Papua.
Earlier, Mr Sakita called on the many supporters of West Papuan self-determination to come out from behind their computers and personal devices.
"While we appreciate your brave words of support for West Papua on Facebook, we want all of you to prove what you say by coming out to join in this peaceful march to confirm you mean business for the people of West Papua," he said.
————————————————————-
http://www.radionz.co.nz/international/pacific-news/302647/msg-leaders-summit-postponed

3:44 pm today
The Melanesian Spearhead Group Special Leaders Summit scheduled to be held in Port Vila next week has been postponed.
The Vanuatu Daily Post reports that a date is yet to be confirmed, although provisional dates are from May 30 to June 3, depending on the availability and commitments of the Leaders.
The MSG summit had been expected to formalise the appointment of a new director-general for the sub-regional grouping's Port Vila-based secretariat.
However two MSG members, Papua New Guinea and Vanuatu, have objected to the anouncement by the MSG chair, Solomon Islands prime minister Manasseh Sogavare, that the Fiji diplomat Amena Yauvoli had been selected for the role.
Fiji's prime minister Frank Bainimarama subsequently announced he would miss the summit to instead attend the Queen's birthday celebrations in Britain.
The summit was also expected to focus on discussion about West Papua.
While the United Liberation Movement for West Papua was last year granted observer status in the MSG, Indonesia has been lobbying the full members of the group to be granted full membership status.
Jakarta recently claimed to have the backing of Fiji and PNG's governments for full membership.
However Vanuatu's government, led by Charlot Salwai, is pushing for Indonesia's current associate membership status in the group to be cancelled.
It is also backing a bid for the Liberation Movement to be elevated to full membership status.
This morning hundreds of ni-Vanuatu, and some West Papuan representatives, participated in a march to the MSG secretariat in Port Vila.
They delivered a petition signed by thousands asking the MSG to grant full membership to the United Liberation Movement for West Papua.
Posted by AWPA Sydney News at 10:08 PM No comments:

Photos of march in Vanuatu


An inspiring march in Port Vila today, Friday 29 April. The march went from the Fung Kuei car park along the Lini Highway up to the MSG Secretariat where greeted by staff and speeches were made.
Solidarity groups from the region also took part. 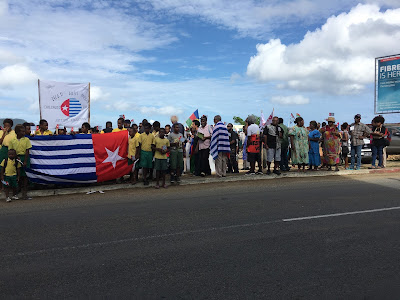 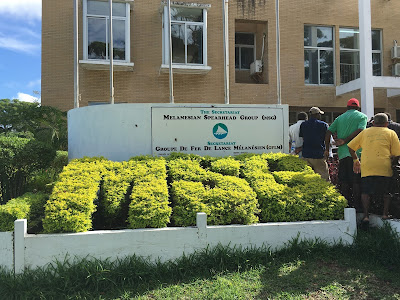 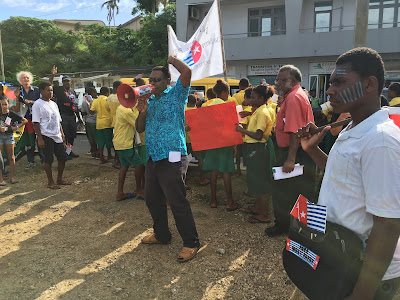 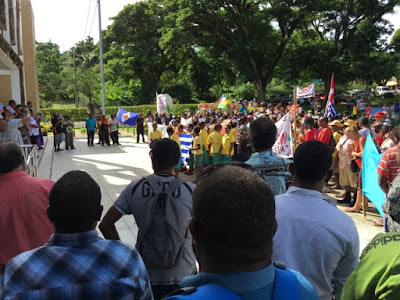 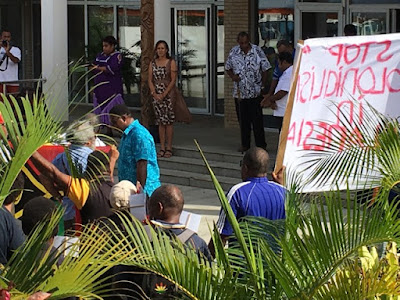 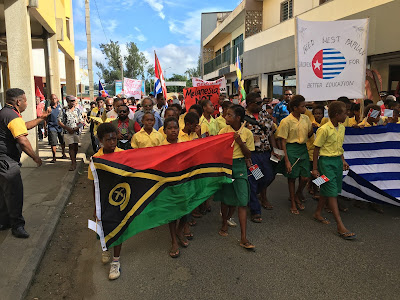 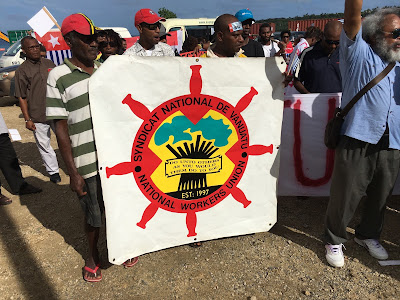 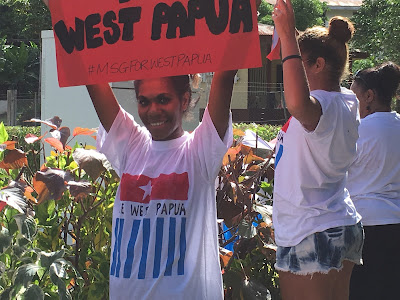 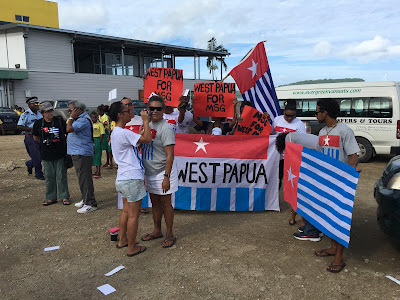 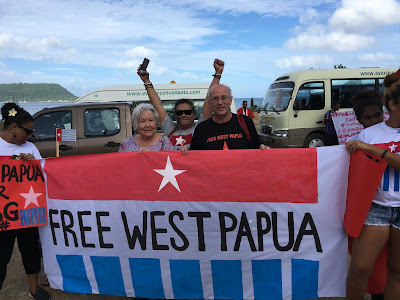 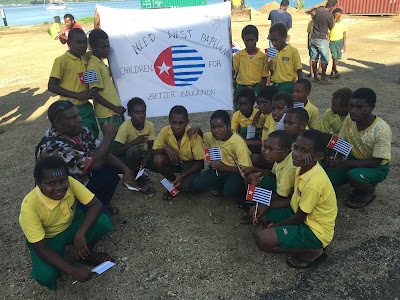 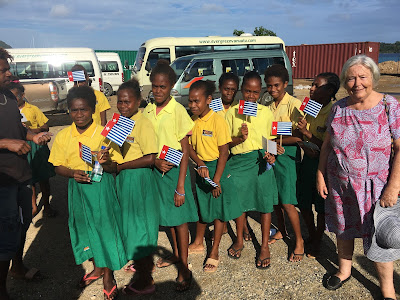 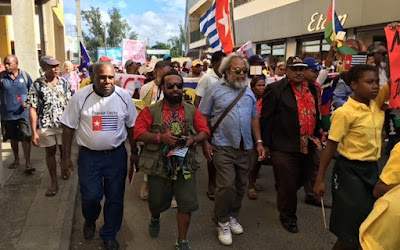 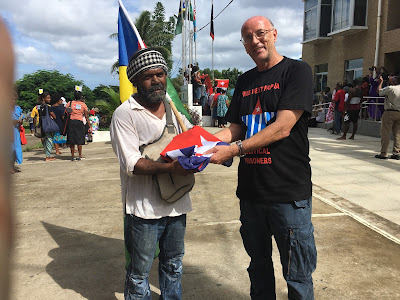 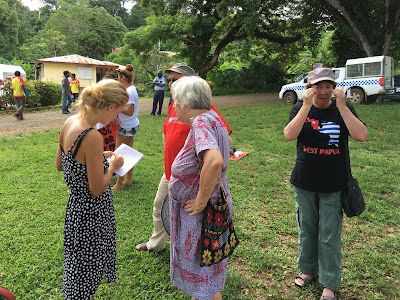 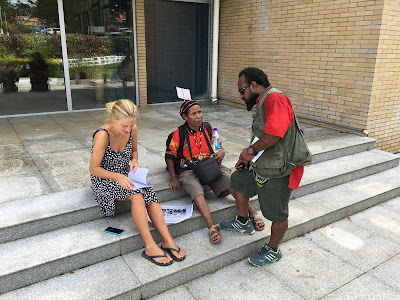 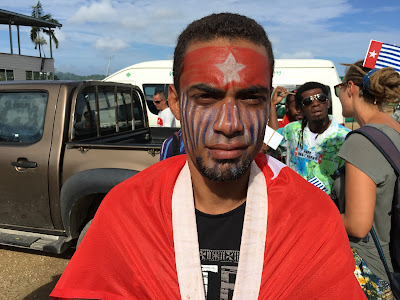 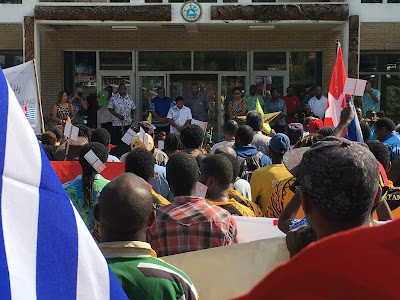 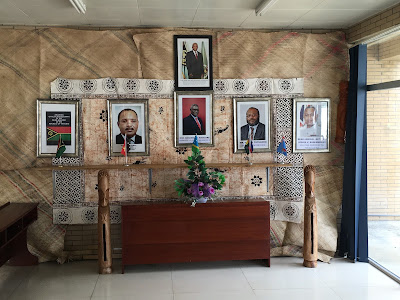 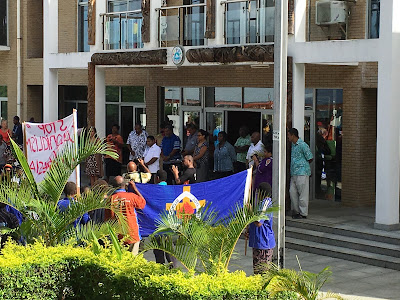 Panjaitan opened the meeting, which was then led by National Police Chief Badrodin Haiti.

The security minister thereafter informed the newsmen that it was the third meeting being held to discuss alleged human right violations in Papua and West Papua.

Panjaitan affirmed that the government was committed to settling cases of gross human rights violations, including the one related to the 1965 tragedy.(*)

APRIL 24, 2016
Dear friends,
Today, on ANZAC Day we remember the incredible commitment of our brave ANZAC heroes who fought and died alongside one another,
helping to keep our region Independent and free.
https://www.freewestpapua.org/2016/04/24/anzac-day-message-2016/
Posted by AWPA Sydney News at 1:56 PM No comments: