Editorial
Prime Minister Tony Abbott will have an opportunity to deliver on his election promise of ''more Jakarta, less Geneva'' by building rapport with Indonesia's president-elect, Jokowi Widodo, at the latter's inauguration on October 20. Mr Abbott's ambitions for the Indonesia relationship were famously interrupted by his uncompromising stance on asylum seeker boats and revelations that Australian agencies had been tapping the Indonesian first lady's phone.
But he was also, of course, making a broader commitment to focus on near neighbours and the Asia-Pacific region. On this score he has not delivered with Indonesia, or with smaller nations in the Pacific, including the crucial neighbour of Papua New Guinea. But he has succeeded in tightening ties with north-east Asia - where the weight of Australia's economic and strategic interests lie.

The high point was his April tour of Tokyo, Seoul and Beijing, where he managed to strengthen economic relations with all three nations without being damaged by the dangerous strategic conflicts between them.
Since then Mr Abbott's foreign policy compass has swung unavoidably towards the immediate threats to Australian lives posed by Russian-backed insurgents shooting down MH17 and the shock expansion of Islamic State (ISIS). But Mr Abbott's resolute and commendable international leadership on Ukraine, ISIS and ''foreign fighters'' does not alter the fact that the weight of Australian interests are much closer to home, where he has a chance of making an enduring, positive impact.

Participating in air raids in Iraq must not divert focus from bigger strategic challenges such as helping to co-ordinate a regional response to China's muscular behaviour, deepening economic relationships with south-east Asia, and stemming the breakdown of governance in Melanesia and especially Papua New Guinea.
In November, Mr Abbott will host the G20 summit of world leaders in Brisbane, as well as separate state visits by China's President, Xi Jinping, and, if all goes to plan, India's Prime Minister, Narendra Modi. It is imperative Mr Abbott grasps these priceless opportunities to refocus on
Australia's long-term interests in this region.

The obvious place to resume the policy of ''more Jakarta, less Geneva'' is at Mr Widodo's inauguration. Mr Abbott needs to demonstrate that the relationship is ''extraordinarily important'', as he put it in his congratulatory message. He needs to rebuild the confidence that was dented by the ''turn back'' boats policy, phone-tapping and a long list of older issues, ranging from Schapelle Corby to Australia's banning of live cattle exports during the holy month of Ramadan.
The trust deficit was articulated by both candidates in the Indonesian presidential campaign debates. The unsuccessful candidate, Prabowo Subianto, said: ''Honestly, I think that the problem is not in Indonesia. Perhaps Australia holds some kind of suspicion towards Indonesia, a kind of phobia.'' And Mr Widodo said: ''There is a problem of trust, which is what led to the spying problem. We are regarded as a weak nation. It's a matter of national respect, a matter of integrity.''
That trust deficit is also evident here in Australia, where Indonesia ranks below China, India and Japan in the popularity stakes, according to a Lowy Institute public opinion poll.
With the rise of Islamist extremism, repeated setbacks to democracy, and economic growth slowing across most of the world, Mr Widodo's predominantly Muslim, rapidly growing and resiliently democratic nation deserves all the support Australia can provide. 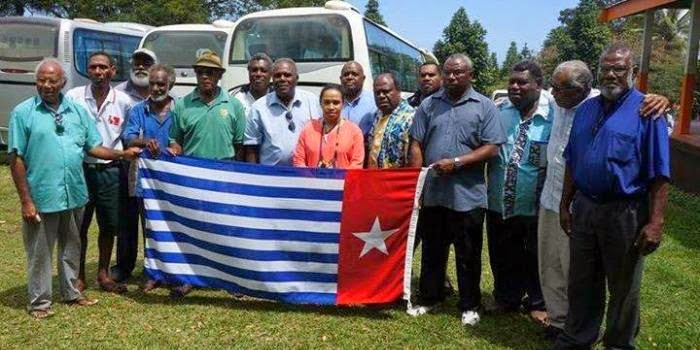 Head of Mission at the Australian WPNCL, Paula Makabory (center) with a number of sympathizers. Photo: Ist

Previously it was reported that the implementation will be postponed until the date of December 4, 2014.

However, the committee has clarified that the activities of the union will be held from November 30 to December 4, 2014.

This confirmation is delivered WPNCL Chief of Mission in Australia, Paula Makabory and distributed by https://www.facebook.com/WPNCL.

Through this clarification, the committee hopes that all parties will be invited soon to prepare for the success of the Conference of the People of Papua. (GE / 003 / Admin / MS)
Posted by AWPA Sydney News at 1:00 PM No comments: 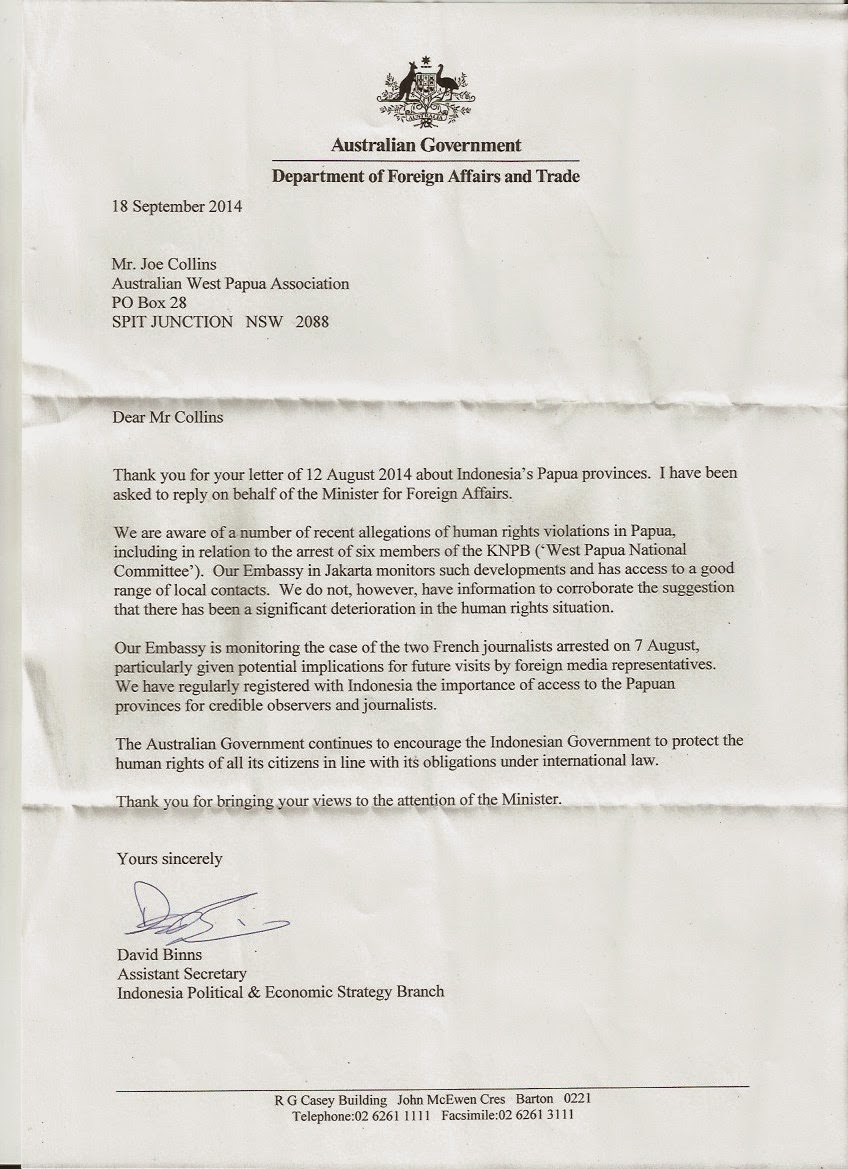 Posted by AWPA Sydney News at 2:08 PM No comments:

1) West Papua meeting confirmed for December
2) Call to lift restrictions on foreign journalists in Papua
3) Blacksteel Group Developing Three Malls in West Papua, at a Cost of Rp 600b

2) Call to lift restrictions on foreign journalists in Papua

The Jakarta Foreign Correspondents Club is calling on the incoming administration of Joko Widodo to immediately lift all restrictions on foreign journalists travelling to the Papua region.
It says it's concerned by the continued detention without charge of French journalists Valentine Bourrat and Thomas Dandois.
The pair were arrested in August in Wamena, and remain detained in Jayapura by Indonesian police, accused of violating their visas.
The Jakarta Foreign Correspondents Club says indications that the pair could face a five-year prison sentence for a visa violation, or even a much more serious charge of sedition, are of particular concern.
It says the larger issue is the continuation of restrictive state policies on journalists reporting in the Papua region and wants all restrictions on foreign journalists travelling to the region lifted.
The club says these restrictions only harm Indonesia's international reputation as a country that values press freedom, and encourages inaccurate and simplistic reporting of the issues in the region.
----------------------------------------------------------------------
http://www.thejakartaglobe.com/business/blacksteel-group-developing-three-malls-west-papua-cost-rp-600b/
Jakarta. The Blacksteel Group, a property developer, is developing three malls in Sorong regent, West Papua, at a total investment of Rp 600 billion ($50 million), the company’s chief operating officer said in Jakarta recently.
“The first project is to build The Plaza Sorong [mall], which is targeted to be completed by end of 2014,” Isaac Bliss Tanihaha, the COO of Blacksteel Group, told Investor Daily.
Isaac, who founded the Blacksteel Group, said that The Plaza Sorong will have the tallest high-rise building in Sorong, at 14 stories. The mall will be supported by Siloam Hospital, retailer Hypermart and a hotel.
The second mall being built is Sorong City Center and another mall is also located in Sorong regent. The three malls had commenced construction in 2013, Isaac added.
”We are cooperating with the Lippo Group. We hope this project will stimulate the economy in the local area,” said Isaac, who is a brother-in-law of Michael Riady.
Michael serves as chief executive of the Blacksteel Group, which is independent from the Lippo Group.
In May Michael had said the company plans to build 17 malls in the next five years and is targeting its development in remote areas of Indonesia.
Posted by AWPA Sydney News at 10:45 PM No comments:

A few more photos from vigil 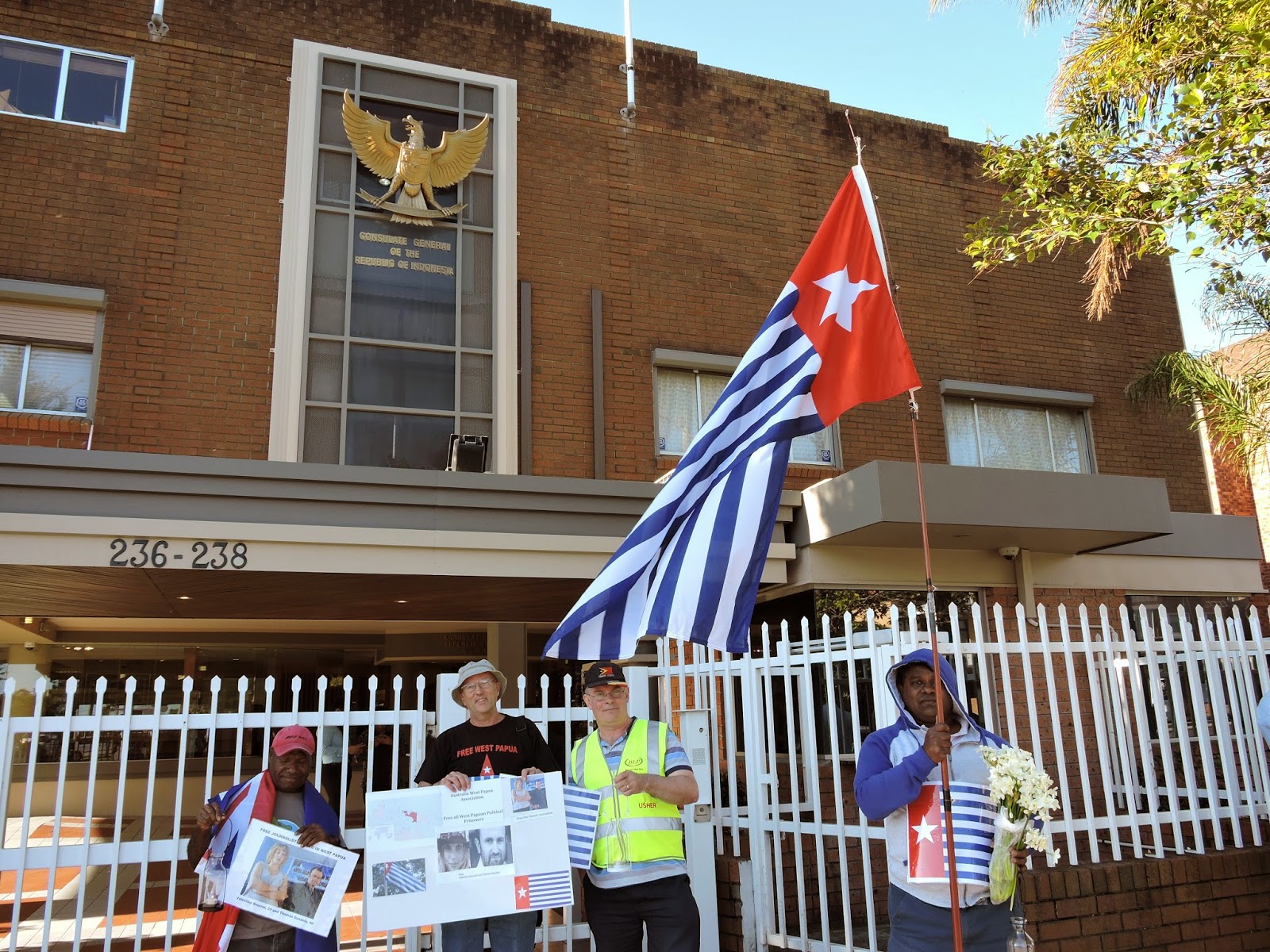 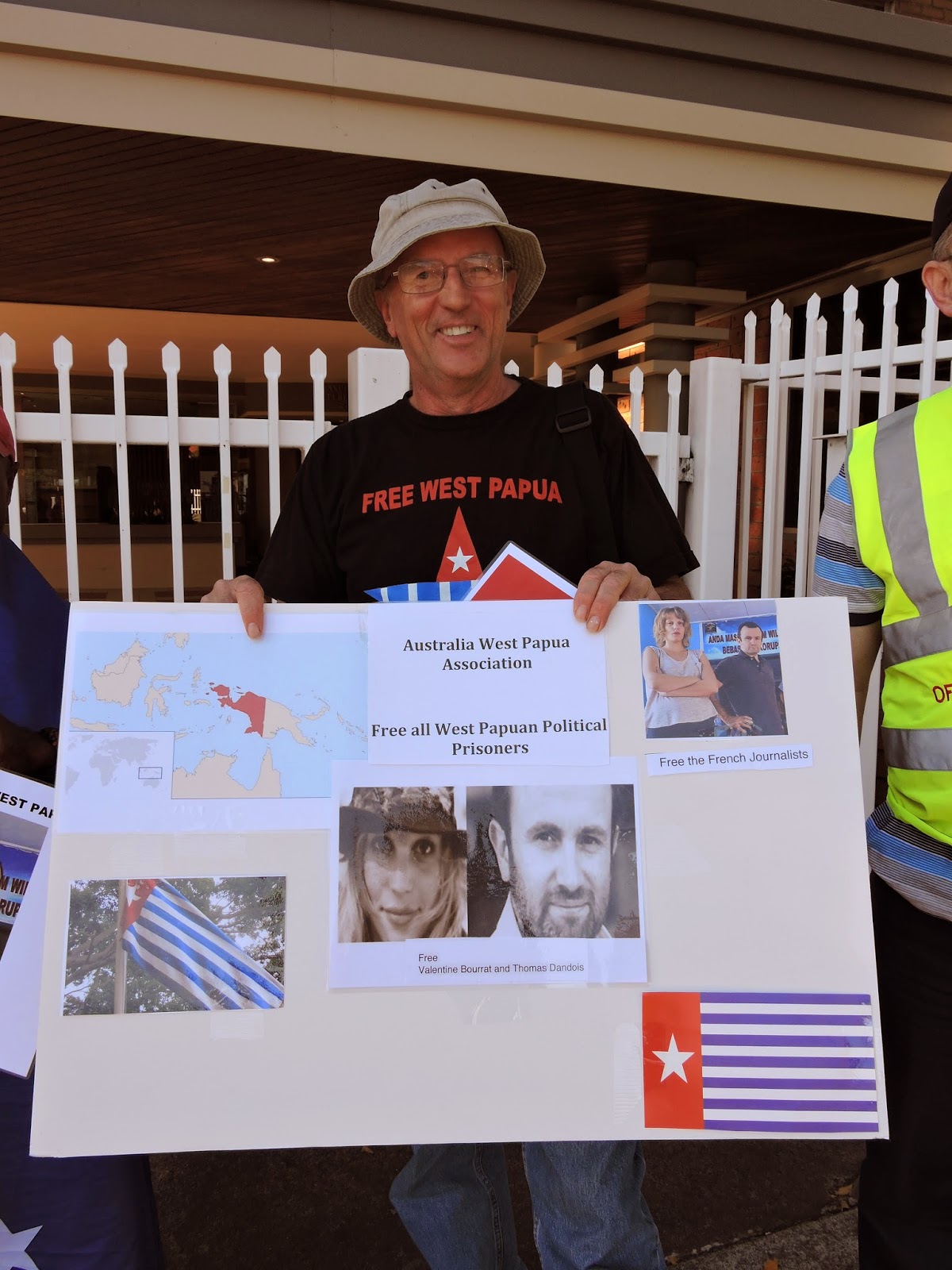 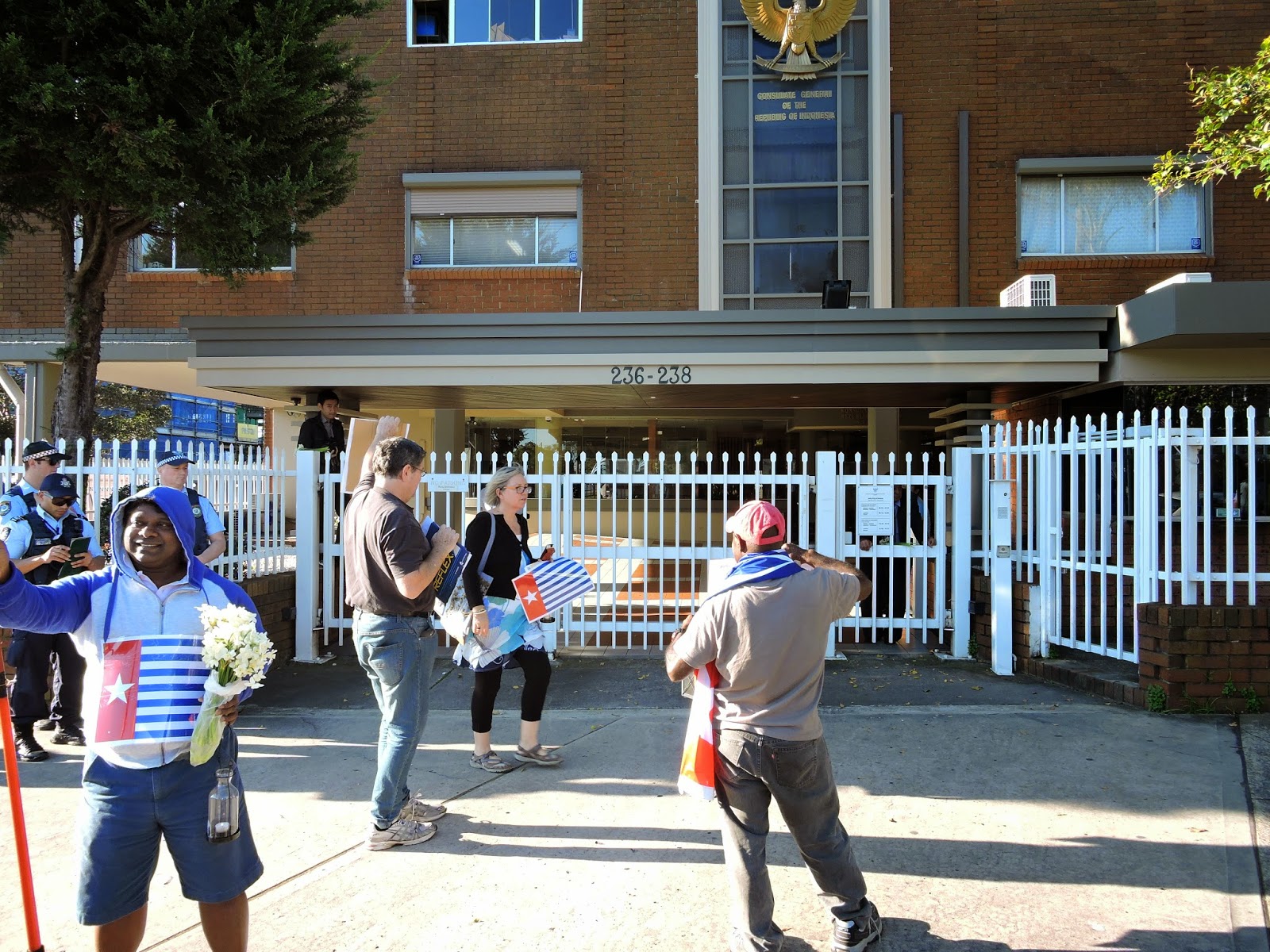 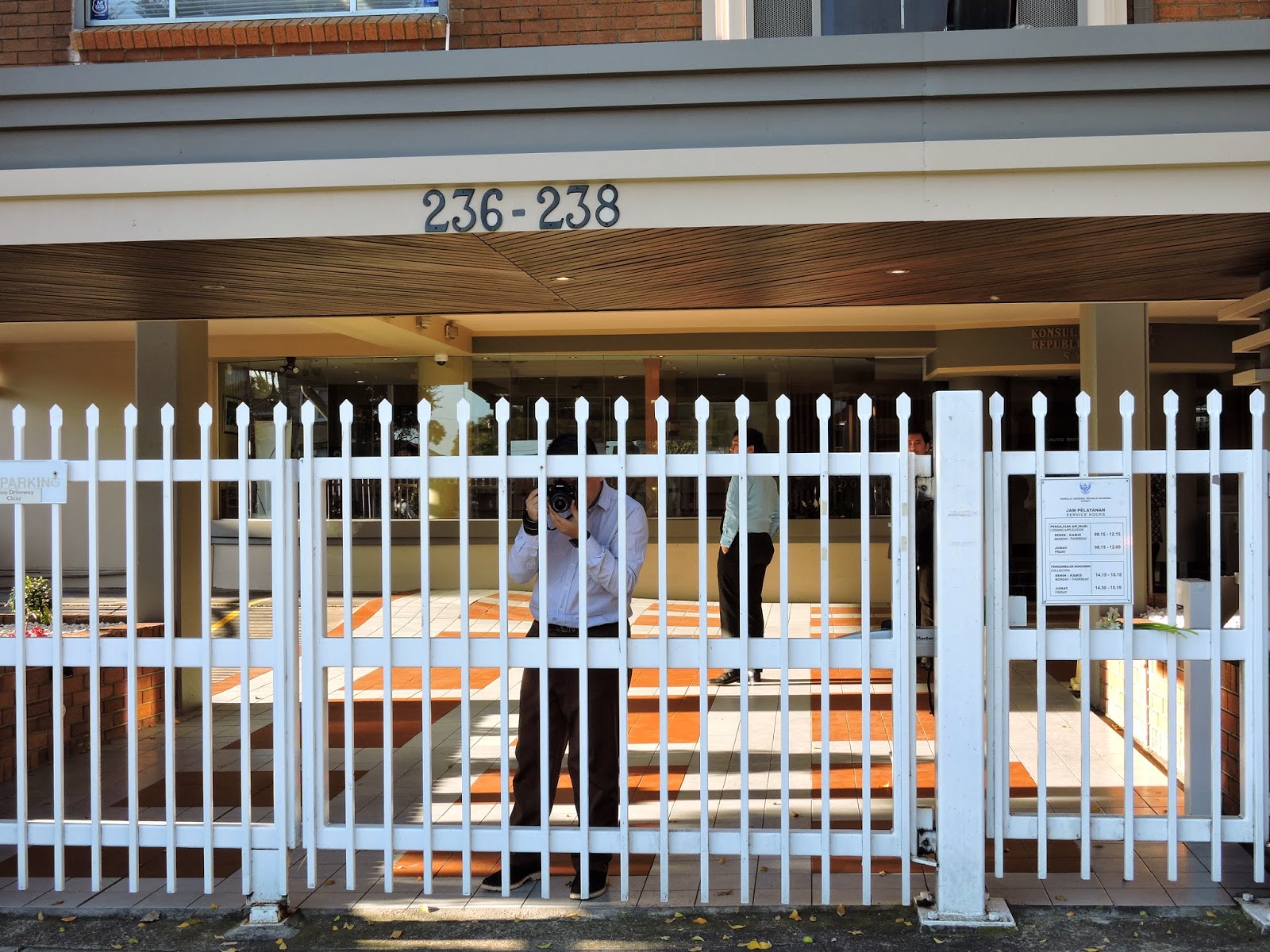 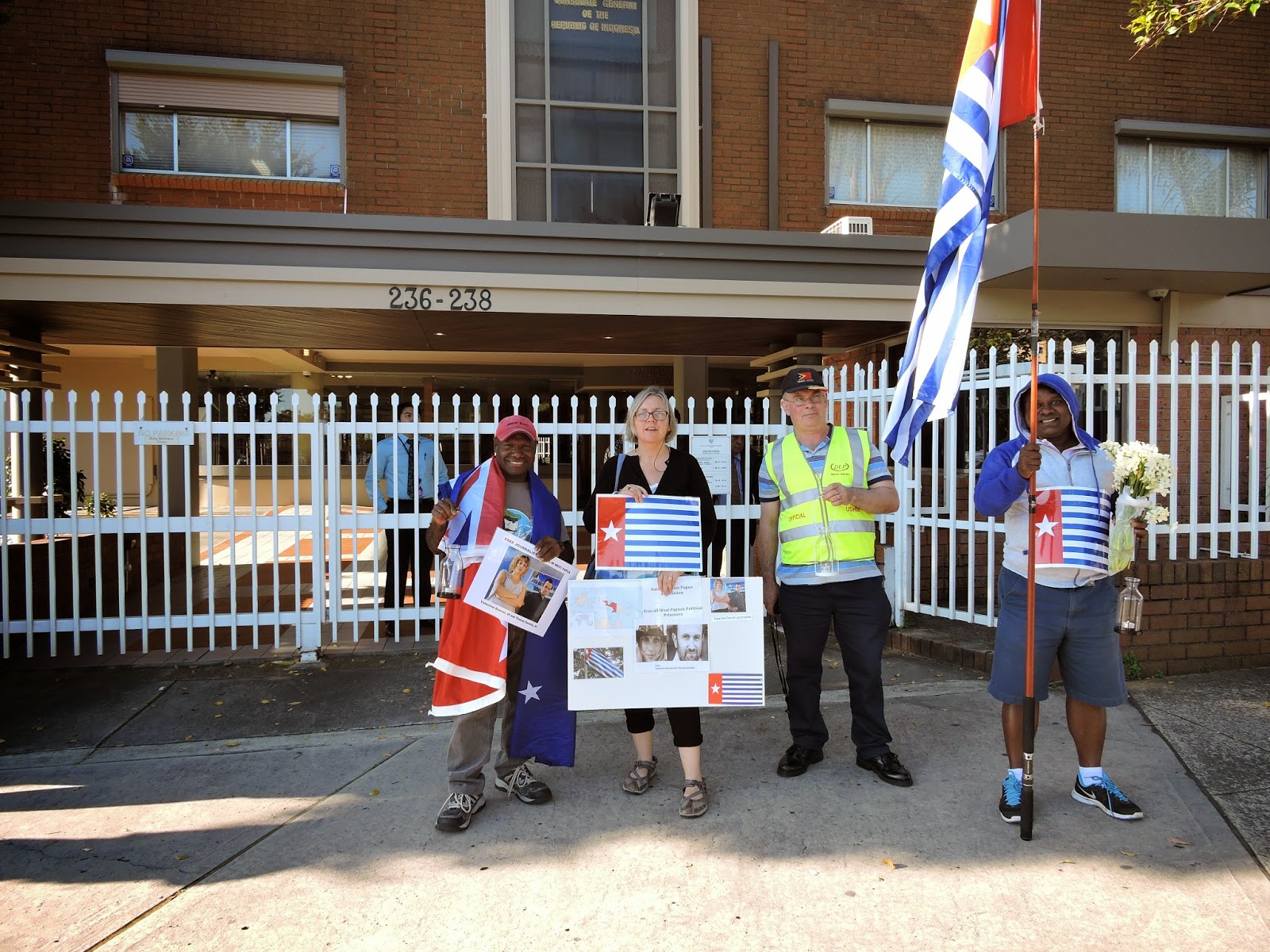 Posted by AWPA Sydney News at 8:31 PM No comments: 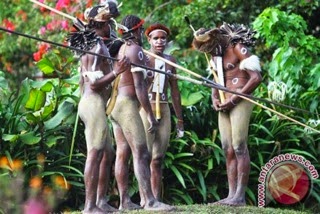 2) Statement by head of LP3BH for the President-elect
Statement by Yan Christian Warinussy, Executive-Director of LP3BH

Posted by AWPA Sydney News at 1:47 PM No comments: