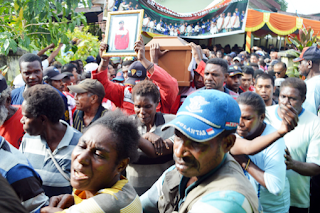 Mourning: Family members and friends take the bodies of Yulianus Okoare and Herman Mairimau, victims of a recent shooting in Mimika regency, Papua, to their final resting place at a public cemetery in Kamoro Jaya village, Mimika Baru district, on Sunday.(Antara/Husyen Abdillah) -
Conducting its own investigation into a recent shooting in Koperapoka, Mimika regency, Papua, that claimed the lives of two civilians, the Indonesian Military (TNI) has promised to serve justice to any soldiers proven to have been involved in the incident.While still questioning three soldiers who were arrested in connection with the incident, Army spokesperson Brig. Gen. Wuryanto said on Sunday that the Timika Military Police were also gathering statements by witnesses, including from locals, who might know how the shooting occurred.“We cannot make any conclusions yet because it is an ongoing process. Our team is digging for information that will lead us to the complete story of how the incident happened,” Wuryanto told The Jakarta Post.“But we will ensure that Military Court law will be strictly imposed on any soldier proven guilty,” he added.The incident occurred in the early hours of Aug. 27 and claimed the lives of 23-year-old Imanuel Mailmaur and 23-year-old Yulianus Okoare. Two other locals were injured in the incident — 24-year old Marthinus Apokapo, who suffered a gunshot wound to the abdomen, and 25-year old Martinus Imapula, who was shot in the leg.The District Military Command (Kodim) 1710/Timika arrested two soldiers following the shooting — First Sgt. Arshar and Chief Sgt. Makher, who were reportedly drunk when they allegedly shot the men.Besides the two soldiers, Wuryanto said that one more soldier, identified only as Chief Pvt. G, was at the location when the shooting took place and had been detained.“We are still examining his involvement in the matter,” Wuryanto said. “However, regardless of the ongoing process, the Cendrawasih Military Command chief [Maj. Gen. Fransen G. Siahaan] has personally apologized to the families of the victims for the incident and ensured that the TNI will be responsible for the investigation.”Two different versions how the shooting occurred have emerged so far.According to the Military Command (Kodam) XVII/Cendrawasih, the soldiers shot in self-defense when a mob attempted to seize their weapons after an attack on Makher.The other story circulating among residents claims that two men, later identified as Makher and Arshar, forced their way into a venue where a party was being held and threatened people at the party.The National Commission on Human Rights (Komnas HAM) will also send an investigative team to clarify the stories.Komnas HAM chief Nur Kholis said the investigative team aimed to gather evidence to get reliable information from the field as the rights body frequently came up with different findings than the government, which it publicly announces.“Several shootings have taken place in Papua and none of them have been publicly clarified by the government,” he said. “Relevant government institutions conducting investigations into similar shootings in the past kept silent about the results without clear and transparent follow ups”.He cited the shooting in Papua’s Paniai in December last year that claimed the lives of five locals as an example.“The lack of transparency in investigations into several shootings in Papua has in a way encouraged more incidents to emerge. This must stop,” Nur Kholis emphasized.
————————————————————————
http://www.radionz.co.nz/international/pacific-news/282902/pacific-church-leader-condemns-west-papua-killings
2) Pacific church leader condemns West Papua killings
Pacific churches have condemned the killing of two West Papuans in a shooting involving Indonesian soldiers last week.
They have called on regional leaders to speak out against summary killings, torture and human rights abuse in the Indonesian region.
The church says reports from Timika in Mimika Regency say a group of Special Forces troops shot dead two members of the Catholic Youth Group at the Cathedral Parish of the Three Kings in Timika.
At the time the Kamoro people were performing traditional rituals.
The Council says the soldiers, who were refused entry to the area, went to their barracks, returned with weapons and fired on the group.
The General Secretary of the Pacific Council of Churches, Rev Francois Pihaatae, says the killings were uncalled for and an indication of Indonesia's contempt.
He says Pacific leaders have a duty to speak out, especially those who have invited Indonesia into the Melanesian Spearhead Group.
-------------------------------------
Posted by AWPA Sydney News at 1:41 PM No comments:

7) Escaped Prisoners in Wamena Still on the Run

——————————————————————
http://www.thejakartapost.com/news/2015/08/29/timika-bishop-condemns-deadly-shootings.html
1) Timika bishop condemns  deadly shootings
thejakartapost.com, Jakarta | Archipelago | Sat, August 29 2015, 4:47 PM -
Timika bishop John Philips Saklil has condemned the shootings by military personnel that killed two people and wounded several others in Mimika regency, Papua, early Friday.
“The Church condemns violence, even more so when it causes deaths. Any act of violence will never solve problems,” the Bishop was quoted by tempo.co as saying.
Saklil, however, called on the people of Papua to calm down, telling them not to take revenge because fresh violence could cause harm to more innocent victims. He called on people to entrust the case to law enforcers.
A pastoral officer at Timika Church said that the incident occurred when local people organized a Tifa (Papuan drum) beating festival to celebrate the success of a Catholic resident in earning a doctoral degree in the Philippines.
Two drunken men reportedly wanted to join the event, but residents rejected them because they were drunk. The two men, who were later found to be soldiers, left the scene before returning with a gun and bayonet.
Previously, a resident said that the incident occurred when two soldiers opened fire in Timika Baru district, Mimika. Kompas.com reported that people who were partying on the road scolded the soldiers for driving fast, resulting in the soldiers challenging the group. The soldiers reportedly opened fire when they felt they were cornered. (bbn)
——————————————————————————
http://www.thejakartapost.com/news/2015/08/29/soldiers-held-after-fatal-shooting-papua.html
2) Soldiers held after fatal  shooting in Papua
Nethy Dharma Somba, The Jakarta Post, Jayapura | Headlines | Sat, August 29 2015, 6:14 PM -
Two members of the Military District Command (Kodim) 1710/Timika have been arrested following a shooting in Koperapoka, Mimika regency, Papua, that left two civilians dead and two others wounded.The two soldiers, First Sgt. Arshar and Chief Sgt. Makher, were detained by the military police sub-detachment XVII-I/Cenderawasih.“[If] both are guilty they have to be held accountable for what they did. They will undergo the legal process,” the commander of 174/Waning Ap Merauke, Brig. Gen. Supartodi, told The Jakarta Post on Friday.The incident occurred on Thursday at 1:33 a.m. local time. The dead victims were identified as Imanuel Mailmaur, 23, and Yulianus Okoare, 23. The injured were named as Marthinus Apokapo, 24, who suffered a gunshot wound to the abdomen and Martinus Imapula, 25, who was shot in the leg.Supartodi alleged that the soldiers were drunk when the shooting took place. So far two versions of the shooting have emerged. The first version was in the form of a press release by spokesperson for the Military Regional Command (Kodam) XVII/Cenderawasih, Lt. Col. Teguh Pudji Raharjo.According to the release, the soldiers shot in self defense as a mob attempted to seize their weapons after an attack on Makher. However, the press release gave no reason as to why the mob attacked Makher.The release said that upon receiving a report from locals about the attack on Makher, Ashar went to the scene to look for his colleague but was attacked on the way, beaten to the ground and attempts were made to take his weapon, whereupon he opened fire and the four civilians were shot, two fatally.Santon Tekege, a pastoral staff member at Timika Diocese, denied that any attempts were made to grab the soldiers’ guns.According to Santon, the shooting occurred when two drunk individuals — who were later identified as soldiers — arrived at a tifa (traditional drum beating event) in the yard of Koperapoka Catholic church, the tifa was being held as a thanksgiving party for the first person of Kamoro origin, Leonardus Tumuka, to earn a doctoral degree.“They [soldiers] were refused admission and they left. Shortly after they returned, carrying rifles with bayonets and frightening the people who were celebrating,” Santon said.Both men forced their way into the venue and threatened people at the party. Later as they were leaving they opened fire, killing two and injuring two others, he said.Papua Police Chief Brig. Gen. Paulus Waterpauw is currently in Timika to maintain order in the area.Coordinator of the Papua office of the Commission for Missing Persons and Victims of Violence (Kontras), Olga Helena Hamadi, said she had received frequent reports about civilians being shot by members of the security forces in Papua.“It’s a classic [response] to say that the security forces personnel fired in self-defense,” said Olga, adding that the excuse was often made in such incidents.Separately Pastor Amandus Rahaded said the bodies of the victims were being held in Koperapoka Catholic Church. No date has so far had been scheduled for their funerals. “Their families are still having talks and waiting for the arrival of the Kodam Cenderawasih commander,” Amandus said.The two bodies had previously been paraded to the Kodam base and placed in the middle of the street. They were moved to the church only after negotiations were held with the Papua police chief mediated by Amandus.

http://jakartaglobe.beritasatu.com/opinion/commentary-defending-indonesias-fragile-media-freedom/
Commentary: Defending Indonesia's Fragile Media Freedom
By : Phelim Kine | on 05:28 AM August 29, 2015
Category : Opinion, Commentary, Front Page
Indonesia’s hard-won media freedoms have just dodged a bullet.
On Aug. 26, President Joko Widodo revoked a new regulation that would have imposed onerous restrictions on foreign media in Indonesia. Home Affairs Minister Tjahjo Kumolo subsequently apologized to the president for the “confusion” created by the now-canceled regulation. The proposed regulation was all the more puzzling given Joko’s announcement on May 10 that lifted the restrictions on access to Papua for accredited foreign correspondents. The willingness of some senior officials to even consider such measures is an alarming indicator of the disregard for media freedom among some elements of Joko’s government.

The regulation would have required foreign journalists to get permission from local authorities as well as the State Intelligence Agency (BIN) before doing any reporting in the country. The Home Ministry’s director general of political and general administration, Soedarmo, justified the rule as a means “to monitor all activities of foreign journalists in Indonesia.” The officials behind the rule went so far as to envision a new Foreign Ministry-supervised “Coordination Team of Foreigners Visitation taskforce” staffed by BIN and National Police personnel to vet the reporting plans of foreign journalists.

The proposed regulation was more than just a sinister throwback to the authoritarian media restrictions of the Suharto dictatorship, which collapsed in 1998 after three decades in power. The Indonesian nongovernmental media freedom group Independent Alliance of Journalists (AJI) rightly recognized  the rule as an effort to extend nationwide a longstanding restriction on foreign media reporting that previously applied only to the provinces of Papua and West Papua.

For more than three decades, accredited foreign media seeking to travel to Papua have had to apply for that accessthrough a Ministry of Foreign Affairs-supervised interagency “Clearing House” that included representatives of the National Police and BIN. The agency served as a strict gatekeeper by either failing to approve applications for Papua access -- placing journalists in a bureaucratic limbo -- or routinely denying the applications outright. On June 17, the Foreign Ministry announced that it had abolished the “Clearing House” in line with Joko’s May 10 directive. But the proposed “Coordination Team of Foreigners Visitation taskforce” suggests that elements within the government want the “Clearing House” revived and expanded.

These attitudes reflect the uphill battle the president faces in trying to restrain the censorship reflexes of elements of the government and security forces who want not only to maintain their foreign media chokehold on access to Papua, but to make it a template for all of Indonesia. Joko deserves credit for defying them by opposing policies that restrict freedom of expression. But it’s clear that he will need to remain vigilant in ensuring that all elements of his government and the security forces respect, not restrict, media freedom in Papua and beyond.
Phelim Kine is the deputy Asia director at Human Rights Watch.
Posted by AWPA Sydney News at 1:40 AM No comments: