http://www.thejakartapost.com/news/2015/05/28/jokowi-urged-explicitly-spell-out-papua-s-media-freedom.html1) Jokowi urged to explicitly  spell out Papua’s media freedom -
The Jakarta Post, Jakarta | National | Thu, May 28 2015, 11:10 AM -
Human Rights Watch (HRW) deputy Asia director Phelim Kine has said President Joko “Jokowi” Widodo should issue an explicit written directive spelling out Papua’s new media freedoms and the obligations of government officials and security forces to respect it, otherwise he could not turn his vision into reality.
He made his comments in response to recent statements by two of Jokowi’s Cabinet ministers, Coordinating Political, Legal and Security Affairs Minister Tedjo Edhy Purdijatno and Defense Minister Ryamizard Ryacudu, which contradicted the President’s promise to lift restrictions on foreign journalists covering Papua.
“The willful ignorance or outright hostility of key ministers such as Purdijatno and Ryacudu will doom that plan unless President Jokowi addresses their obstructionism head-on,” Kine said in a statement on Thursday.
The rights activist said that on May 26, or just two weeks after Jokowi signaled a shift in Indonesia’s long-standing policy on media freedom in Papua, Tedjo told reporters that a team including Indonesian Military and National Police personnel would continue to tightly monitor foreign journalists who reported from Papua.
“Purdijatno defended the agency’s snooping by asserting that, ‘We aren’t spying on them [the journalists]. We’re simply monitoring their activities’,” he said.
On the same day, he said, Ryamizard explained that if access to Papua was granted to journalists, it came with an obligation to produce “good reports.”
“Ryacudu didn’t precisely define ‘good reports’, but he explicitly equated foreign journalists’ negative Papua reporting with ‘sedition’,” Kine said.
"Ryacudu’s solution for foreign media whose reporting displeases the government: ‘We can easily expel them’,” he said, quoting the minister.
Kine said that until the President issued an explicit written directive, media freedom in Papua would continue to be held hostage by those who preferred Papua’s truths remained hidden rather than reported. (ebf) 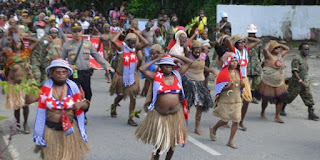 Information compiled majalahselangkah.com until this afternoon, 75 people reportedly arrested by the police and 5 is among others were wounded when captured in this demonstration in four different cities, Jayapura, Wamena and Nabire.

Yesterday, on Wednesday (05.27.15), police in Papua have confirmed there is no permission for this pre-national action. However, KNPB precisely assess the police erred in interpreting the Notice and License.

KNPB members were arrested by police at the gate Uncen:

KNPB members were arrested by police at Expo Waena:

KNPB members were arrested by the Police in Papua Province DPRP office:

In Wamena, Chairman Agus Kossay 1 KNPB Center and 25 other people were arrested.

Nabire, Japheth Keiya and Obet Munipa captured during a press conference in Oyehe.

Japheth Keiya is KNPB activists. However, based on information received majalahselangkah.com, Obet Munipa are citizens who happened to be at the press conference area.

Earlier, in action with the same purpose, namely to support ULMWP a member of MSG, hundreds of Papuans were arrested dititik togethers action, before the action begins. Having examined the local police, they were sent home.

On May 1, 2015, the annexation of Papua into Indonesia, recorded, there were 269 people arrested Papuans. Manokwari 217 people, 15 people Merauke, Jayapura 30 people, Kaimana 2, Fak Fak 2 people, and Surabaya 3 people and 2 people in Nabire shot. (Read: ULMWP: 269 People Arrested on May 1, Civil Emergency Applicable in Papua).

Even distributed leaflets peaceful demonstrations on May 21, 2015 to the people of Papua, on Wednesday (05/20/2015), at around 13:00 CET, as many as six activists KNPB Sentani region, Jayapura district, was arrested by the police (Read: Extension leaflet of Action, 6 KNPB Activists Arrested Police).

3) 47 would-be protesters  taken into custody
Nethy Dharma Somba, The Jakarta Post, Jayapura | Archipelago | Thu, May 28 2015, 6:59 PM -
The Jayapura Police took into custody 47 would-be protesters who were preparing for a rally in support of Papua's efforts to secure membership in the Melanesian Spearhead Group (MSG) in Jayapura on Thursday.
“The 47 demonstrators have been taken into custody and questioned about a protest they were to carry out today. From the 47 people, we will examine who was the coordinator or mastermind of the rally and who were just followers. For the followers, we will release them after taking their fingerprints, but for the coordinator, we will process him or her further,” said Jayapura Police deputy chief Comr. Albertus Andrian, adding that five out of the 47 protesters were female.
He said police arrested the 47 individuals at three gathering points, namely the Waena Expo Hall and the University of Cendrawasih campus, both in Waena, and Imbi Park, which is in Jayapura.
Albertus said the planned demonstration had not received a permit from the Jayapura Police. “Their acts are against the state apparatuses,” he said.
Albertus said the police would charge the ringleader of the planned rally with violating Article 160 of Criminal Code (KUHP) on instigating people to fight against the government, which carries a maximum sentence of six years in prison. (ebf)(+++)


http://www.radionz.co.nz/international/pacific-news/274910/dozens-of-activists-arrested-during-papua-protest
4) Dozens of activists arrested during Papua protest
Updated about 1 hour ago
A Papuan separatist group, the United Liberation Movement for West Papua, or KNPB, says as many as 30 of its members were arrested on Thursday by Indonesian security officials.
The group has been pushing for freedom of expression for West Papuans and is seeking international backing for the KNPB to join the Pacific sub-regional political body, the Melanesian Spearhead Group.
The KNPB says up to 32 activists were arrested as they staged a protest in Jayapura.
It is the third time this month that large numbers have been taken into custody during rallies.
Over 250 were arrested in various rallies during the May 1st annexation events and another 70 last week in another rally supporting the MSG membership bid.
Posted by AWPA Sydney News at 2:38 PM