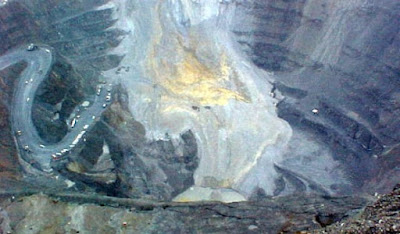 After pumping billions into the Indonesian copper mine for almost 25 years, Rio Tinto might finally be about to see a decent return. Supplied
For the best part of a quarter of a century Rio Tinto has struggled to extract any sort of return from its still accumulating $US2 billion investment in the routinely controversial Grasberg copper mine in Indonesia.
But some sort of pay day seems close at hand. Rio's 40 per cent share in future production from the mine in the West Papua skies is emerging as a pivotal subject of dispute in the latest tug-of-war between Grasberg's developer and senior owner, Freeport-McMoRan, and the Indonesian government.
Indonesia's endgame is to inflate the level of local ownership of Grasberg from 9.36 per cent to a controlling 51 per cent. And, after years of bickering that most recently saw Freeport's copper export licences suspended for 15 weeks, Freeport's resistance of that ambition appeared to crack with a late-August agreement between miner and government on the pathway to nationalisation.
The deal signed on August 28 by two Indonesian government ministers and Freeport's pugnacious chief executive, Richard Adkerson, was described as a "framework agreement". That has proved to be a brave call. As it turns out, the agreement carried with it very little in terms of structure or definition. And, as a result, company and government are once again at loggerheads.
The return to more familiar levels of tension between miner and sovereign host was revealed in a letter penned recently by Adkerson that was leaked last week to Reuters. It revealed disputes over the structure and speed of the agreed sell-down and of the mechanics of valuation of the shares to be sold.
But, more importantly from Rio shareholders' point of view, the letter also revealed dispute over the fate of the Anglo-Australian's 23-year-old production share agreement with Grasberg.
The Reuters report, that remains uncontested by Freeport, reveals a government demand that Freeport's joint venture with Rio be "concluded" before the divestment process. It also reveals Freeport's blunt rejection of that request.
The background there is that Rio has made it publicly plain that it is more likely to fold than hold its stake in Grasberg. New boss Jean-Sebastien Jacques publicly questioned Grasberg's place in Rio's future back in February. He followed in June with the observation that Grasberg was a world-class copper deposit but might not be a world-class mining investment.
We have previously suggested that Rio might well be working to exit Grasberg by Christmas. But that looks rather ambitious given the angry complications that have emerged.
All of this announces that Rio's desperately frustrating share of the Grasberg mine has not been more commercially strategic since Freeport went shopping for financial partners back in 1994.
To digress momentarily, Freeport's international auction of some Grasberg copper action was the original trigger to the merger that created the original Anglo-Australia dual listed miner.
The lure of a share in the massive copper discovery saw UK listed RTZ Corporation and its independent Australian cousin, CRA Limited, unknowingly bidding against each other for a share in Freeport's project. The complex and probably excessive $US1.3 billion deal struck by RTZ in 1995 was promptly followed by an even more complex, controversial and demonstrably more successful 1996 deal that was the 1996 merger that created Rio Tinto.
RTZ's 1995 deal with Freeport saw it acquire $US450 million of the US miner's stock. It also agreed to spend $US850 million on the exploration and appraisal that subsequently defined the targets for the big underground mine that is currently under development. This mine sits critical to Rio recovering value from the original investment.
For its cash, Rio now owns a 40 per cent share of production above 118,000 tonnes from Grasberg's A block and a call over 40 per cent of all production from a trigger point that was originally set at 2021 but will not now be hit until maybe 2023 at the earliest.
Back in 2004 Rio recovered $US1 billion of its investment in selling its Freeport position. But otherwise the deal has been a stinker. Rio has all too rarely booked meaningful tonnes of Grasberg production and it has booked no metal off-take over the past two years. And meanwhile it is required to fund its 40 per cent share of the expansion project. That is estimated to have cost Rio about $1 billion over recent years and the costs will rise as the underground project matures.
Back in June we imagined here that delivery of Rio's 40 per cent of future production to Indonesian owners might offer a convenient and uncontroversial pathway to sating the government's nationalisation push. But in offering that option we foolishly ignored the mitigating potential that Rio's 40 per cent might hold for Freeport.
The reality is that, having agreed to reduce its ownership of Grasberg to 49 per cent, Freeport cannot afford to let Rio stay.
Why not?
Well, do the math. The Rio arrangement would leave Freeport with rights over marginally less than 30 per cent of future Grasberg production.
The government position would appear to be that the Grasberg operating entity should re-acquire those rights, leaving Indonesians with 51 per cent of output. But Freeport might well have other ideas. It might, for example, want to recover those rights though the US company rather than the Indonesian entity and thus end up with something just less than 70 per cent of production.

Now while we are on the subject of Rio, we have spent a couple of days pondering what is going on with the miner's robot trains in the Pilbara.
News that one of Rio's AutoHaul trains had made its first unmanned voyage is certainly as encouraging as Rio told us it was in Monday's celebratory announcement.
But the fact is that the train was empty, it ran unpopulated by drivers for only 100kms and it was headed directly away from the complications that have so slowed Rio progress to a fully functioning automated train fleet.
To be clear, the celebrated pilot train was headed to a mine and away from unpredictable humanity. And one of the big problems that have so delayed the arrival of the robot age in the Pilbara is that people do illogical things and the more people there are then greater the chance there is that they will do something that defies the algorithms that drive Rio's trains.
Rio has so far automated half its 200-strong fleet of locos and they have been running around the Pilbara for most of the year but always with drivers aboard.
Monday's news saw us offer Rio some questions. How much has it spent so far on AutoHaul? How far behind schedule is the project? What was the original budget and when will the first fully laden train make the full run from a mine to the point where a driver will routinely takeover (yep, the system will never quite be totally driverless because it needs a human touch to steer the beasts the final 10kms from rail yard to the port-side ore wagon dumpers)?
We got some answers but not a lot of joy.
Rio reiterated the public numbers, which say that AutoHaul is a $US502 million venture. That the project was behind schedule was acknowledged but there was no advice on how far behind it was. And, while we were assured the robot trains would be fully commissioned by 2018, there was no detail offered on just when next year that might happen or, more critically, when the first full train might be directed away from a mine and towards one of Rio's ports.
So, let's try and fill in some of those gaps without Rio's assistance.
A dash through statement's past says that, given it hits the 2018 target, AutoHaul will arrive four years late having exhausted the talents of seriously bright sparks from Perth to the Massachusetts Institute of Technology. Our best guess is that it is already $US500 million over its original budget and there is a long haul left yet between pilot run and full commissioning. Hey, and rest assured Rio, we will correct if you have more informed and accurate numbers at hand.
-------------------------
http://jakartaglobe.id/business/grab-arrives-jayapura/
2) Grab Arrives in Jayapura
By : Tabita Diela | on 2:39 PM October 04, 2017
Jakarta. Grab Indonesia has arrived in Jayapura, Papua, as part of the online ride-hailing service's expansion strategy to offer a safe, convenient and affordable transportation alternative in the archipelago.
"The Grab service in the new cities will continue to leverage on the same safety aspects that we have set, from daily operations to driver training to technology features as safety is paramount to Grab," Grab Indonesia marketing director Mediko Azwar said in a statement on Tuesday (03/10).
The company said it has a system to ensure a standardized riding experience, including "stringent" background checks on driver-partners, 24/7 customer service, an insurance policy and fixed fares.
With the latest addition to its portfolio, Grab's service is now available in 75 cities across Indonesia, from Banda Aceh in the west of the country to Jayapura in the east.
However, the country declined to disclose the size of its fleet in Papua.
Other transport alternatives in Jayapura are taxis, which could cost as much as Rp 450,000 ($33) for a ride from Sentani Airport to downtown Jayapura; special airport buses that cost Rp 50,000; short-route public transportation that costs about Rp 30,000 for the six separate trips required to get from the airport to downtown Jayapura; and motorcycle taxis, costing about Rp 100,000.
According to the Grab smartphone application, a GrabCar trip from Sentani Airport to downtown Jayapura will cost Rp 161,000 during peak hours. The cost might be lower at other times when demand is lower, or when more driver-partners are available.
The Jakarta Globe and Grab are both affiliated with the Lippo Group.
———————————————————
https://en.tempo.co/read/news/2017/10/04/055912019/KontraS-138-Cases-of-Human-Rights-Violation-Conducted-by-TNI
WEDNESDAY, 04 OCTOBER, 2017 | 17:50 WIB
3) KontraS: 138 Cases of Human Rights Violation Conducted by TNI
TEMPO.CO, Jakarta - Commission for Missing Persons and Victims of Violence (KontraS) recorded 138 cases of violence and human rights violation involving the Indonesian Armed Forces (TNI) occurred throughout 2016 to 2017.
Based on the data, KontraS Deputy Coordinator Puri Kencana Putri said that 15 people were dead, 124 injured, 63 were wrongfully detained, and 61 people endured other forms of losses.
Puri said that most of the violations happened during the year were 65 cases of abuse and 38 cases of intimidation. It occurred in North Sumatra, South Sulawesi, and East Java.
Puri also revealed that there has been a drop in the number of violence and human rights violation since September 2016 up to August 2017. However, she presumes that the drop is caused by the victims that are afraid to report their cases to the authorities, or that it took place in rural regions that are far from law enforcement offices.
Read: TNI to Celebrate 72nd Anniversary in Banten
“The current trend is that victims will be handed financial compensation as an attempt to make them silent, even though [these practices] do not satisfy the victims,” said the KontraS Deputy Coordinator.
SAIFULLAH S.
------------------
Posted by AWPA Sydney News at 12:44 PM