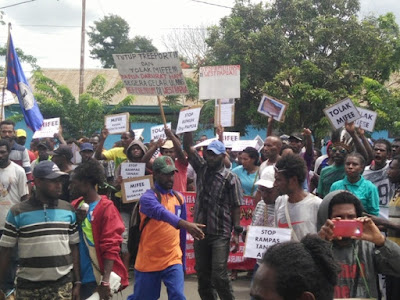 A number of banners were taken during a demonstration at the Merauke DPRD Office – Jubi / Frans L Kobun
Merauke, Jubi – Hundreds of students and youth who are members of the Alliance of Students of the South Papua ‘invaded’ RegionalRepresentative Office (DPRD) of Merauke Regency. The demonstration was to commemorate the World Day of Human Rights (human rights) every December 10.
On Monday (December 11), before heading to the office of the council, hundreds of students held speech in the Brawijaya Circle (Libra). Theythen rallied headed to Merauke parliament.
Various banners were carried contained condemnation to the TNI/Polri who committed acts of persecution against Papuan people, alsothe indigenous land grabbed for investment activities.
At the office yard, alternately a number of students made speech. They demanded the completion of number of human rights cases that occurred in Merauke Regency.
In their statement, there are number of important points read out by Frans Wanima, the rally coordinator. Some of these issues urging the government to restore the sovereignty of the land and forests of the people of South Papua.
Another thing is to close PT Korindo Group, since after 25 years of their operation, did not bring development impact and prosperity for people in the South Papua.
“We also demand to stop the custom of money penalty to the victims which despises law and make the TNI/ Police officers become accustomedand legal to conduct violence and killing in South Papua,” said Frans.
The Student Alliance of South Papua also strongly rejected the efforts of Menkopolhukam, Wiranto, which encouraged the settlement of varioushuman rights cases in the Council of National Harmony (DKN). Because, they said, it will not provide justice to indigenous Papuans who were the victims.
In response to a number of statements, Chairman at Commission A of Merauke Regency House of Representatives, Moses Kaibu, said they would follow up various aspirations in consultation with the chairman of the board.
“I cannot make decision now. Of course, the aspirations set forth in the demands will be submitted to the speaker of Merauke Parliament,Francis Sirfefa, and we will have to discuss for scheduled hearing together,” he said.
On MIFEE Program in Merauke
At the same occasion, MRP member, John Wob, when speaking in front of the rally at Merauke DPRD Office claimed that he oncesubmitted a letter of rejection to the Secretary General of the United Nations related to Merauke Integrated Food and Energy Estate (MIFEE)program in Merauke Regency since 2010.
He was also written to the then President of the Republic of Indonesia (RI), Susilo Bambang Yudhoyono.
He said at the time, the impact of MIFEE program will make Marind people extinct, especially because it increasingly cleared communityforest for investment activities.
“Frankly, there is no positive impact that Marind people can feel with the existence of MIFEE in Merauke,” he said. John Wob promised to continue to speak loudly at the MRP and urged the central government to immediately revoke the MIFEE program, as it would gradually ‘wipe out’ the indigenous Marind-Papuans.
Three districts in South Papua are cautioned to limit investment
Separately, in the same day, three Regency in South Papua, such as Merauke, Boven Digoel and Mappi, are reminded to limit investmentsleading to large-scale forest clearance.
This was conveyed by Director of the Secretariat of Justice and Peace (SKP) Archdiocese of Merauke, Father Anselmus Amo, to Jubi.
At least, he said, the governments of the three regencies should oversee the implementation of investment so as not to create conflictsamong indigenous peoples and environmental degradation on a wide scale.
Father Anselmus also asks government to develop local food that ensures the cultural sustainability of indigenous peoples.
In addition, he said, it is necessary to mapping customary territory of the clan boundaries so there would be certainty and protection of administration of customary territory among the people themselves.
Father Anselmus added that the three regencies need to have firm stance to ensure access to education and health for communities intheir respective villages.
Previously, Pastor Pius Manu also highlighted investments made in Merauke Regency, where most indigenous peoples’ forests are clearedonly for palm oil development.
As more forest is cleared for the sake of investment, the habitats within it are gradually extinct, he said.(tabloidjubi.com/Zely)
----------------------------
http://tabloidjubi.com/eng/18th-congress-papua-baptist-church-ten-thousand-congregations-welcomed-three-papuans-church-leaders/
2) THE 18TH CONGRESS OF PAPUA BAPTIST CHURCH; TEN THOUSAND CONGREGATIONS WELCOMED THREE PAPUANS CHURCH LEADERS
AdminDec 15, 2017 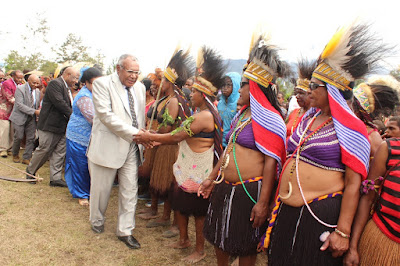 Thousands of congregations attended the opening of Papua Baptist Church – Jubi/IST
Wamena, Jubi – Ten thousands of Papuan church congregations welcomed the Chairman of the Papua Church Synods, Rev. Dr. Socratez Sofyan Yoman, Chairman of the KINGMI Synod, Rev. Dr. Benny Giay, and President of GIDI, Rev. Dorman Wandikbo S.Th, in Wamena , Monday (December 11).
Three Papuan church leaders, known as trio of herds of the oppressed, were present at Wamena for opening of the 18th Congress of the Baptist Churches of Papua that took place in the Yematsi Sinakma Church in Wamena, Monday (11/12/2017).
The congress will be held until December 14.
The three leaders were with the entourage of Central Board of Churches of Papuan Baptist Church, from the lodge of Sinakma Bahtera Church to Yomaima, venue for the opening of the congress.
Thousands of congregations flooded the streets, mostly barefoot, accompanying the ‘three leaders of the people’ to the congress while dancing Papuan traditional mountainous dance.
“Congress participants are from 27 regions and 313 congregations,” said Chairman of the Congress Committee, Denius Kogoya, in his speech.
The 1st Congress, that was December 1966, was attended by only 276 delegates and 78 congregations. But today thousands are present, as quoted from the 18th Congressional handbook.
The President of GIDI, Rev. Dorman, who brings meditation in the opening of the congress, invites church leaders in Papua, in particular the Baptist church, for not too busy organizing the organization but taking care of congregation.
“Churches should not be busy with taking care of organization. We shall take care of the sheep instead. The shepherd takes care of the sheep,” he said in a sermon.
He conveys the point on how the shepherd keeps their sheep, and according to Wandikbo, there are three tasks related to that.
The first task of the shepherd is to feed. The sheep should get spiritual nutrition, because, those who do not get spiritual food will plunge into the path that is away from God and not be afraid of Him.
The second task of the shepherd is keeping the sheep. The shepherd keeps the sheep so the sheep know the voice of the shepherd.
After you feed and nurture, the last shepherd’s job is to keep the sheep, he said. Sheep are kept so as not to become the object of the ferocity of wild animals.
“Keep them out from the wolves come in,” he said, ending it with truly inspiring musings.
Rev. Benny Giay in his speech representing the Papuan church association said the Baptist church has proved its independence. The Baptist Church does not depend on anyone as the Baptist leader’s voice ‘we drink water from our own well’.
“Today you have proved that you can. You’re great, you can do it,” said Giyai, greeted with applause from thousands of congregation.
He also said, the greatness of the Baptist church is actually the greatness of Papuans who are trampled by the ruler. The greatness of Papuans has actually been recognized scientifically through research civilization of Papuans.
“I just got back from Switzerland. Researchers have proved that agricultural civilization begins in Papua, only the world is hiding it,” he said.
Giay also said the study proves that all bananas and sugar cane that exist all over the world come from Papua.
“(Those are all) cultural potential that we can develop, if only we look at education. Therefore, I order, we note the rights of our children to get a good education,” he said.
Chairman of the Papuan Baptist Church Synod in his speech before opening the congress said that the Baptist church is there to protect the people of God.
Therefore, he hopes that the congress will proceed well to evaluate and plan the future programs to run.
Through the congress, he said, whoever will be elected would be invites to support. However, if he is elected, it is clear to him that he will continue the previous tasks.
“I will take care of God’s people. There should be no murder in the name of NKRI on this land,” he said.(tabloidjubi.com/Zely)
-------------------------
https://www.ucanews.com/news/papuans-want-justice-not-infrastructure/81054
3) Papuans want justice, not infrastructure