Thousands of boys and girls remain in shelters after fleeing battles between Indonesian army and independence fighters.

by Febriana Firdaus  6 hours ago 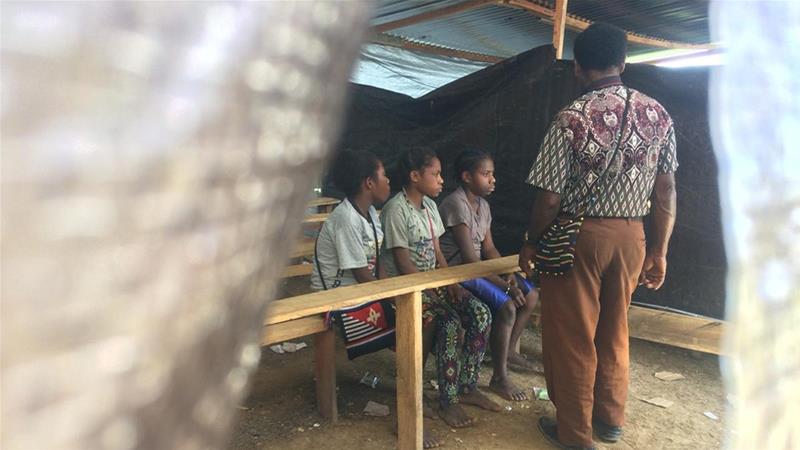 Wamena, Indonesia - Under the pine trees, a nine-year-old girl is sitting on a blue tarpaulin, rubbing her feet.  For the past six months, she's been living in a church-run shelter after escaping the chaos that enveloped her village in Nduga, a remote highland region in the western part of the island of Papua.  "I was just sitting in my house and a 'bomb' dropped from the sky," she said, recalling the bang of what could have been a grenade. "I fled with my family," the young girl continued. "I saw houses were burning. We walked and slept like nomads in the jungle for three weeks."

She is one of an estimated 35,000 civilians, many of them children, forced from their homes in the remote territory's central highlands as the military attempted to root out Papuan independence fighters who attacked a road construction project in December last year, killing at least 17 people.
Major General Sisriadi, a spokesman for Indonesia's armed forces, told Al Jazeera 600 troops had been sent to the area in what he described as a law enforcement operation to support the police.
"As mentioned in our constitution, we must defend our country's land," Sisriadi said. "We have to do anything to defend it."
Indonesia took control of the vast and remote territory bordering Papua New Guinea in 1969 after a controversial referendum in which only 1,026 people were allowed to participate. The vote gave new momentum to the separatist West Papua National Liberation Army, which has continued the struggle for independence ever since.
The region is Indonesia's poorest, despite its wealth of natural resources. Access to the area for foreign journalists remains restricted and even those who get permission to visit can run into trouble with the authorities.
Nduga, a mountainous area that is one of the world's last pristine tropical forests, has been at the centre of much of the instability.
The local communities are indigenous Melanesian people, who are mostly Christian and speak their own languages rather than Bahasa Indonesia. Subsistence farmers, they live on their ancestral lands, growing crops and raising pigs, and supplementing their diet with leaves gathered from the forest and the wild boar that forage among the trees.
An investigation by the local administration into the military's operations in Nduga in December alleged the armed forces had destroyed homes and churches in their bid to flush out the rebels.
Sisriadi accused the independence movement of using local villagers as cover, but none of the displaced people Al Jazeera met said they had been threatened by the rebels.
Theo Hesegem, a human rights activist who helped research the local administration's report, told Al Jazeera that eyewitnesses who preferred not to be named had also told him that bombs had been dropped from helicopters on both December 4 and December 5. The military denies the allegations.

Desperate to escape the fighting, many people trekked through the forest for weeks to find safety surviving on leaves and ferns.
Innah Gwejangge, the head of Nduga Health Department whose team has been providing medical services to the displaced villagers, said many of the children were suffering from illnesses, including respiratory infections and diarrhoea brought on by their ordeal.
"They told me there was no food," Gwejangge said. "They ate anything they could find, such as roots from trees. Some of them were naked. I saw babies wearing nothing, their parents put them inside noken [traditional woven bag] and covered them with leaves," she added.
Hundreds of displaced people have found refuge in the 23 shelters set up by a local Protestant Church in the town of Wamena, the largest settlement in the central highlands.
In one shelter, dozens of children and adults are living in a single house with only one bathroom and kitchen. Most shelters provide a temporary home for between two and 10 families.
"They are still scared," Dolu Bruangge, a volunteer, said of the displaced. "They don't trust outsiders."
Many are desperate to return home so they can get back to their land and what is left of their crops. Church volunteers have given them clothing and other basic necessities.
They have also built a school, staffed with teachers from the local authority. Inside, the students sit on wooden benches beneath a tin roof, surrounded by walls fashioned out of tarpaulin, which billows and rips when the wind picks up.
Jennes Sampouw, the head of Nduga's educational department, said 695 students from 32 districts had now joined the emergency schools. His goal was to make sure the students could take part in the national exams that took place in April.
But the displaced children still find it difficult to get medical services because hospitals can only treat people who are registered locally.
"These children have a right to be protected by the country as mentioned in our children protection law," Retno Listyarti of the Indonesian Child Protection Commission (KPAI), an independent agency, told Al Jazeera, stressing that trauma counselling was also crucial.
Fighting between the military and the separatists continues. On May 13, local media reported an officer had been killed after the rebels attacked an airfield in Nduga.
The continuing unrest means the children are unlikely to return home any time soon. But even when they do go back to their villages, the spectre of violence will continue to haunt them.
"I am afraid the soldiers will come back again," said the nine-year-old girl.
SOURCE: AL JAZEERA NEWS
Posted by AWPA Sydney News at 12:05 AM