Over the last few years Leichhardt and Marrickville councils in Sydney have flown the West Papuan flag on their town halls on 1st December. In NSW, Newcastle has also flown the flag. (Flag raising occurred in other states and apologises to those I don't know about).

This is a good way of raising awareness in local communities . However, this would be up to individuals to lobby their own councils .  It would also need the local council to buy a flag or those lobbying to buy it and loan the flag for the day. (People in unions could also ask their union to fly the flag on their national building). 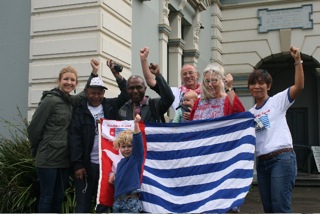 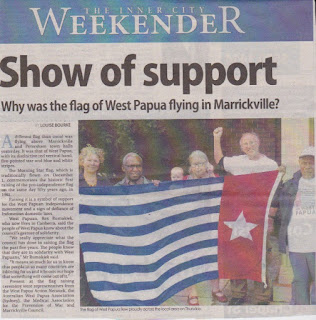 
Even if unsuccessful it can get publicity in the  local media.
Flag motion voted down
http://mosman-daily.whereilive.com.au/news/story/flag-motion-voted-down/

Background
The 1st of December is West Papuan National Day or National flag day .  Fifty one years ago on the 1st of December 1961, in the then Dutch colony of West New Guinea, The West Papuan flag, called the Morning Star was flown for the first time officially beside the Dutch Tricolor.  At that ceremony, as the Morning Star flag was raised, Dutch and Papuan military and police saluted and accompanied by a marine band playing the national anthem, “My Land Papua”. The Dutch were finally about to give the West Papuan people their freedom. However it is one of the great tragedies that at their moment of freedom it was cruelly crushed and West Papua was basically handed over to Indonesia in 1963. After 6 years administration of the province, Indonesia held a sham referendum called the “Act of Free Choice” under UN supervision.  Only 1025 handpicked voters, one representative for approximately every 700 West Papuans were allowed vote, and under coercion, voted to "remain with Indonesia. The Papuans call this the  “act of no choice”.

Flag raising
The West Papuan people raise their flag as an act of celebration  but also of protest against the injustices they suffer under Indonesian rule. One of the most famous West Papuan political prisoners is Filep Karma . On the 1st December 2004, he was arrested for being part of a  rally where the  Morning Star flag was raised.  In May 2005, a court sentenced Filep Karma to 15 years jail on charges of treason against the state. Amnesty International considers  Filep Karma to be a prisoner of conscience who has been detained solely for the peaceful exercise of  his right to freedom of expression.

Action
Write to the General Manger of your local council asking if council would fly the flag, give reasons for your request, explaining the human rights situation in West Papua, examples of West Papuans jailed for raising the flag (Filep Karm recognised by Amnesty International as a prisoner of conscience). Make an appointment with your local councilors to discuss the issue.