WPNCL DELEGATION WAS RECEIVED BY PRIME MINISTER OF FIJI AND CHAIRMAN OF MSG
Officials from West Papua National Coalition for Liberation met with Prime Minister Vereqe Banimarama on 27 March 2013. Earlier, on 25th March the delegation met with Minister for Foreign Affairs & International Cooperation, Ratu Inoke Kubuabola and his Staff. An Official from MSG Secretariat was also in attendance.

The delegation is consisted of Vice Chairman, Dr.Otto Ondawame, Secretary General, Mr. Rex Rumakiek and Mr. Barak T. Sope Mautamate former Prime Minister and adviser to WPNCL.
They were in Fiji lobbying for full membership status at the Melanesian Spearhead Group (MSG) which is currently chaired by the Fijian Prime Minister.
They will be visiting the other members of MSG to also seek their support.
WPNCL lodged its application for full membership on 28 January 2013.

In welcoming the delegation, Prime Minister Banimarama thanked the visiting delegation for taking this inaugural visit to Fiji to now formally request Fiji’s support towards the cause of the West Papuans.
“Given that the application has been received by the MSG Leaders, we will ensure that it will go through the proper process and that it is discussed at the 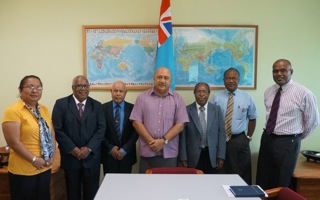 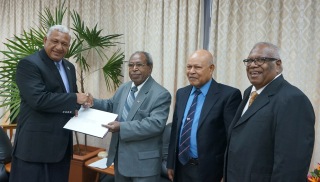 next MSG Senior Officials Meeting in June before it is presented to the Leaders for their decision through the Foreign Affairs meeting,” said Prime Minister Banimarama.

On behalf of WPNCL, Vice Chairman Dr. Otto Ondawame thanked the Prime Minister for taking the time to meet with the delegation and hear from them directly, their reasons for submitting the application. They also commended him for leading the people of Fiji well during these challenging times and also his overall leadership of the MSG over the past two years which has seen MSG gain more prominence in regional affairs. They noted that under Fiji’s Chairmanship, the MSG has advanced issues relating to the process for decolonization in New Caledonia, trade, economic and cultural issues which have further strengthened the grouping and expressed their appreciation to the Prime Minister for acknowledging their application to be a part of this young and dynamic organization.

Dr. Otto Ondawame also thanked the Minister of Foreign Affairs & International Cooperation, Ratu Inoke Kubuabola for the understanding established between his Ministry and WPNCL during discussions held in his Ministerial Office. The delegation acknowledged Minister Kubuabola for the protocol arrangements his Ministry had arranged for the delegation, including a frank Melanesian way discussion with the other Diplomats of the MSG.

WPNCL is the umbrella organization of the West Papuan independence movement based in the country with its International Secretariat in Port Vila, Vanuatu. The objective of WPNCL is to organize and coordinate programs and activities to restore or reclaim Papuan people’s right of self-­‐determination and independence.
The delegation also congratulated the Prime Minister on his assumption of the Chairmanship of the G77 and wished him well in his role, a first for the region.
Prime Minister Banimarama expressed his appreciation to the WPNCL for taking the time to visit Fiji to meet with him and the Minister of Foreign Affairs and International Cooperation, Ratu Inoke Kubuabola and informed them that he will maintain close contact with his colleagues on the matter and will inform them through the MSG Secretariat of the leaders decision.