http://tabloidjubi.com/2013/11/30/gubernur-ndc-di-png-terima-john-rumbiak-award-itulah-posisi-png/
4) NCD GOVERNOR JOHN IN PNG Rumbiak AWARD RECEIVED , THAT'S POSITION PNG
Author : Victor Mambor on November 30, 2013 at 01:04:03 WP
Editor : -
tabloidjubi.com believe that the readers of this site are people who are intelligent and educated . Let's use polite words in commenting on this site 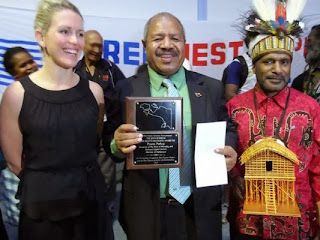 Jayapura , 30/11 ( Jubi ) - Hon . Powes Parkop , Members and the Governor of the National Capital District ( NCD ) Award awarded " to John Rumbiak HUMAN RIGHTS AWARD " in the main hall of the University of Papua New Guinea ( UPNG ) , Nov. 27 . The award was presented by Papua These indicate the name of the people and nation of Papua for a clump Melanesian brothers .

Powes Parkop , since the 1980s when he was a student , had shown sympathy for the struggle of the people of Papua through MELSOL ( Melanesian Solidarity ) . Powes is the sixth person to receive the award this human rights defenders .

Governor NDC has long been known to be very active helping West Papuans displaced in Port Moresby . He was also active in helping the freedom fighters of Papua in PNG . Slide - Samarai campaign that has just started can be done because the contribution Powes Parkop very large .
Fred Mambrasar , campaign spokesman Sorong - Samarai said Powes during the actual contribution describes the position of PNG in West Papua 's struggle for independence .
" Powes a governor of the territory that became the capital of PNG . His contributions can not be separated from its status as a governor . That is the position of PNG . " Said Fred Mambrasar the Jubi ( 29/11 ) .

Meanwhile , Sorong - Samarai campaign continues to this day , Saturday ( 30/11 ) . Thursday ( 28/11 ) campaign filled by Jennifer Robinson , Director of Legal Advocacy , also a member of INTERNATIONAL Lawyers for WEST PAPUA ( ILWP ) that conveys the legal assessment of the Papuan People's Right to self-determination ( self - determination ) based on international hukum2 .
" I convey legal assessment of the Papuan People's Rights raped and violated by the Government of the Republic of Indonesia in its efforts to enter into the state of West Papua unity . " Said Jennifer .

Submission of this legal study took place in a social space National Parlement of Papua New Guinea , dated 28 November 2013 and was attended by activists from Australia Papua , West Papua , Papua New Guinea and the UK .

Jennifer Robinson After law studies , the activity followed by two members of the National Parliament of Papua New Guinea are also members of the International Parlementarian for West Papua ( IPWP ) , Hon . Boka Kondra , Minister for Tourism & Culture , and Hon . Justin Tharchenko , Minister for Sport . Both members of this Parliament expressed their solidarity speeches in preparation for the opening of the Free West Papua Campaign Office Port Moresby , PNG , and the Morning Star Flag Day commemoration December 1, 2013 in Port Moresby . ( Jubi / Victor Mambor ) 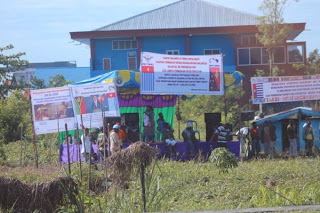 Thanksgiving worship activities to support the establishment of a representative office OPM held at the tomb figures Papua Movement (OPM ) Kelly Kwalik in Timika , dated 26 November 2013 ago . Where , as many as 33 activists were arrested and the event KNPB disbanded because it had no permission from the police , then released . ( Jubi / Eveerth )

Timika , 29/11 ( Jubi ) - Chairman of the Justice and Peace Commission of the Diocese of Timika , Fr . Saul Paulo Wanimbo , PR . , Said security forces pick the Standard Operating Procedure ( SOP ) in the face of mass action , but sometimes are not implemented as an SOP which has diintuksikan in the applicable legislation . These issues often result in clashes between communities and authorities . So officials need to act in a professional manner .

" Freedom of expression and the expression is already set in the constitution of our country so that every citizen has the right to convey what the aspirations , " said Fr . Saul Paulo Wanimbo , to tablodijubi.com , in Timika on Friday ( 29/11 ) .

He said other democratic space seems to have been closed by the state so that people feel a peaceful demonstration through the main street to express their opinions . But this is precisely the hindrance of the security forces . The reason is always used apparatus is the protesters did not have permission and should be disbanded .

" One example is the case on 26 November 2013 and in the community to worship at the tomb of the late Kelly Kwalik in Jalan Budi Utomo , Timika . Mass direct action when dissolved , when the action was noticed by authorities a day earlier . Why from last night was not directly performed preventive action so that it does not happen ? apparatus precisely why wait when a new action performed dissolution occurs , it's a big question mark ? "said Saul .

Saul suggests , that the future security forces to put forward ways of humanitarian action in the face of society . Therefore , violence is not the solution of a problem-solving Papua , but the approach and give space for people to express their aspiration will become a meeting point so that the issue can be resolved .

" We hope that the security forces in the face masyaralat prefers persuasion to resolve a problem , " pleaded Saul .

Meanwhile , as reported by the media , ahead of the security related December 1, 2013 , the Papua police chief , Inspector General of Police Tito Karnavian said it has collected all the existing Police under the command of Papua Police to discuss the possibility of a security breach . " The entire police chief we collect and we discussed one -on-one . We mapped several areas prone . First we prevent violence from happening . The first area of Puncak Jaya , Lanny Jaya , Paniai , Timika derah Coffee time , Mamberamo Kingdom , Sarmi and Serui , " the police chief said on Friday ( 29/11 ) .

According to him , there are two security threats . The violence , both mobolisasi mass and flag raising .
"I ordered to build dialogue because shooting will never strengthen the struggle . Moreover, if the target of civil society . Will surely be condemned to overseas. So it must be fought with democratic means to get public sympathy . Local, national and the international . The struggle will be successful if there is public sympathy , " said Papua police chief . ( Jubi / Eveerth )

The West Papua Advocacy Team calls on the U.S. Government to vigorously condemn the ongoing security force campaign of violence and intimidation in West Papua.  WPAT also calls on the U.S. Government specifically to urge the Indonesian government to act to restrain its security forces in dealing with peaceful December 1 demonstrations in accordance with international guarantees of freedom of speech and assembly to which the Indonesian government is obligated.  WPAT notes that the provocative police conduct may be intended to create an atmosphere of insecurity so as to forestall the expected visit of Melanesian foreign ministers to examine first hand the plight of Papuans.
Background
Indonesian authorities in West Papua assaulted peaceful Papuan demonstrators on November 26, reportedly killing one and inflicting four gunshot wounds. (see

The Jayapura shooting victim, KNPB activist Matthius Tengget, died of his wounds in custody.  However, his body was subsequently retrieved after it was dumped into a lake, allegedly by those members of the Brimob paramilitary police units who shot him.

According to a statement from KNPB General Chairman Victor Yeimo, currently in Abepura prison, "KNPB and family members of the victims are also looking for four other KNPB members that are missing: their whereabouts are unknown or their bodies have not yet been found."  http://knpbnews.com/?p=3235#more-3235

According to WPAT source and media reports, the police in Jayapura opened fire November 26  on an estimated 500 Papuans who were peacefully celebrating the opening of an office of the West Papua National Copmmittee (KNPB) in Papua New Guinea. West Papua Media reports 15 Papuans are in serious condition in hospitals with various wounds as a result of the police operation in Jayapura. Peaceful demonstrations organized by the KPNB took place in many parts of West Papua at the end of November. Most were met with police violence. Police in Timika arrested 31 demonstrators and three in Sorong. A very large demonstration in Wamena passed peacefully, apparently because the demonstrators vastly outnumbered the police who had gathered to block the demonstration. The police violence November 26 followed police arrests of 16 Papuans who were peacefully handing out leaflets on November 25.  In the wake of the new security force violence many Papuans, according to West Papua Media have fled their home and sought refuge in the forests. Reports to WPAT from West Papua also indicate that in recent days journalists have suffered intimidation by security forces.

International Lawyer Jennifer Robinson, Convener of the International Lawyers for West Papua and currently meeting in PNG, told West Papua Mediathat "This use of excessive force against KNPB members is in breach of international law and Indonesia's own police regulations on the use of force"."This latest incident falls within a repeated pattern of the use of excessive and lethal force by Indonesian police against peaceful activists in West Papua which is indicative of a broader state policy. Continued impunity for the police involved is unacceptable and the failure to punish gives rise to command and state responsibility," Robinson said.  http://westpapuamedia.info/2013/11/29/shootings-killings-beatings-arrests-as-hundreds-flee-to-jungle-after-indon-police-open-fire-on-peaceful-knpb-demo/

For its part Amnesty International has condemned the police violence and expressed concern about ill treatment of those placed in custody in connection with the police action. HTTP://WWW.AMNESTY.ORG/EN/LIBRARY/ASSET/ASA21/039/2013/EN/50A346F7-C5BE-4313-ACCD-9E606B74AEDE/ASA210392013EN.HTML
"Amnesty International is concerned about allegations that police ill-treated protesters involved in a pro-independence protest in Papua as well as intimidated journalists who were covering it. On 26 November, police arrested at least 28 political activists including three women who participated in a pro-independence protest in Waena, Jayapura organized by the West Papua National Committee (Komite Nasional Papua Barat, KNPB). According to a human rights lawyer who saw them in detention at the Jayapura City police station, there were indications that they had been beaten after they were arrested. Some of the detainees had bruises or swelling on their mouth, eyes, forehead and body. At least 12 people are still in police custody."
The growing violence in West Papua appears to have been orchestrated to coincide with the late November visit there of the new National Police Commander Sutarman.  Sutarman has been explicit in his threats to Papuan activists telling State media outlet Antara "We will take firm action against groups or individuals wanting to separate Papua from Indonesia because Papua is part of Indonesia."

Indonesian security authority attempts to intimidate Papuans have focused significantly on the KNPB. Tabloid Jubi reported November 26 that Papua Deputy Police Chief Waterpauw, on the eve of the police crackown in West Papua, denied KNPB the right to freedom of expression, permanently. "I made it clear to the group West Papua National Committee ( KNPB ), immediately stop the steps that are likely to violence . Whatever the form of their intention and desire to perform activities in public hearings, (it) will never be given permission or recommendation to implement it , because we know the purpose of the organisation and their desire is clear, (they) want to form a state , split off and so on. "

The wave of police violence comes on the eve of what are expected to be commemorations of "Flag Day" across West Papua as Papuans celebrate by raising the Morning Star (Bintang Kehora) flag for the first time, December 1 1961. Sutarman warned that “The Bintang Kejora flag raising ceremony on Dec. 1 is forbidden, and those involved will be dealt with seriously."
http://www.thejakartapost.com/news/2013/11/28/police-chief-pledges-crackdown-rioters.html
---------------------------------------------------------------------------
7) West Papua media report with photos
Report/ photos of crackdown on rallies at
Shootings, killings, beatings, arrests as Hundreds flee to jungle after Indon Police open fire on peaceful KNPB demo
http://westpapuamedia.info/2013/11/29/shootings-killings-beatings-arrests-as-hundreds-flee-to-jungle-after-indon-police-open-fire-on-peaceful-knpb-demo/
Posted by AWPA Sydney News at 12:51 PM