Lest we forget the day of broken promises, the New York Agreememt

Lest we forget the day of broken promises, the New York Agreement

55 years ago on the 15 August in 1962 an agreement was signed between the Republic of Indonesia and the Kingdom of the Netherlands concerning West New Guinea.

The Agreement did contain certain guarantees for the population of the territory, including detailed provisions regarding the exercise of the right of self-determination .

Although a so called act of free choice did take place
In 1969, Indonesia chose only 1025 electors (one representative for approximately every 700 Papuans) to vote in the UN sanctioned election. Under coercion the electors voted to integrate with Indonesia. The West Papuan people call this , the act, of no free choice. It should be remembered that
Australia was also involved in the betrayal.

However, the international community is finally beginning to realise that West Papua is back on the international agenda particularly in the Pacific region. Pacific leaders have raised the issue of human rights abuses in West Papua a number of times at the UN and it has been reported that it will be on the agenda again at the upcoming PIF meeting in Apia in September.

Joe Collins of AWPA said, "it is very encouraging that West Papua is back on the PIF agenda and we hope that the PIF leaders continue to press Jakarta to allow a PIF fact finding mission to visit West Papua".

The Indonesian Embassy in NZ has disputed claims by NGOs about the number of arrests of West Papuans in recent incidents and also by the Vanuatu Government who raised concerns about the situation at the UN.

Collins of AWPA said " the Indonesian President said West Papua is now open and the authorities are saying there are no human rights abuses, so why don't they allow a PIF fact finding mission to the territory?
Ends. 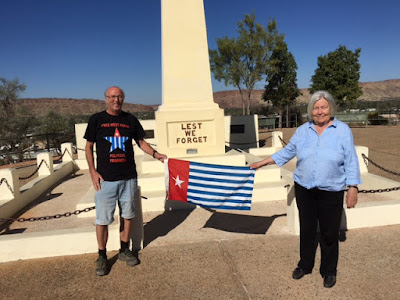 Posted by AWPA Sydney News at 3:33 AM