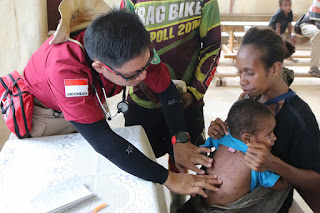 When duty calls: Medical workers from the Asiki village clinic in Papua travel to neighboring Kapoho village to administer healthcare services in a mobile clinic. (./.)

The prolonged violence and inequality in Indonesia's easternmost provinces are taking a particularly hard toll on women, increasing the risk of them becoming victims of domestic violence and hampering their empowerment, Papuan rights activists say.

She cited the ongoing military operation against armed rebels in Nduga regency, Papua, which has resulted in the displacement of thousands of civilians in the region, as an example.

While sheltering refugees from the conflict-ridden regency, Esther said many sick and injured women were afraid to go to the hospital as authorities would put Nduga residents under strict supervision.

Her volunteer group also found that women and children made up the highest number of deaths among refugees.

Aside from the violence, Esther added that women of Papua were also subjected to systemic oppression through several gender-biased policies, such as the special autonomy funds that were allocated for women.

To support development in the region, the Papua and West Papua provinces were set to receive Rp 5.86 trillion (US$403.508 million) and Rp 2.51 trillion, respectively, this year from the central government. However, Papua only allocated 6 percent of the funds for women, which would also be shared with indigenous people and religious institutions, while West Papua had no specific regulation for budget-channeling to women's issues.

Additionally, Esther said women were marginalized culturally in many cases, such as in determining areas of customary land as women were rarely involved in the matter. Women were also often forced out of their land by land concessions and investments, leaving them economically vulnerable.

She added that in majority Christian Papua and West Papua, “misinterpretations” of Christian teachings, such as putting men in leadership positions, often placed women as "second-class citizens"."Generally, women in Papua today experience layers of violence.”

Despite the concerns, Elvira Rukambu, a social and political science lecturer from the Cendrawasih University in Jayapura, Papua, said the current discourse of racial issues affecting Papuans had left her hopeful.

She noted the favorable reception of the Papua Lives Matter movement, inspired by the global antiracism movement Black Lives Matter, which has spurred many discussions on racism and humanitarian issues, most of them organized by people outside of Papua.

She compared it to the "shallow" discourse about Papuan issues in previous years, when they were usually limited to whether people support separatism or not and did not reflect the complexity of the regions that had experienced decades of violence and discrimination.

"We must maintain this momentum of discussing Papua with all its complexity, especially by providing a red carpet for women's issues as well," Elvira said.

Posted by AWPA Sydney News at 3:09 AM