2) The ULMWP’position and the Melanesian Spearhead Group

Posted about 6 hours ago

Video footage
West Papua is the collective name used by pro-independence supporters to refer to two Indonesian provinces located in the western half of New Guinea island.
The mountainous region, comprising the provinces of Papua and West Papua, is home to more than 250 Melanesian ethnic groups.
The long-running separatist movement in West Papua remains a sensitive issue for Indonesia, with pro-independence rebels continuing to resist Jakarta's authority.
Here are five things you should know about the region.

1. What is West Papua's history?

The former Dutch colony, previously called Irian Jaya, had been preparing for independence before Indonesia asserted its claim in 1962.

PHOTO: Students demand the freedom of West Papua province in a rally in East Java province in 2013. (AFP: Juni Kriswanto)
The West Papua region officially became part of Indonesia after the Act of Free Choice in 1969, a referendum that was overseen by the United Nations.
Only a fraction of the population — 1,026 Papuans — were selected to vote on whether or not to remain within the Republic of Indonesia.
Since the decision was made to join Indonesia, a near-constant friction has continued with reports of violent crackdowns and human rights abuses committed by Indonesian authorities against pro-independence supporters.
West Papua is one of the poorest provinces of Indonesia despite being one of the most mineral-rich regions in the world.
The poverty rate in West Papua is almost three times higher than Indonesia's national average, according to the Australian Institute of International Affairs.

2. Why have I been hearing about it recently? 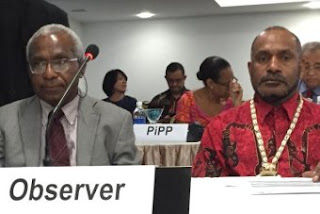 In June, a coalition of West Papuan organisations was made an observer of the Melanesian Spearhead Group (MSG), a regional bloc that includes Fiji, Vanuatu, Papua New Guinea, and Solomon Islands.
The United Liberation Movement for West Papua (ULMWP) had applied for full membership, hoping it would give their movement greater political recognition.
ULMWP members who attended the summit in Honiara welcomed the MSG decision, describing it as a historic step for West Papua.
Paula Makabory is from the West Papua National Coalition of Liberation, one of the resistance organisations working alongside the ULMWP.
She told the ABC that West Papuans will continue to seek MSG membership because "we are part of the Melanesian family".
"We are not Asian. Geographically, culturally - we are Melanesian," Ms Makabory said.
"For me being in the MSG, even though it's as an observer, that is an opportunity ... to be there and also talk to Indonesia because we have been clinging to Indonesia for peaceful negotiations."

The leaders of the MSG voted to make Indonesia an associate member, paving the way for stronger cooperation between Jakarta and Melanesian countries.
Fijian prime minister Frank Bainimarama said Indonesia's sovereignty over West Papua "cannot be questioned".
"The province is an integral part of Indonesia, so when we deal with West Papua and its people, MSG has no choice but to deal with Indonesia, and in a positive and constructive manner," he said.
Sade Bimantara, spokesperson for the Indonesian embassy in Canberra, said there were about 11 million Indonesians of Melanesian descent concentrated in five provinces in the eastern part of Indonesia.
"Indonesia's membership in the MSG will further open and strengthen connections between peoples in Indonesia and their Melanesian brothers in the South Pacific," he said.
Since 1998, Mr Bimantara said genuine efforts have been made by the Indonesia government to improve human rights situation across Indonesia, particularly in Papua.
Human Rights Watch has said the conduct of Indonesian security forces in Papua has bred a deepening antipathy between native Papuans and Indonesian authorities.
The group takes no position on the right to self-determination, however, opposes imprisonment of people who peacefully express support for self-determination.

Observers in Jakarta say Indonesian president Joko Widodo, unlike his predecessors, may represent a change in policy towards West Papua.
"The Jokowi administration has been trying to improve the human rights, economic, and security conditions in Papua," said Dr Ikrar Nusa Bhakti, a research professor at the Research Centre for Politics.
Mr Jokowi has visited Papua four times and become the first Indonesian president (to) spend his time and attentions on Papua."
During his visit in May, Mr Widodo said he had granted pardons to five Papuan prisoners as part of the "government sincere efforts to rid the stigma of Papua as a conflict region".
He also announced that foreign media restrictions had been lifted in the region.
On the security situation, Indonesian embassy spokesman Sade Bimantara said "regrettably challenges remain".
"Violence is committed both against civilians, armed separatists individuals and groups as well as against security forces," he said.
"When laws are broken, the police act to control and if needed, to disperse the crowd, consistent with the police's strict standard procedure for crowd control.
"Allegations of abuse by security forces are taken seriously by the government of Indonesia."

5. What next for West Papua?

Human rights campaigner Paula Makabory said she is doubtful the Indonesian government can keep its promises to resolve West Papua's issues.
"It was not a surprise for me to see Jokowi ... promising all these things, just like former presidents Susilo Bambang Yudhoyono and others," she said.
Ms Makabory said her group would continue to work towards self-determination for West Papua.
"To get independence - that is the goal," she said.
"We need a proper referendum to let people choose, its not my decision.
"I would love to rule my own country, my own land, my ancestral land; it needs to be kept in its beauty - not to be exploited - for my future generations."
The Indonesian embassy's spokesman said a new vote was unlikely to happen.
"No referendum is being planned and will be planned on West Papua," Mr Bimantara said.
"Rooted in history, language, geography and the same plight as former colony of three nations, the West Papuans like the peoples from other regions of Indonesia have always considered themselves as part of Indonesia.
"In 1969 the governments of Indonesia, the Netherlands, the United Nations and its members and most importantly the people of West Papua ... reaffirmed that West Papua is an irrevocable part of Indonesia."
Australia says it recognises Indonesia's sovereignty over the Papua provinces, as outlined by the 2006 Lombok Treaty between Australia and Indonesia.
Indonesian sovereignty of the area is widely recognised by the international community.
——————————————————————-
2) The ULMWP’position and the Melanesian Spearhead Group
Comment by the Executive-Director of LP3BH   A recent statement made by the Prime Minister of Fiji, Frank Bainimarama, who said that the fact that the Melanesian SpearheadGroup/MSG. made it possible for both the United Liberation Movement for West Papua (ULMWP) and Indonesia to attend the recent meeting ofthe MSG means that the MSG is in a position to facilitate the solution of the problems being faced by the Melanesian people living in WestPapua and elsewhere Indonesia.  This statement shows that the leaders of the MSG are well aware of the social and political problems and the cultural problems that haveconfronted the Melanesian people who inhabit the Cenderawasih Land for many years.  This means that the opportunity for including on the agenda the problems that are of crucial importance in resolving the basic humanrights problems that have confronted the people in the Land of Papua for that past fifty years is more likely now than ever before, and isbeing widely discussed at almost every meeting as well as between the leaders representing the various countries  within  the MSG.   In this connection, speaking as the recipient of the John Humphrey Freedom Award in 2005, Canada. I urge all human rights organisationsin the Land of Papua and throughout the world to make a positive contribution by providing all the information that is available aboutthe violations of human rights that have been occurring for the past fifty years. Furthermore, I call on the MSG, via the intermediary ofits Secretariat General, to become a key pillar for the resolution of these problems, from now on.  Of course it goes without saying that resolving these human rights violations should be done through legitimate channels by using thevarious national and international institutions, in particular with the support of the United Nations  High Commission on Human Rights, based
in Geneva, Switzerland.Peace!Yan Christian Warinussy, Executive Director of the LP3BH Manokwari - the Institute for Research and Analyzing and Development for Legal AidTranslated by Carmel Budiardjo
——————————————————————
http://tabloidjubi.com/en/2015/07/14/lake-sentani-included-on-lipi-list-for-lake-management-study/

July 14, 2015 tabloidjubi.com
Sentani, Jubi – Lake Sentani has been included on the list of 15 lakes that are being considered to be subjects of a study on lake managements, but until now there has been no action taken for its development.
Jayapura regency government conducted a comparative study on management of lakes by visiting one of the largest lakes in Japan. After the trip Jayapura regent advised to coordinate with the Indonesian Institute of Sciences (LIPI) regarding the future management of Sentani lake.“We have been coordinating with LIPI, because its experts graduated from Japan. LIPI also has a major role to Lake Sentani, therefore we have asked LIPI to conduct a scientific study on the future development of Sentani lake,” Jayapura regent Matthew Awoitau said on last week.
He said, the results of research and scientific studies by the LIPI, will be made a great proposal that will be given to the Government of Japan to cooperate in the development of Sentani lake.“Later the results would be outlined in a proposal made large then submitted to the Japanese government for how the results of a study conducted by LIPI for making Sentani lake development better,” he said.
He then added we should give our children a local content how to maintain the environmental conditions of Sentani lake. By learning around Sentani lake, of course, will impact greatly to the development of Sentani lake.“When we were in Japan, the Japan government suggested that the management of the lake must start from kids from elementary level in order to gain insight and knowledge. They will be more open when looking at the conditions and what is going on at Sentani lake, so this will be a great movement for joint – both maintain and develop what is above and even in Sentani lake, ” Awoitau said.
Separately Jerry Okoka one of the residents was happy if there are efforts made for the development of Lake Sentani.“So far we only know to stay and live on the lake alone, and this practice has been handed down to us who inhabit the shores of Lake Sentani. Such information we have heard but no changes have been done,” he added. (Engel Wally/ Tina)
—————————————————
http://tabloidjubi.com/en/2015/07/14/export-levy-of-freeport-indonesia-down-5/
4) Export Levy of Freeport Indonesia Down 5%
July 14, 2015 tabloidjubi.com
Jakarta, Jubi – Levies from exports of concentrate by PT Freeport Indonesia will drop to 5 percent following the progress of the construction of mineral processing and refining facilities, or a smelter, which has reached 13.46%.
Currently PT. Freeport pays 7.5 percent in export duty to the government.
A Finance Ministry regulation on export duties and tariff stipulates an export of 7.5 percent applies to construction or investment funds absorption for a smelter at between 0 to 7.5 percent.
Once the project is 7.5 to 30 percent completed, the export tax will be reduced to 5 percent. While the progress of the construction of more than 30 percent is eligible for zero percent tax duty.
Head of public communication of Energy and Mineral Resources Ministry (ESDM), Dadan Kusdiana said progress is being studied by smelter Freeport technical team. He could not confirm whether the duties paid Freeport fell to 5 percent due to the progress of the construction of smelter in the category of 7.5% -30%. ” Basically it should be according to the rules. Later we’ll see what the results of the evaluation of technical team, ” Dadan said last week.
Freeport will build a smelter in Gresik, East Java, with a capacity of raw materials reached 2 million tons of copper concentrate. The investment is US $ 2.3 billion.(*/Tina)
————————————————
Posted by AWPA Sydney News at 1:36 PM