3) KABIANGGAMA PEOPLE THREATENED WITH STARVATION
4) LEGISLATOR: 10 PERCENT OF FREEPORT SHARES TO PAPUA IS A ‘POLITICAL BRIBE’ 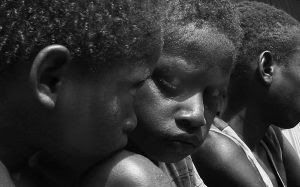 Jayapura, Jubi – Natan Pahabol, Deputy Chairman of Commission I, Papua House of Representatives, on Education and Health put questioned on 15 percent from 80 percent of the Papua Otsus (Special Autonomy) fund granted by Papua Provincial Government to districts/regency government.
This was said by the Gerindra Party politician in response to the epidemic of measles and malnutrition in Asmat regency causing at least 24 children died, in the last four months.
“If this condition keep happening in regencies or districts, we need to question the 80 percent Otsus fund given by the Papua Provincial Government (to the regions),” said Natan on Sunday
(January 14).

According to him, the flow of Otsus funds for health to the districts and municipalities in Papua should be questioned, especially if the condition of public health has been slumped.
Quoted from rmol.co, the number of children died in Asmat due to measles and malnutrition is likely to increase because the district government still collecting the data.
Head of Public Health Service of Asmat District Health Office, Steven Langi, said dozens of children now treated at Agats Hospital suffered from measles and malnutrition and other diseases, such as tuberculosis, pneumonia and malaria.
“There are three children affected by measles and malnutrition return home from the hospital,” said Steven Langi.
According to him, five districts in the interior of Asmat are stroke by measles and malnutrition, which are Swator, Fayit, Pulau Tiga, Jetsy, and Siret.
Asmat regency has sent four teams to five districts since Tuesday (January 9) to provide medication and food, and collected data of victims. (tabloidjubi.com)

Reporter: antara  6 hours ago
Jakarta (ANTARA News) - The Indonesian National Defense Forces (TNI) has deployed 53 medical personnel to handle the measles epidemic in Asmat District of Papua Province."The personnel deployed under the TNI Task Force for the extraordinary event have departed aboard a Hercules A-1326 helicopter from the Halim Perdanakusuma Airbase to Papua," Head of the TNI Information Center Mayor General M. Sabrar Fadhilah stated in a press release received here on Monday.Fadhilah noted that President Joko Widodo had urged TNI Commander Marshall Hadi Tjahjanto to treat people suffering from measles in Asmat District.The TNI commander has established a health task force to assist the Health Ministry to fight the measles outbreak.The team comprises medical personnel from the TNI and Army health center as well as the Navy and Air Force health service.The joint operation is being carried out to offer humanitarian assistance in the health sector."The task force will strengthen the medical team of the Cendrawasih Regional Military Command centered in Timika City," Fadhilah stated.The team comprises medical specialists, paramedic officers, and medicine specialists. The team has also brought along medical tools and vaccines for diphtheria and measles.According to Fadhilah, the TNI has also brought along 11,100 instant food packages to be distributed to the people of Asmat. He noted that the total count of those exposed to measles had reached 467 children.Meanwhile, 487 children had been vaccinated, and 1,052 others had received medical treatment. Reported by Saiful Hakim(Uu.B019/INE)EDITED BY INE/H-YH

Jayapura, Jubi – Legislator of Papua, Laurenzus Kadepa, considered that the granting of 10 percent of PT Freeport Indonesia’s shares to Papua Province Government and Mimika Regency Government from 51 percent of the Government of Indonesia’s shares divestment is similar to the case of Special Autonomy (Otsus).
He said that in 2001 the Government of Indonesia had granted the Special Autonomy Law and the Special Autonomy Fund to Papuans who were insisted to be politically independent.
“Now the Government of Indonesia gives 10 percent of Freeport shares to Papua Province and Mimika regency,” he said to Jubi, Saturday (January 13).
According to him, the issues of Papua human rights violations which are now increasingly go global had resulted fruitful international response, that some countries are now continuing to voice the issue of Papuan human rights at various world forums.
“The response of various countries related to human rights situation in Papua, may make Indonesian Government forced to think: how to tame the human rights issue. And one of them, I think, with the giving out shares of Freeport,” he said.
However, he continue, not all Papuans responded negatively to the shares. There are among those who support and look at it as a positive step.
“Papuan people is divided in responding this issue, because Freeport is the beginning of calamity and suffering experienced by indigenous Papuans,” he said.
Previously the central government, the Papua Provincial Government, the Mimika Regency, and PT Indonesia Asahan Aluminum (Inalum) agreed on a 10 percent divestment agreement of PT Freeport Indonesia in Jakarta on Friday (January 12).(tabloidjubi.com)
-----------------------

Straits Times reported that Indonesian regional and central government officials signed an agreement with state holding company PT Inalum that lays the foundation for transfer of Freeport-McMoRan Inc's giant Grasberg copper mine to local control.Indonesia and Papua have long pushed for greater control over Grasberg and the new ownership structure may ease tensions over spoils from the world's second-biggest copper mine, a focal point for local separatists.Indonesia and Freeport agreed in principle in August to set up Freeport's rights to Grasberg according to a new mine licence that replaces an existing contract of work.The American miner also said it would divest up to 51 % of its local unit to"Indonesia interests".Under the agreement signed on Friday, the Papua provincial government and Mimika regency will jointly own rights to a 10 % share in PT Freeport Indonesia once they have been divested, Finance Minister Sri Mulyani Indrawati said at a press briefing.Ms Indrawati said that "This portion of share ownership rights is for the interests for the indigenous land owners and members of the community facing permanent impacts (from the mine)."Ms Indrawati said that "The government hopes to improve the performance of PTFI and give maximum benefits to the Papuan and Indonesian people."The agreement allows the Indonesian parties to act as a consortium in the acquisition, funding for which will be provided by Inalum and will not be taken from the central or regional government budgets, Ms Indrawati said.A Jakarta-based spokesman for Freeport Indonesia declined to comment on the matter.Inalum, which holds ownership of all state-owned mining companies, has been nominated to acquire an additional 41.64 % in Freeport Indonesia, which would take Indonesia's share of PTFI to 51 %, up from 9.36 % now.The 10 % to be held by Papua and Mimika will be part of this Inalum holding, Inalum chief executive Budi Gunadi Sadikin said.Disagreement on the valuation of Grasberg may hold up a deal, analysts have said.Coal and minerals director-general Bambang Gatot said on Thursday that Indonesia is targeting to complete contract talks with Freeport by June.Ms Indrawati said"The process to obtain 51 % including the Rio Tinto participating interest that will be converted to a shareholding is still being discussed and negotiated with related parties."Ms Indrawati was referring to a joint venture Freeport formed with Rio Tinto in 1996.Under that venture, Rio has a 40 % interest in PTFI's Grasberg contract, which entitles them to a 40 % share of all production after 2022.
--------------------