2) Malnutrition victims in Asmat reach 15 thousand
3) Indonesian Government under fire for slow response to measles outbreak in Papua
---------------------------------
https://www.radionz.co.nz/international/pacific-news/348874/port-moresby-to-host-melanesian-leaders-summit
1) Port Moresby to host Melanesian leaders summit
10:25 am today
The secretariat of the Melanesian Spearhead Group says leaders in the regional grouping will have a summit next month in Port Moresby. 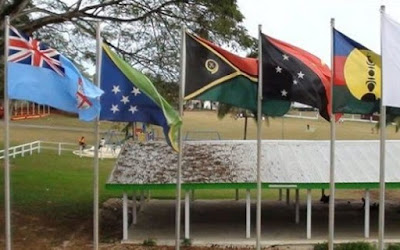 Melanesian Spearhead Group flags Photo: suppl
Papua New Guinea's capital will host the summit from 10-15 February when PNG is to assume the MSG chairmanship from Solomon Islands.
The group also includes Vanuatu, Fiji and New Caledonia's FLNKS Kanaks Movement.
According to the secretariat, PNG's focus for discussions at the summit is on sustainable development goals outlined in the MSG 2038 Prosperity for All Plan.
It's been two-and-a-half years since the last full MSG leaders summit in Honiara, with a number of leaders' meeting deferred.
Since then, MSG's secretariat has reportedly struggled with a lack of financing, and an impasse between members over whether to grant West Papuans full membership.
This impasse was exacerbated by Indonesia's increased involvement in the MSG, supported by Fiji and PNG.
There was also division and confusion over the appointment of a new MSG director-general in 2016.
Fiji's Amena Yauvoli, who was eventually confirmed as the director-general, has been in Moresby this month preparing for February's leaders summit.
Mr Yauvoli met with PNG's Foreign Affairs minister Rimbink Pato and Police Commissioner Gary Baki among other officials to iron out details for the summit.
A parallel MSG police ministers meeting is beni scheduled where the members will also consider security assistance to PNG when it hosts the APEC leaders summit in November.
————————————————
https://en.antaranews.com/news/114379/malnutrition-victims-in-asmat-reach-15-thousand
2) Malnutrition victims in Asmat reach 15 thousand
Reporter: antara  11 hours ago
Jakarta (ANTARA News) - Papua police chief Inspector General Boy Rafli Amar stated that the number of malnutrition victims in Asmat district of Papua had reached 15 thousand people.
"The victims of malnutrition have reached 10 thousand to 15 thousand," Amar noted at the Police Academy (STIK) here on Wednesday.
He mentioned various factors behind malnutrition cases in the district, which includes its remote location, lack of access to health facility, transportation, nutritious food, and low economic level.
"Some rivers depend on tidal waters, which makes it difficult for boats to pass through the river at any time to distribute food," he added.
Amar described the minimal facilities at the public health center (Puskesmas) in Asmat, with lack of paramedics and medical doctors to head the center.
He called on the Police Headquarters` Health and Medical Center (Pusdokkes) to send its physicians to health centers in Asmat.
"Young doctors program and internship in Papua is expected to fill the vacant posts, especially for Puskesmas head," he added.
According to the police chief, two thousand to three thousand vials of measles vaccine are needed.
"For backup, we need some two thousand to three thousand vials of vaccines, so that we can still vaccinate the kids in the near future," he remarked.
Papua police and Cendrawasih military regional command would establish a health task force to map areas that are prone to the diseases and visit the areas to address the problem.
"In some areas, we will trace it. We have information on epidemics in some other areas, such as in Bintang Mountains," he revealed.
On the measles epidemic and malnutrition in Asmat district, he explained that the medical team has provided health services to tackle the epidemics, while medicines and nutritious food, both from the government and private institutions, continue to flow into the district.
Measles epidemic and malnutrition have hit Asmat district since Sept 2017. As many as 61 toddlers had reportedly died due to measles and malnutrition.
Reported by Anita Permata Dewi
(S022/INE)
EDITED BY INE/H-YH
(T.SYS/A/KR-BSR/A/H-YH)

The alarming number of deaths in Asmat has also led to outrage in local Indonesian media.
A strong editorial in the Jakarta Post newspaper accused the Government of caring more about the province's rich natural resources than the Papuan people themselves.
But Jakarta defended its response and said the remote area was difficult to access quickly.
"Yes we have very limited means and staff but this doesn't mean we aren't trying very hard," Agats health department spokesman Steven Langi told Al Jazeera.
"What we need is not just to be criticised, but real help. Those who criticise us I want to invite to work here."
Indonesia's Government announced it was setting up a taskforce in Papua to help contain the outbreak and the Indonesian military said it was also sending more medicine and doctors to the province.
Mr Harsono said authorities need to learn from the crisis in Asmat.
"I wish the Indonesian Government could use this opportunity to listen, we've been talking about this for years, more than a decade in fact," he said.
----------------------