THE BATTLE FOR WEST PAPUA

http://www.jpolrisk.com/the-battle-for-west-papua/?fbclid=IwAR2cpOP64SOgxRv-J9gCB_NSKmUgpSHAQ7IETu6GSh5lGJhZn7NRHAbUPpo
Posted on January 18, 2019 by admin
THE BATTLE FOR WEST PAPUA
Journal of Political Risk, Vol. 8, No. 1, January 2019
By Ben Bohane
Reports of the Indonesian military using white phosphorous munitions on West Papuan civilians in December are only the latest horror in a decades-old jungle war forgotten by the world. But new geopolitical maneuvering may soon change the balance of power here, prompting regional concern about an intensifying battle for this rich remote province of Indonesia. It is time for the US and Australia to change policy, complementing Pacific island diplomacy, or risk a major strategic setback at the crossroads of Asia and the Pacific.
Once again, Papuan highlanders have fled their villages into the bush where they are starving and being hunted by Indonesian security forces. 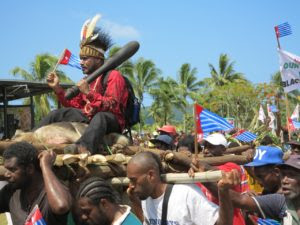 Supporters carry West Papuan leader Benny Wenda through Port Vila, Vanuatu, during a visit on December 1, 2016. Pacific island countries across the region are growing in solidarity with the West Papuan independence movement, according to the author. Credit: Ben Bohane.