Freeport McMoRan’s Grasberg copper mine in Indonesia, the world’s second-largest for the metal by capacity, reopened Saturday after a worker roadblock stopped production for five days and helped push the metal’s price to a two-month high.


Access to the site, located in the mountains in Papua province in eastern Indonesia, was restored this morning and normal operations are resuming, Daisy Primayanti, a spokeswoman at Freeport Indonesia, said in a phone interview.
The roadblock has been cleared, said Juli Parorrongan, a spokesman for the Freeport Indonesia workers’ union.
“The union has said to the workers that they should go back to work,” she confirmed on Saturday.
Grasberg has been plagued by labor strife in recent years. Workers seeking higher wages held a strike in 2011 and the mine was closed for months following a tunnel collapse in 2013.
The protesters, who the union said numbered around 100 on Friday, had been demanding bonuses as an incentive for not taking part in a work stoppage last year. Shipments of concentrates from stockpiles continued during the closure.
Copper for delivery in three months rose 3.3 percent to $6,045 a metric ton on the London Metal Exchange on Friday, following a 3.3 percent advance the day before.
The metal touched $6,082.5 on Friday, the highest since Jan. 12.
Freeport Indonesia didn’t reach any agreement with the workers on their demands and dialog is continuing, spokeswoman Primayanti said.
Shares of Phoenix-based Freeport, the largest US miner, rebounded 6.7 percent in New York on Friday to close at $18.41, recouping a 5.3 percent loss on Thursday.
Bloomberg

MARCH 21, 2015
PRESS RELEASE
Dear everyone
It brings me much sadness and grief to report that 2 days ago on the 19th of March; 4 more of my people were shot by the Indonesian police. 1 was killed and at least 3 more were arrested, all simply for attending a peaceful fundraiser in Yahukimo, West Papua.
Yesterday morning, the Indonesian police opened fire on a peaceful gathering of Papuans who were fundraising money for humanitarian aid after Cyclone Pam struck Vanuatu and many other nations in the Pacific. This fundraising was coordinated across West Papua by church groups in West Papua and the umbrella organisation, the United Liberation Movement for West Papua. The entire gathering was forcibly dispersed by armed Indonesian police who can be seen on a photo from the day, opening fire upon my people.
My people were just mourning and trying to raise funds for their brothers and sisters in the Pacific but were gunned down mercilessly.
My people are still mourning for our brothers and sisters in Vanuatu who have died during Cyclone Pam. What threat are we posing by holding a peaceful gathering to raise funds for humanitarian aid? Now we mourn also for the West Papuans who have been so brutally shot and arrested in the last few days. by the Indonesian police. We want the world to see that we West Papuans are suffering under such a brutal system that it kills us just for raising funds for aid after natural disasters.
We are always so grateful for all the incredible support for our freedom shown to us by our brothers and sisters in Vanuatu and the rest of the Pacific and we want to show that we give them our full support too during their suffering from Cyclone Pam.
Just for offering sympathy and what little funds we can raise for relief to our Pacific brothers and sisters, we continue to be shot like animals by the Indonesian state. Earlier this month a 17 year old West Papuan activist, Deni Bahabol was also tortured and murdered by suspected members of the Indonesian Special Forces in the same region of Yahukimo.

Does Indonesia have no mercy or sympathy for Melanesian people at all?

No matter how brutal the Indonesian response, we West Papuans will continue to mourn and raise funds and support for our people in Vanuatu and other Cyclone affected areas. No-one can stop us struggling for freedom and no-one can stop us from supporting our Pacific brothers and sisters.
My message to the people of Vanuatu and the Pacific remains that we will always continue to stand with you, no matter how many of us are locked up and no matter how many bullets the Indonesian police shoot at us. We will always stand up for our suffering brothers and sisters.
I hope that people all around the world will continue to show support for the people of Vanuatu and everyone who was affected by Cyclone Pam and I would like to thank everyone who has donated to my Pacific Disaster Appeal, helping to raise funds internationally for providing aid directly to those affected by Cyclone Pam.
I am sure that one day West Papua will be free and we will be able to gather and show support for all our brothers and sisters across the Pacific in peace and freedom.
Benny Wenda
West Papua independence leader
Spokesperson for the United Liberation Movement for West Papua
www.bennywenda.org
www.freewestpapua.org
Benny is available for media inquiries about the incident. Any media is welcome to contact him though this press contact number: +44 (0)7411053953
Email: office@bennywenda.org

Throughout the past week the Yahukimo regional branch of the KNBP (West Papua National Comittee) held a fundraising campaign in support of the United Liberation Movement for West Papua (ULMWP).
The AWPA report says: 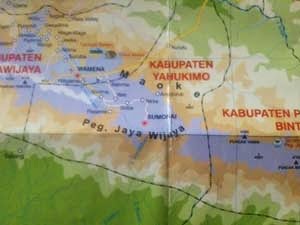 On the morning of Thursday, March 19, as preparations were underway for the closing ceremony in Dekai, Yahukimo regency, the Yahukimo District Police and a mobile brigade arrived and started tearing down the stage, confiscating  KNPB banners, megaphones, speakers, microphones and cameras and used   force to disband the crowd. According to the police the organisers did not have a permit to hold the event.
The crowd became angry at the heavy-handed approach by the security forces and in the melee that followed Brimob members fired at the crowd resulting in one person killed and 3 wounded.

Joe Collins of AWPA said: “The situation in Yahukimo remains tense with the security forces on patrol and conducting searches. They also raided the secretariat office of the Yakuhimo KNPB removing and damaging equipment”.

In other incidents
A police officer's revolver was grabbed as the security forces dispersed the people at the closing ceremony and it was also reported the Dekai Airport was besieged to prevent troop reinforcements from arriving.

The list of casualties are from first reports and it is understood that human rights defenders are on the ground investigating the incidents and will report in more detail after their investigation.

Casualties
Obang segenil aged 48 years, a village head who was shot and died while receiving medical attention in Yakuhimo hospital
Samson Giban (42), shot in the left hand
Titus Giban (39), shot in the ribs
Iner Sekenil (16), shot in the hand.