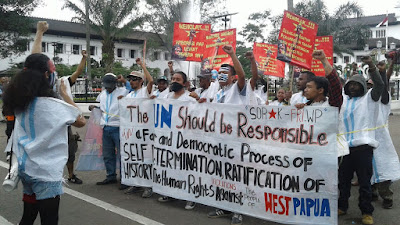 Penulis
Arnold Belau
-
Januari 11, 2017
JAYAPURA, SUARAPAPUA.com- Institute of advocacy of human rights in Papua, Research, Study and Development of Legal Aid (LP3BH) Manokwari noted, human rights violations continue to increase significantly in Papua in the context pengekakangan and deprivation of the right to freedom of opinion (right to freedom of speech), the right to freedom of expression (right to freedom of expresion) as well as the right to freedom of association and assembly (right to freedom of assembly).
LP3BH explained the facts pointed to was the use of a security approach that emphasizes the element of violence in dealing with any peaceful protest of the people of Papua are always expressed opinions and political views of different political histories of the integration of Papua, as well as demands for the opportunity to obtain the right to self-determination (right to self determination).
LP3BH noted that in the early period of his administration, President Joko Widodo indeed initiate positive steps with intent and also promise to solve the problem of human rights violations were severe (gross violation of human rights) in the Land of Papua. The aim is obviously to restore the confidence of the people of Papua to the Indonesian government. This is actually in line with the letter f preamble of the Special Autonomy Law No. 21 ear 2001 for Papua Province, as amended by Act No. 35/2008.
Indeed there is a policy to allow access by foreign journalists to enter the Land of Papua, but unfortunately because of the policy shaped the statement did not even followed up with specific regulations.
"So until now the effects are no foreign journalists could freely and impartially sign and publish the real situation in Papua on the international scene in a transparent and accountable. Likewise, the granting amnesty to political prisoners (prisoners) as well as political prisoners (detainees) had no impact on no reoccurrence of this Cenderawasih earth, "he explained in a press release received suarapapua.com not long ago.
"Our records until the end of 2016, had almost 8,000 Papuans were constantly arrested, abused and detained and prosecuted, for expressing different political views peacefully. They were fi sejimlah big city in Papua like in Jayapura, Wamena, Merauke, Timika, Nabire, Serui, Biak, Manokwari, Sorong and Fakfak as well as some major cities outside Papua, such as Jakarta, Yogyakarta, Denpasar, Makassar and Manado, "said LP3BH.
It is said, these facts point to the critical situation of human rights in the context of respect for and protection of the right to freedom of opinion, freedom of expression and the right to freedom of association and assembly are very deprived by the Government of Indonesia in Papua throughout the last 10 years.
"It was done by using a mute violence and democracy through the implementation of Makar Articles 106 and 110 of the Criminal Code and Article 160 of the Criminal Code concerning incitement and disturbing public order," he said.
Explained, LP3BH also noted that never appear to have a fair legal action, firmly and impartially by the TNI and police officers who are found involved in acts of violence dimension of human rights violations against civilians in Papua until the end of this year.
"So the more foster continued impunity hard difuga state apparatus violent dimension of human rights violations without ever prosecuted in Papua," tulisanya.
Meanwhile, the slightest unseen their Indonesian government's seriousness in giving political support full and unequivocal efforts disclosure and settlement of cases of human rights violations weight in Papua such as Wasior (2001), Wamena (2003), Paniai (2014).
Political support from the Government, especially the President Jokowi very relevant and urgent for the sake of legal settlement of the three cases the appropriate mechanisms stipulated in the constitution of the Republic of Indonesia Number 26 Year 2000 on Human Rights Court.
Affirmed, that the president should issue strict legal decision to stop the pattern of the security approach has proven to be a classic, outdated, not pro-democracy and human rights potentially violated throughout more than 50 years in the Land of Papua.
"Likewise labeling separatist movement for the peaceful people of Papua are always driven Papuan youth today should be replaced with a pattern peaceful approach is more soft and promote dialogue as a medium that rewards on the values ​​of equality by always respecting each disagreements democratically and uphold the values ​​and principles of human rights itself, "he said.
For it is written, LP3BH urged the Indonesian government under President Jokowi unyuk immediate demilitarization in Papua and eliminate models approach to security (security approach) in addressing the local political situation with a peaceful approach and dialogue.
Mentioned, settlement of cases of human rights violations such as the weight of Wasior, Wamena, Paniai and also Sanggeng-Manokwari should be the main agenda for the government of Indonesia in the year 2017 work according to the rules and regulations that apply. "LP3BH and civil society / indigenous Papua is preparing legal steps to bring these four cases to international lines, where the Indonesian government can not show the commitment and political support are really in resolving these cases," he said.
Announcers: Arnold Belau