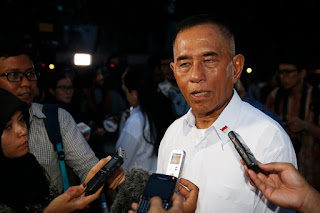 Defense Minister Ryamizard Ryacudu said a misspelling of Pancasila, the name for Indonesia's state ideology, was not the official stance of the Australian government and that it was the personal action of an individual officer. (Reuters Photo/Darren Whiteside)

By : Robertus Wardi & Eko Prasetyo | on 8:23 PM January 05, 2017
Jakarta. Defense Minister Ryamizard Ryacudu said a misspelling of Pancasila, the name for Indonesia's state ideology, was not the official stance of the Australian government and that it was the personal action of an individual officer.
Ryamizard said this includes an insult against Indonesia with the mention of controversial issues surrounding Papua, Timor-Leste and the former Indonesian Communist Party (PKI).
"In principle, it is not their [Australia's] policy. It was a personal act. They regret what happened and have acted firmly against the perpetrator," Ryamizard said in Jakarta on Thursday (05/01).
The Australian government has sacked the officer responsible from his position as principal of a military academy and launched an investigation into the incident.
"They [Australia] have apologized and sacked the principal of the institution," Ryamizard said.
The incident occurred when a language instructor from the Indonesian Army's Special Forces Command (Kopassus) received learning material that contained references deemed offensive to the country, such as a misspelling of Pancasila as "Pancagila," which can be translated as "crazy five."
The materials were identified during a joint training session at an Australian military base in Perth.
Separately, Indonesian Military chief Gen. Gatot Nurmantyo has confirmed that he had received a letter of apology from the Australian Defense Force, sent by Australian Air Force chief of staff Air Marshall Mark Binskin.
"I am a friend of Air Marshall Mark Binskin. I have replied to his letter thanking him for the apology. We have suspended the joint training, as discussions will continue after the investigation ends," Gatot said.

Australia expressed regret on Thursday for causing offence to Indonesia in material at a Perth military base which allegedly insulted Indonesia’s founding ideology and promoted independence for West Papua. Both the Australian and Indonesian governments have scrambled to downplay Indonesia’s unilateral and sudden suspension of military cooperation, with defence ministers from both countries insisting the relationship is strong

Jakarta, Jan 5 (Antara) - Indonesias military commander, General Gatot Nurmantyo, has said the chief of staff of the Australian Air Force, Marshal Mark Donald Binskin, has offered an apology over the Pancasila insult case committed by a Australian Defense Force member."I thank Australian Air Force chief of staff Marshal Mark Binskin for the apology, and the decision to review the Australian Defense Force curriculum and investigate the case," he said here on Thursday.Marshal Mark Binskin has sent a letter to the Indonesian military commander offering an apology, plans to improve the curriculum, and investigate, as well as send the chief of the Australian Army, to visit the Indonesian army chief of staff and the Indonesian Military Force (TNI) commander to ask for an apology and clarify the incident."Marshal Mark Binskin and I are friends. He is my good friend and he has sent a letter to me with regard to offering an apology," he said.Indonesias minister of defense Ryamizard Ryacudu said that Australias minister of defense Marise Payne offered an apology to Indonesia following the insult on Indonesias ideology Pancasila committed by one of the ADF member."Australias minister of defense wrote me a letter offering an apology over the incident," he said at his office here on Thursday.Marise Payne also called him personally on Thursday afternoon and again expressed regret over the incident."Australias minister of defense also said he would investigate the case thoroughly and firmly follow it up," he said.Ryamizard said he has accepted the apology and respected the Australian stand."I will show the letter to (the President) later," he said.General Gatot Nurmantyo has temporarily suspended military cooperation with the ADF since December 2016.(*)
Posted by AWPA Sydney News at 11:41 AM