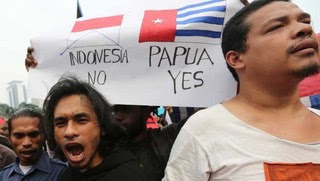 West Papua pro-independence supporters shout slogans during a rally commemorating the 55th anniversary of the New York Agreement, in Jakarta, Aug. 15, 2017. AP
TEMPO.CO, Jakarta - The security joint team of the Police and the Indonesian Army has prioritized peaceful negotiation with the Papuan criminal armed group, which has detained 1,300 people in the villages of Kimberly and Banti of Tembagapura Sub-district, Papua.
"The joint team has tried to contact the armed group leader. However, no negotiation took place, as they have not communicated with the security officers," Head of Public Relation Division of Indonesian Police Inspector General Setyo Wasisto said here, Friday.
According to Wasisto, the officers have not received any information about any harmful activity or violence perpetrated by the terrorists.
The officers still have not received any request for ransom from the armed group.
The terrorists have given women access to buy food and daily necessities for the people, he added.
However, the police stressed the people in the villages would be experiencing trauma due to the detention.
The Papua Regional Police has coordinated with the Papua Cendrawasih Regional Military Command to handle the hostage incident.
Indonesia Police Chief General Tito Karnavian also asked the security officers to prioritize negotiation efforts by involving religious and public figures.
Chief of Papua Regional Police Inspector General Boy Rafli stated the hostages included the people of Banti and Kimberly villages, as well as non-local people who worked as traditional gold miners.
The hostage situation is disturbing activity and endangering the life of people in the area.
The hostage takers are armed with guns and weapons, including machetes and arrows.
Security officers have estimated the total members of the armed group to be some 100 persons.
The Police and the Indonesian Military have prioritized the safety of people in both the villages.
ANTARA
—————————————————
A google translate. Be-aware google translate can  be a bit erratic.
Original bahasalink at
http://tabloidjubi.com/artikel-11418-ketua-dpr-papua--jangan-korbankan-rakyat.html
2) Speaker of the Papua House: do not sacrifice the people
Sabtu, 11 November 2017 — 09:02
Papua No. 1 News Portal | Jubi,
Jayapura, Jubi- Papuan People's Representative Council chairman Yunus Wonda asked all parties not to make people victims. Yunus's comments related to the shooting incident that occurred in the area of ​​PT Free Port Indonesia and visited the civil violence that had been busy circulating in the internet media.
"After hearing rumors of shootings that took place in the freport area became a threat to the community," Yunus Wonda said after opening a Triangle Cup event in an autonomous field to reporters on Friday (10/11/2010).
Yunus asks everyone involved as the mastermind of the shooting to stop, he also asks the authorities to take persuasive action. Because what has been a violation of human rights, in Wamena, Wasior, it was because of the sweeping action.
He hopes the violence that could be aired on social media was not repeated. Jonah mentioned all those who had been opposed to quitting from unscrupulous things. "And remember do not let the people become victims," ​​he said.
If the people are tortured then the action is not a struggle, but as a criminal act. Yunus explains the struggle for Papua is not by violence, what else is torturing its own people. (*)
----------------------------------------------------
http://www.news.com.au/world/breaking-news/indonesia-to-storm-papua-rebel-villages/news-story/91a57f1e68446c1892dfdc9528c96409
3) Indonesia to storm Papua rebel villages

Reuters NOVEMBER 12, 20171:51AM
Around 200 Indonesian police and military personnel have been deployed in the eastern province of Papua where they say villages are being held by rebels.
Indonesian security forces in the eastern province of Papua are preparing to storm five villages that they say are being held by an armed rebel group, police officials say.
Around 200 police and military personnel have been deployed and are awaiting orders to secure the area, where an armed separatist group linked to the Free Papua Movement (OPM) is preventing about 1000 people from leaving an area near a giant copper mine, operated by the American miner Freeport-McMoRan Inc .
"Today the joint police and military forces have occupied various posts to be able to take action," said Papua police spokesman, Suryadi Diaz.
"They will be taken dead or alive," he said of the around 100 rebels that police say have tortured and abused the villagers since taking over the area several days ago.
A state of emergency has been declared in the area and at least 300 additional security forces have been deployed to the area of the province after a string of shootings since August 17 that killed one police officer and wounded six.
The rebel group, the West Papua National Liberation Army (TPN-OPM), on Friday denied occupying villages near the mine, but said it was "at war" with the police, military, and Freeport.
Papua has had a long-running and sometimes violent separatist movement since it was incorporated into Indonesia after a widely criticised UN-backed referendum in 1969.
President Joko Widodo has sought to ease tension in the two provinces by stepping up investment, freeing political prisoners and addressing human rights concerns. This is the first escalation of violence during his term.
Freeport's Grasberg mine has been dogged by security concerns for decades due to a low-level conflict waged by pro-independence rebels in Papua. Between 2009 and 2015, shootings within the mine project area killed 20 people and wounded 59.
More recently, Freeport, the world's largest publicly listed copper producer, has been grappling with labour problems at Grasberg and a dispute with the Indonesian government over rights to the mine.
——————————————————
http://www.en.netralnews.com/news/currentnews/read/14728/concerning.residents.held.hostage.in.papua..house.commission.i.urges.tni.to.act.immediately
4) Concerning Residents Held Hostage in Papua, House Commission I Urges TNI to Act Immediately
Saturday, 11 November 2017 | 14:45 WIB
JAKARTA, NETRALNEWS.COM - Chairman of the House of Representatives Commission I Abdul Kharis Almasyhari asserted the hostage of 1,300 citizens conducted by armed criminal groups (KKB) in Kimbely Village and Banti Village, Tembagapura District, Mimika Regency, has injured the sovereignty of the Unitary State of the Republic of Indonesia (NKRI). To that end his side asked the Indonesian Armed Forces (TNI) to act carefully to free the hostages.
"This is no longer a matter of criminal groups, this injures the sovereignty of the NKRI, every inch of this Republic's land must be safe from any terror of this kind of group," Kharis said in a written release to reporters in Jakarta, Saturday (11/11/2017).
According to member of the House of Representatives from the PKS faction, the TNI and the State Intelligence Agency (BIN) certainly already have data and intelligence information relating to the case so we can confidently analyze the situation and conditions in the field to take rescue measures and other necessary actions, of course with cooperation and coordination with the National Police (Polri).
"We want everything is done in a measurable way and prevent the hostages from getting hurt let alone someone is killed," Kharis said.
This legislative member from Solo, Central Java, sees that persuasive efforts should be done especially when it comes to the safety of the citizens held hostage, but repressive efforts must also be prepared.
"I agree with the decisive steps that the TNI and the Polri will take, but do not forget we must also trim the network of weapons and ammunition suppliers who have been taking advantage of the conflict situation in Papua," he explained.
"The international world must also open eyes and see this problem in Papua more objectively. With this incident we hope that the role of diplomacy on the issue of Papua is also important to be further enhanced. NKRI and the whole country from the east to the west is the sovereign territory that must be respected by all countries. Lest there is any intervention in Indonesia's internal affairs," concluded Kharis.
----------
Posted by AWPA Sydney News at 11:26 AM