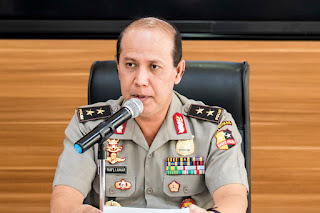 Jakarta. Police on Saturday (11/11) issued a wanted list of 21 people from an armed group that is besieging two villages in Timika, Papua.

The militants have cut access to 1,300 residents of Banti and Kimbely near the Utikini river in Tembagapura district, next to the Grasberg copper mine operated by the Indonesian unit of US mining giant Freeport-McMoRan.
"Around 100 people came to the location [the villages]. Those with criminal record are on the wanted list," Papua Police chief Insp. Gen. Boy Rafli Amar told reporters in a WhatsApp message.
According to Boy, almost all of the militants carry weapons.
"We want to capture them," he said.

The men do not let the villagers out since Tuesday. Among the residents are 300 specialized gold miners.
Police believe the wanted militants are led by Sabinus Waker, who tops the list. They are accused of murder, shootings and illegal gun ownership, and may face the death penalty, if convicted.
According to the police, Sabinus and his men attacked policemen and Freeport Indonesia staff in a series of shootings in October, killing one officer.
-------------------------