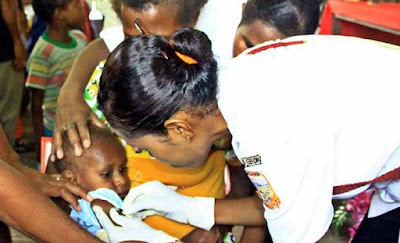 Immunisation program in West Papua – Jubi
Jayapura, Jubi – Papua still face a problem with immunisation program. The comprehensive primary immunisation is under the national target; it is 80% in the most districts. Even in some districts that considerably intense immunisation program, the Universal Child Immunization (UCI) rate is still lesser than 80%.
The Head of Papua Health Office dr. Aloysius Giyai explained this after opening the cross-sectoral meeting in the launch of Measles and Rubella Campaign Phase II of Papua Province at Grand Abe Hotel, Jayapura on this week.
“The Rubella Measles Campaign in Papua is targeting about one million nine-month infants and under 15-year-old children. Our goal to reach the community immunity should be over 95%,” he said.
Meanwhile, Ani Rumbiak, the Special Staff Member of Papua’s Governor for Human Resources, said many villages have a problem to obtain the thorough immunisation program due to the access to health services.
“The obstacles are geographical access, health and logistics personnel. Sometimes parents also become a constraint when they do not bring their children to get an immunisation,” she said. (*)
Reporter: Agus Pabika
Editor: Pipit Maizier
----------------------------------------
https://www.hrw.org/news/2018/06/08/indonesia-backpedals-accountability-past-atrocities
Indonesia Backpedals on Accountability for Past Atrocities
Attorney General Dismisses Rights Commission Report as ‘Opinions and Assumptions’
Phelim Kine
Deputy Director, Asia Division

The Indonesian government is backing away from commitments to provideaccountability for grave past human rights abuses.
Indonesia’s Attorney General H.M. Prasetyo dismissed a report on past rights abuses compiled by the official National Commission on Human Rights and submitted to his office as “opinions and assumptions.” Prasetyo also noted the difficulties in investigating decades’ old cases, including that witnesses and perpetrators may no longer be alive, but said nothing about overcoming those obstacles and achieving justice for the victims and their families. More than anything else, this speaks volumes about the government’s lack of enthusiasm for pursuing accountability for past atrocities.

The government has been silent on plans announced in May 2015 for a “reconciliation commission” that would pursue a “permanent solution for all unresolved human rights abuses” of the past half-century. Those abuses include the government-orchestrated massacres of 1965-66 that resulted in up to one million deaths, violations by government security forces in the restive provinces of Papua and West Papua, and a campaign of extrajudicial killings linked to security forces between 1982 and 1985 known as the Petrus shootings.
President Joko “Jokowi” Widodo had originally assigned his then-security minister, Luhut Binsar Pandjaitan, to oversee that process. But Jokowi’s replacement of Pandjaitan in July 2016 with former general Wiranto, who was indicted for crimes against humanity in East Timor by a United Nations-sponsored tribunal, has fueled doubts about his government’s commitment to the accountability process.

Jokowi supporters have told Human Rights Watch that in the run-up to the presidential elections in 2019, the president should avoid potentially divisive issues such as accountability for past human rights abuses. But this ignores the importance for victims and the rule of law of holding those most responsible for serious crimes to account. Jokowi should instead recognize that he has a historic opportunity to start the process of bringing meaningful justice to the huge number of Indonesians affected by past rights violations and direct his attorney-general to facilitate that process rather than bemoan its challenges.
——————————————————————
http://tabloidjubi.com/eng/local-community-must-stop-selling-the-land-says-local-legislator/
3) Local community must stop selling the land, says local legislator
Published 16 hours ago on 8 June 2018 By admin
Merauke, Jubi – A member of the Regional House of Representatives of Merauke Agency Hendrikus Hengky Ndiken appealed indigenous Papuans in Merauke on Wednesday (6/6/2018) to not selling the land anymore because it is the only assets of the Marind tribe.
“We should consider our children. If all land sold, what would left for future generation?” he asked.
Furthermore, he said customary leaders should play a role to remind people to not selling the land. He also asked the local community to no longer digging and mining the sand. “It can be noticed there are big holes everywhere in the mining areas flooded with seawater during the high tide.”
“For instance, the mining area in Kampung Urumb and surrounding areas where the sand excavation increasingly occurred. People better use the land for farming,” he added.
Meanwhile, the Unit Head of Merauke Civil Service Police Elyas Refra said his office conducts routine scrutiny on illegal sand mining. “Indeed, in some places, sand mining has occurred. We are persuasively approaching people to not digging the sand anymore because it is very hazardous and has an impact on the environment,” he said. (*)
Reporter: Frans L Kobun
Editor: Pipit Maizier
-----------------------------------------
https://en.antaranews.com/news/116088/indonesia-elected-non-permanent-member-of-unsc
4) Indonesia elected non-permanent member of UNSC
Reporter: Aditya Eko Sigit Wicaksono  3 hours ago
Jakarta (ANTARA News) - Indonesia was elected a non-permanent member of the United Nations Security Council for a two-year term on Friday."Alhamdulillah (praise be to God), during the UN General Assembly, Indonesia was elected as a non-permanent member of the UN Security Council representing the Asia-Pacific Group to replace Kazahkstan, which will conclude its terms at the end of 2018," the Minister of Foreign Affairs, Retno Marsudi, said in a video conference live from New York.Indonesia won 144 votes to beat the Maldives, 46 votes, for the one seat allocated to the Asia-pacific group. As many as 190 member-states of the UN voted in the election; only 126 votes, or two-thirds, were required to win.The President of the 72nd Session of the UN General Assembly, Miroslav Lajcak, announced that Indonesia was elected a non-permanent member of the UNSC for 2019-2020 along with South Africa from the African Group; the Dominican Republic from the Latin American and Caribbean Group; and Belgium and Germany from the Western European and Others Group.Indonesia has held the seat earlier in 1973-1974, 1995-1996, and 2007-2008.The Security Council has 15 members -- five permanent (United States, United Kingdom, France, Russia, and China) and 10 non-permanent serving for two years.