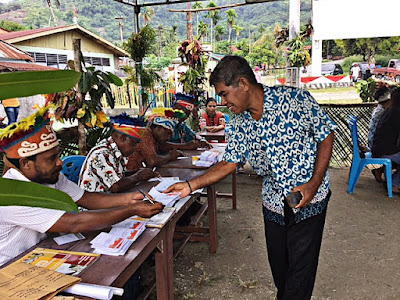 Ethnic flair: A voter collects a ballot from an election official in traditional Papuan dress on June 27 at polling station TPS 005 in Awiyo subdistrict, Abepura district, Jayapura, to vote in the Papua gubernatorial election. (JP/Nethy Dharma Somba)
Voters felt a distinct cultural flavor upon entering the TPS 005 polling station in Awiyo, Abepura district, Jayapura, to cast their votes in the Papua gubernatorial election on Wednesday.
Polling station officials were seen in traditional Papuan attire representing the Wamena and Nafri cultures, as well as in traditional dress from outside the province, such as Toraja and Makassar in South Sulawesi.
“This was the result of an agreement among the residents of our area where this TPS is located, as a way to show our enthusiasm for participating in the gubernatorial election,” Awiyo subdistrict head Karel Hanasbey said on Wednesday.
Karel said the local people wanted to mark the election in this way, because it only happened once every five years and they wanted to leave behind a beautiful memory in organizing the event.
He added that TPS 005 was also located on a special site where Japanese troops landed at Abe Beach during World War II. 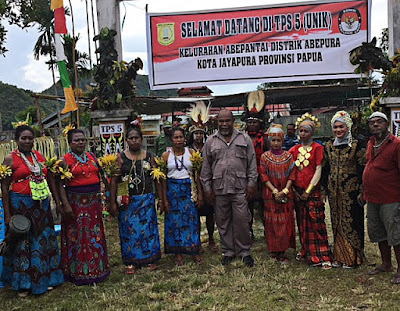 Diversity: Election officials in traditional dress from across the country pose for a group photo on June 27 at polling station TPS 005 in Awiyo subdistrict, Abepura district, Jayapura. (JP/Nethy Dharma Somba)
“I voted for a candidate that I believe is capable of making the people proper for the next five years,” said voter Yusuf Yarangga.
Voters had gathered at TPS 005 since 8 a.m. local time, and 532 voters had cast their votes at the polling station.
The two pairs competing in the Papua gubernatorial election are Lukas Enembe-Klemen Tinal and John Wempi Wetipo-Habel Melkias Suwae.
A total of 3,411,217 voters cast their ballots today at 9,222 polling stations in 5,498 subdistricts and 560 districts across Papua. (swa/ebf)
—————————————————————
http://www.thejakartapost.com/news/2018/06/27/papuan-regencies-postpone-voting-amid-security-concerns-glitches.html
2) Papuan regencies postpone voting amid security concerns, glitches
Nethy Dharma Somba and Suherdjoko The Jakarta Post
Jayapura/Semarang | Wed, June 27, 2018 | 02:24 pm
The Papuan regencies of Paniai and Nduga have postponed voting, slated for Wednesday, amid security concerns. The two regencies should have hosted regency elections as well as Papua gubernatorial election.
“It has been recommended that voting in those two regencies be postponed because of security concerns," General Elections Commission (KPU) commissioner Wahyu Setiawan told the press in Semarang, Central Java, on Wednesday.
Paniai regency postponed voting for the regency election while going ahead with voting to elect the governor. Voting in the Paniai regency election had to be postponed because of differences between the provincial office of the General Elections Commission (KPUD) and the local KPUD chapter regarding qualified candidates.
The KPUD Paniai had ruled that only one candidate pair had passed the selection process, but the provincial chapter had printed two candidate pairs on the ballot papers. The commissions have yet to agree on a definitive solution, thus, they decided to postpone voting.
Meanwhile in Nduga, an ongoing conflict between security personnel and an unidentified armed group around Kenyam airport has hampered the distribution of ballot papers to 29 districts.
“We have recommended to resume voting another day, but we have yet to set the date,” Anugerah Patah, a member of the Papua Elections Supervisory Agency (Bawaslu), told The Jakarta Post.
Papua Police chief Insp. Gen. Boy Rafli Amar assured the public that voting in all other areas of the province was running smoothly. (swd)
--------------------

Posted by AWPA Sydney News at 1:53 AM