1) Indonesia yet to allow UN Commissioner into Papua

2) Bernhard Marjen: West Papuan journalist and ex-policeman
3) Papua’s legislator suspects an intrigue behind foreigners’ deportation
4) Activists hold a long march in Manokwari to commemorate 17 years of Wasior human rights violation
----------------------------------
https://www.radionz.co.nz/international/pacific-news/359935/indonesia-yet-to-allow-un-commissioner-into-papua
1) Indonesia yet to allow UN Commissioner into Papua
The United Nations High Commissioner for Human Rights has expressed concern at not yet being able to visit Indonesia's Papua region.
Zeid Ra'ad Al Hussein told a meeting of the Human Rights Council he was concerned the government's invitation to visit Papua had still not been honoured.
In his global update on human rights issues, Mr Al Hussein said he had been invited to visit Papua during his visit to Indonesia in February.
There had been positive engagement by the Indonesian authorities in many other respects, Mr Al Hussein said.
—————————————————
https://asiapacificreport.nz/2018/06/19/bernhard-marjen-west-papuan-journalist-and-ex-policeman/
2) Bernhard Marjen: West Papuan journalist and ex-policeman
By PMC Editor - 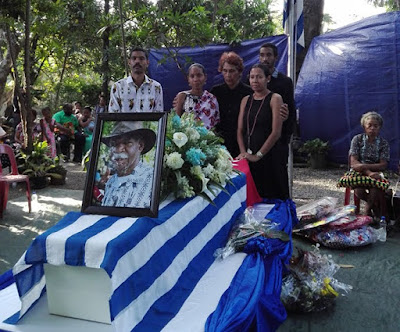 OBITUARY: By Sincha Damara in Port Moresby
Bernhard Marjen was born in 1955 in Sorido, a village on the island of Biak on the West Papua side of the border with Papua New Guinea.
His father was a radio broadcaster, they moved to Hollandia (Jayapura) in the 1960s where he began his education with sister, Nelly, in the Dutch-led administration.
It was at a time when West Papua was moving to self-determination. Tensions were high but the children did not grasp the enormity of the activities taking place. They were only curious about why things had to be done a certain way, such as not to display the Morning Star flag in public. This is illegal under Indonesian law with up to 15 years in jail for punishment.
Their father, Elias Marjen, the radio rroadcaster and his cousin, Benedictus Sarwom, Information Officer in the Dutch-led government were in the thick of things, relaying important information and awareness about independence through the airwaves.
They both worked hard to keep the people’s hopes alive – freedom from the Dutch government against Indonesia’s push to gain control.
Sadly though it was not to be. Closely monitored and with their lives at risk, they were told to leave West Papua with their families and what they had on them – not a word of their departure being uttered to anyone, not even their parents, siblings, cousins and so on.
On the 9 March 1963, both men, their wives and two children boarded a ship bound for Madang in Papua New Guinea.
Heading to new homeOut at sea and as the sun was setting , they realised they were on foreign seas heading to a new home. Elias Marjen looked out to sea and explained to his two young children: this is it, there is no going back.
Faced with the situation before them, the siblings grew close and stayed close into adulthood.
From Madang they were flown to Port Moresby, met by government officials, including Maori Kiki, later Sir Maori Kiki, and driven to their new home at Hohola which was a growing surbub back then.
Being schooled in the Dutch-led government, Ben and his sister spoke Dutch and Bahasa Malay. However, abruptly plucked out of their home, they had to learn to speak English.
Ben completed his education in PNG and Perth, Australia.
He married a beautiful woman, Shirley Baptist from Milne Bay in 1979, and both families hosted a wedding reception at the Islander Hotel, now the Holiday Inn. One of the Black Brothers’ most popular performances was at the wedding reception for Ben and Shirley. This was before the West Papuan band went into exile.
Journalist timesBen worked with the then Office of Information, and as a journalist, with the Times of PNG and as editor of Niugini Nius, later The National newspaper. He also worked with some notable PNG Leaders – Sir Julius Chan, Paias Wingti, the late Sir William Skate, former Milne Bay Govenor Titus Philemon – among them.
In 1984, he joined the Papua New Guinea police force. His passion for community policing earned him the title Chief Sergeant. His last post was Alotau, where he resided.
He was a born leader to the Marjen family and the extended West Papuan community in Papua New Guinea.
His parents have since passed on, including his uncle, Benedictus Sarwom.
Bernhard Daan Alfred Marjen felt the end of his life was near, after being ill for a while. He died in Alotau on Friday, June 1, aged 63. His wish to be cremated was granted.
Rest In Peace Brother.
This obituary was first published on Scott Waide’s blog My Land, My Country and is republished on Asia Pacific Report with permission. 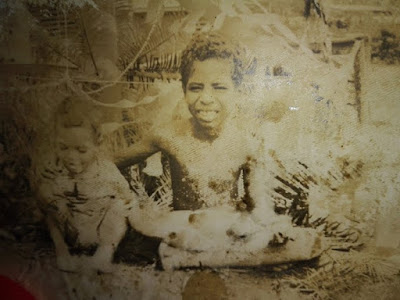 The late Bernhard Marjen as a child in West Papua. Image: Sincha Dimara/My Land, My Country blog
—————————————————
http://tabloidjubi.com/eng/papuas-legislator-suspects-an-intrigue-behind-foreigners-deportation/
3) Papua’s legislator suspects an intrigue behind foreigners’ deportation
Published
on
By
admin
Nabire, Jubi – Papua’s Legislator John Gobai suspects an intrigue behind deportation of foreigners in Nabire.
The statement followed the arrest of twelve foreign workers by Timika Immigration Authority at the bank of Musairo River, where located in the mining area of PT. Pacific Mining Jaya (PMJ).
According to Gobai, he has raised the issue about foreign workers in Nabire to the Papua Police but no prompt response. Papua Provincial Government gave a permit to PT. PMJ to take a mining sample, but the company conducts a gold mining operation.
Jubi has tried to contact the Head of Immigration Office of Tembagapura, Jesaja Samuel Enock, but no answer from the immigration authority until this news written. Based on the information obtained by Jubi, there are currently 22 foreigners in Nabire. (*)
Reporter: Titus Ruban
Editor: Pipit Maizier
———————————————————
http://tabloidjubi.com/eng/activists-hold-a-long-march-in-manokwari-to-commemorate-17-years-of-wasior-human-rights-violation/
4) Activists hold a long march in Manokwari to commemorate 17 years of Wasior human rights violation
Published
11 hours ago
on
19 June 2018
By
admin
Manokwari Jubi – Dozens of human rights activists, the families of victims, and human rights partisans held a protest to commemorate human right violation in Wasior 2011 by holding a long march in Manokwari on Thursday (13/05/2018).
Masses started to walk from the Information Office in Sanggeng to LP3BH Office in Fanindi to submit a legal complaint file to the LP3BH Director, Yan Christian Warinussy.
The Chairman of the Council of Indonesian Trade Union (GSBI) West Papua, Yohanes Akwan, in a press release declared that up to 17 years of Wasior Case occurred, the state remains to neglect the incident that occurred in 2001.
“We submit our aspirations officially as well as a request to LP3BH to continue to voice the cases of human rights violations in Papua to the international community,” he said.
Meanwhile, the LP3BH Director Yan Christian Warinussy said this complaint was part of the respect towards the human rights. “This is a part of human rights enforcement, as well as a responsibility of human rights defender to accept this complaint.
The Indonesian Human Rights Commission once investigated the Case of Wasior in 2003, but the case closed at the level of investigation. At that time, Warinussy was a member of Wasior Human Rights Investigation. (*)
Reporter: David Sobolim
Editor: Pipit Maizier
------------------------------------
Posted by AWPA Sydney News at 2:17 AM