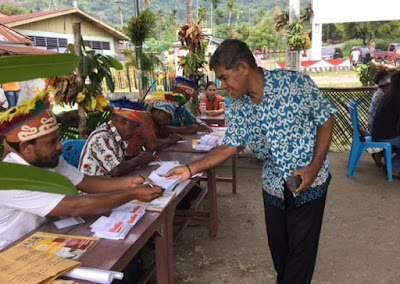 A voter receives a ballot paper from an election official wearing a traditional Papuan outfit on June 27 at polling station TPS 005 in Awiyo subdistrict, Abepura district, Jayapura, to vote in the Papua gubernatorial election. JP/Nethy Dharma Somba (JP/Nethy Dharma Somba)
An unidentified armed group launched a shooting attack in Papua on Wednesday, in the second attack in the region this week in the wake of the Papua gubernatorial election.
Torere district head Obaja Froaro was killed when unknown armed assailants allegedly shot at a speedboat he was on, on Wednesday at around 4 p.m. local time in Torere in Puncak Jaya, a regency in Papua's restive central highlands.
"The Torere district head was shot to death by the criminal armed group while transporting the Torere people's ballot boxes right after the voting," Papua Police chief Insp. Gen. Boy Rafli Amar said in Jayapura on Thursday.
Two police officers, who were on board the same speedboat, went missing in the ambush.
"The two police officers are still missing," Boy said, referring to a group of Puncak Jaya Police officers who were in charge of guarding the Dow election materials and securing the Papua gubernatorial election.
Obaja and a total of nine Puncak Jaya Police officers were on their way from the Dow polling station to Torere to transport boxes full of filled-out ballots.
Votes for the Papua gubernatorial election were cast at the Dow polling station earlier that day.
"Seven other police officers survived," Boy said.
Another speedboat carrying local residents escaped the gunfire by immediately fleeing the scene when the alleged shootings started.
It was the second incident in Papua this week after a Twin Otter aircraft carrying election material and police personnel was fired on by unidentified assailants shortly after it landed at Kenyam Airport in Nduga regency on Monday.
The pilot suffered a gunshot wound to his back, and three residents died in an ensuing firefight between the gunmen and security personnel, the authorities said. (stu/ipa)
Editor’s note: This story has been updated to correct the number of deaths. The death toll is one, the Torere district head, not three as Boy earlier said.
---------------------------------------------
Posted by AWPA Sydney News at 3:51 PM