1) Hundreds join Solomon Islands West Papua rally
About 200 people gathered at a rally in the Solomon Islands capital, Honiara, this afternoon calling on the government to support full membership for West Papua in the Melanesian Spearhead Group. 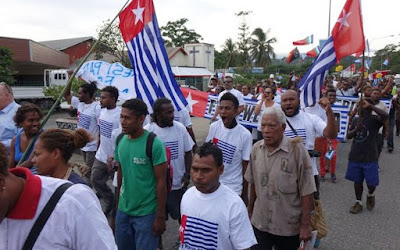 2) Question over promotion of Indonesia within MSG

http://www.lowyinterpreter.org/?COLLCC=104473806&
5) How government is failing the people of Papua
This is part 2 of former Fairfax Media Indonesia correspondent Michael Bachelard's series on Papua. The introduction to the series is here, and here' part 1.
Gaad Piranid Tabuni grew up in a village in the Papuan highlands of Indonesia too remote for any government – colonial Dutch or Indonesian – to maintain a presence. But missionaries lived there, and Tabuni, now one of the most senior public servants in the region, say they made him the man he is.
'I went to missionary schools, grew up in their environment...Their struggle was very tough. They are tough people, so we learned from them. They taught us how to read from scratch...gave us clothes and taught us to wear them'.
A condition imposed by the Indonesian foreign ministry on my trip to the Papuan highlands in November 2014 was that I speak to a government official. Tabuni, an ethnic Papuan like most of the political leaders and public servants here, was the one who gave me the time. Unlike others, he was at work when I called. But if Jakarta expected him to feed me the central government line – that development in Papua is proceeding well – they would have been sorely disappointed.
'If the missionaries say it's A, then it's A; and if it's B, it's B. The Indonesian mentality is different,' Tabuni says. He believes, as do most of his countrypeople, that Jakarta is trying to 'Islamise' and 'Indonesianise' Papua. Papuans, he complained, were not 'strong in our culture' enough to resist.
Indonesia came to Papua in 1963, and had its takeover given a gloss of legitimacy in 1969 in a misnamed 'Act of Free Choice' under the auspices of the UN. In the 1980s, as well as a heavy handed military presence, the state began a series of ill-conceived agricultural construction projects. People were encouraged to grow carrot and sawee (Chinese cabbage) – one hectare each – 'but they didn't teach us how to do in a modern way, so we did it in our own way'.
'It was too much. We couldn't cope, because the education was not enough; the human resources,' Tabuni says.
Come harvest, there was no market for the produce in Wamena, and no way to transport fresh vegetables to the capital, Jayapura. There is still no road, and air freight is punishingly expensive. There have been further attempts to build economic infrastructure over the years, but it's marred by poor quality and the theft of funds.
'The quality of the Indonesian projects is bad. They only last one year,' Tabuni says.
It's not uncommon around Wamena to see road-working equipment rusting in the long grass beside a half-finished highway repair job. 'The planning is always good but in the implementation, it's 70% different from the plans because the money goes missing,' Tabuni says.
Papua's poverty is not for want of money. I repeatedly heard the complaint from Papuans that Jakarta steals the funds generated by the giant Freeport gold and copper mine near Timika. It's Indonesia's largest single taxpayer, returning about $US1.5 billion in revenue last year.
But Vice-President Jusuf Kalla said in January that significantly more money is pumped back into Papua than the mine provides. Much of this is doled out in cash through two welfare packages 'Respek' and PNPM, which spring from Papua's 'special autonomy' from Indonesia, a status granted in 2001.
The rest goes to fund local government administrative areas called 'kabupaten'. To maximise these funds, members of the Papuan elite are continually pressing Jakarta to subdivide kabupaten into smaller and smaller administrative districts in a virtually viral process called 'pemekaran'.  They argue it will get government closer to the people, but the effect is to dilute even further the meagre political talent and administrative oversight, and to open regions to the Indonesian disease of corruption, compounded by a strong Melanesian obligation to share wealth within clan and tribal groups.
'What I'm afraid of is that in five to ten years time, all the Bupatis (local area governors) in Papua will go to jail,' Tabuni observes.
The competition for government jobs is intense. But once a job is secured, many public servants – from teachers and health workers to government officials – take their salaries and do not turn up to work.
Tabuni's ultimate message may well please Jakarta: Papua is not ready for independence. 'Independence means we do things for ourselves and not waiting for people to come and give us money. We build things with our own hands'. In Tabuni's view, the Indonesian Government filched something along the way to incorporation into the unitary republic: 'We lost this high integrity, sense of responsibility that the missionaries taught us. It's almost gone. We don't have a high spirit of hard work.'
Instead, his people have become obsessed by politics, including the politics of independence. 'Now the people who join political parties, go into politics, they have high social status. But for me they are fake leaders...How can we have an independent state with these two problems? We would die. This is my view from the cultural aspect,' Tabuni says.
'The greatest problem is the mental problem...People think they can live by politics alone'.

Agribusiness giants Cargill and Golden Agri-Resources (GAR) are pledging to investigate a palm oil supplier after an Indonesian environmental group presented evidence of rainforest clearing in New Guinea. On Thursday, Greenomics-Indonesia released a report documenting destruction of forests in South Sorong, a regency in West Papua, Indonesian New Guinea. Greenomics found that PT Varia Mitra Andalan (VMA), a subsidiary of publicly-listed PT Eagle High Plantations Tbk, continued to clear high carbon stock forests through March 2015, potentially putting it in breach of sustainability commitments established last year by Cargill and GAR. Both companies buy significant volumes of product from Eagle High Plantations, according to public disclosures. The findings led Greenomics to call on the companies to respect their "deforestation-free" sourcing policies. Both companies are signatories of the Indonesian Palm Oil Pledge (IPOP), a corporate commitment to eliminate deforestation from supply chains. "Cargill has maintained trading relations with a company that remains involved in deforestation – something that is obviously not in line with IPOP and Cargill’s commitment to forest protection in all its agricultural supply chains, including in the palm oil sector," states the report. "In the context of cleaning up their supply chains from deforestation, Golden AgriResources stated that this process would commence in early March 2014." Landsat images prepared by Greenomics-Indonesia showing forest clearing in PT VMA's concession in Wayer and Moswaren Districts, West Papua. In response, Cargill and GAR told Mongabay they would investigate the matter. "We take the allegations concerning PT Varia Mitra Andalan (VMA), a subsidiary of PT Eagle High Plantations, seriously as our suppliers must comply with our no deforestation commitments as stated in our Forest Conservation Policy (FCP)," a GAR spokesperson said. "We have immediately engaged with PT Eagle High Plantations to investigate and clarify this matter." "Cargill takes all grievances and allegations extremely seriously and we are currently investigating these accusations," a Cargill official told Mongabay. "Results of the investigation and the resultant corrective measure(s) will be made available to the public. Regardless of the conclusion, Cargill remains committed to our due diligence procedures to better identify HCV and HCS violations." Cargill added that the current contract between its subsidiary Poliplant Sejahtera, which it acquired last year, and Eagle High Plantations applies only to fresh fruit bunches sourced from West Kalimantan in Indonesian Borneo, so it doesn't actually source palm oil from the plantation cited in the report. Nonetheless, the company affirmed that it remains "firmly committed" to responsible palm oil production and sourcing. "We will reevaluate our relationships with suppliers that do not meet our standards," said Cargill. "Sustainability of the global palm oil supply chain requires the perpetual participation of all parties involved and we encourage constructive dialogue from all stakeholders. Cargill continues working with NGOs and the rest of the industry to adjust and improve our policies towards our goals of protecting forests, peat lands, local communities, and human rights." Greenomics' research is based on legal documents acquired from the Indonesian government as well as satellite data from Landsat and Google Earth. It says forest clearance by VMA in the West Papua concession appeared to accelerate during the first quarter of 2015. According to the Ministry of Forestry, most of the area consists of secondary forest that had previously been selectively logged. The palm oil industry's expansion in Indonesian New Guinea is a major concern for human rights groups and environmentalists. The region — which is seen as Indonesia's "last frontier", with the largest extent of forest cover and the highest proportion of people living in traditional communities — is being targeted by industrial interests, including oil and gas developers, mining companies, loggers, and agribusiness. New projects are also a priority for the Indonesian government, which is seeking to strengthen hegemony in the sometimes restive region. For example, last week officials confirmed that the controversial transmigration program, which moves people from Indonesia's crowded central islands to less populated ones, will be continued in order to support plantation and industrial agriculture development near Merauke.
Posted by AWPA Sydney News at 1:37 AM