Solomons says it is still deciding over West Papua and MSG

Solomons says it is still deciding over West Papua and MSG

Updated at 10:58 am today
The Solomon Islands says it hasn't made a decision yet on the West Papua bid for membership of the Melanesian Spearhead Group.
While the Fiji Prime Minister, Frank Bainimarama, recently said that any dealings with West Papua needed to go through Indonesia, whose sovereignty over the provinces should be respected, other leaders have been less forthright.
At last year's meeting the MSG knocked back an application from West Papua. 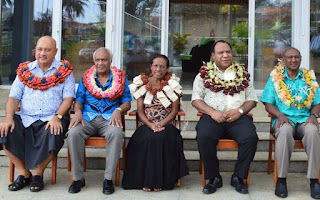 The Solomon Islands Foreign Minister, Milner Tozaka, who will be taking over as chair of the MSG at the July meeting, says the MSG will make a united decision.
"This is a process we have to follow. We can't just make decisions on an ad hoc basis. And Solomon Islands has made a position on the last government, we have not made a statement yet, we are following up that decision that they made. And if there is going to be any variation, we need to talk about it in the coming meeting."
Ahead of the meeting, the Governor of Oro Province in PNG, Gary Juffa, said the MSG's leadership does not act in a way that represents Melanesian voices, but panders too often to external forces.
Posted by AWPA Sydney News at 1:47 AM