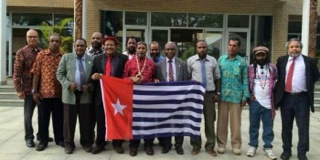 The representatives wakyat West Papua in ULMWP in front of the MSG. Photo: Ist.

"For Fiji and PNG, consider well the application of Melindo," said secretary of KNPB Center, Suhuniap Ones, to majalahselangkah.com through mobile phones, Saturday (06/20/2015) from Jayapura, Papua.

He stated, "Indonesia using the name Melanesia Indonesia to become a full member of the MSG is not appropriate, because Indonesia is not the Melanesian race. So, stop supporting dorang!"

Indonesia claims filed applications representing five provinces, according Ones, is not true because Maluku and North Maluku Melanesia not race.

"The two provinces of Papua and West Papua officially give legitimacy to ULMWP. Therefore, the Prime Minister of PNG and Fiji should consider support for applications Melanesia Indonesia," said Ones.

Further stated, the strength of Southeast Asia in Melanesia Melanesia crush of economic trade, natural resources. Four Melanesian countries is only a small island, while the larger islands are West Papua and PNG, if climate change or global warming, the small islands sink, must save the people of Melanesia in the Pacific.

"Indonesia with all its strength continues to threaten the West Papua to the mission master. If West Papua under Indonesian control, it will be easy to destroy Melanesia. So the PNG and Fiji today should understand that, because it was to save the application ULMWP Melanesia," said Ones.

He explicitly asked to PNG and Fiji did not have to bother with the application of Melindo. "To save the integrity of Melanesia means must accept West Papua became a full member of MSG. Application Melindo only to inhibit West Papua into the MSG, and it is proof of the attitude of colonialism in West Papua," he said.