HTTP://EN.TEMPO.CO/READ/NEWS/2015/06/04/055672081/SMELTER-DEVELOPMENT-PLAN-IN-PAPUA-FACES-STRONG-RESISTANCE
THURSDAY, 04 JUNE, 2015 | 15:50 WIB
2) Smelter Development Plan in Papua Faces Strong Resistance
TEMPO.CO, Papua - The Papua regional government's plan to build a copper smelter faced strong resistance from the Kamoro tribe inhabiting the Paumako sub-district. The villagers believed that the construction of the smelter destroy the tribe's indigenous forest located in the area.
"The forest is our [source of food]," Head of the Kamoro Tribe Assembly Robertus Waraopea toldTempo on Thursday, June 4, 2015.
Robertus argued that both the Papua administration and the central government have never coordinated the smelter construction plan with the people of Kamoro.
Kamoro tribe's land spans 300 kilometers-square wide. The tribe's territory shared its borders with the Kalimana, Asmat, Dogiyai, Deiyai and Paniai districts. On the southern part, the tribe’s land directly borders with the Arafura Sea.
The area planned to be the location of the smelter was said to be located close to the local settlement. "We live five to ten meters away from [the designated area].  It certainly worries us," said Robertus.
People of the Kamoro tribe urged the government to relocate the smelter  to the border of Kaimana District and Mimika District. "Smelter development in the [border of Kaimana District and Mimika District] will open isolated areas and there are roads to get there," Robertus said.
ROBBY IRFANY
------------------------------------------
3) Freedom of Expression under Constant Threat in West Papua
Statement received from the Executive-Director of the LP3BH on 3 June 2015

The LP3BH-Manokwari, a non-governmental organisation that focuses its attention on whether the rule of law prevails in the Land of
Papua, has received a report from the leadership of the KNPB-Sorong (National Committee of West Papua) that they have reason to fear that
some of their activists in Sorong, including the chairman Kantius Heselo and their spokesperson, Agustinus Aud may soon be kidnapped.  They say that a closed meeting was held  between members of BIN, the intelligence agency, BAIS, the strategic agency, and the tribal heads in West Papua on 30 May at 9pm in the Kokosa Complex , Sorong. If their information is correct, efforts are being made to restrict the possibility of ordinary Papuan people  to give expression to their
aspirations that may be in contradiction with the  views of the state apparatus and the Indonesian Government.

As is widely known, freedom of expression and freedom of opinion are clearly guaranteed  in Law 12/2005 on the Ratification of the
International Covenant on Civil and Political Rights. Moreover, this Covenant has been incorporated into Indonesian law by virtue of Law 30/1999 on Basic Human Rights.

The LP3BH calls on the Government of the Republic of Indonesia under the leadership of President Ir. H.Joko Widodo, to safeguard
unrestricted access for the people of West Papua to give expression to their political aspirations, whether or not they differ from those in
power, in accordance with the principles of human rights that are recognised across the world.

Such expression of aspirations can be channelled  via the intermediary of formal channels such as through local parliaments or
through the MRP (Council of the Papuan People) or various relevant governing agencies.

The systematic efforts  being made by the government by means of the security forces such as the TNI (Indonesian Army), Polri
(Indonesian Police Force) or such agencies as BAIS to intimidate Papuan people and prohibit them from engaging in political activities
which has been going on for decades and up to the present day, can only worsen Indonesia's reputation in the international community if it continues to restrict freedom of expression which is guaranteed by countries across the world and have moreover been officially adopted here in Indonesia.
Peace!
Yan Christian Warinussy, Executive-Director of the LP3BH - the
Institution of Research, Analyzing and Development for Legal
Aid-Manokwari.
Translated by Carmel Budiardjo
----------------------------------------------------------------
A google translate of article in majalahselangkah.com. Be-aware google translate can be a bit erratic.
Original bahasa link above article.
http://majalahselangkah.com/content/posko-dukungan-ulmwpjadi-anggota-msg-digelar-di-jayapura
4) Member Support Command Post ULMWP So MSG Held in Jayapura
Author: Theresia Francisca Tekege | Thursday, June 4, 2015 21:48 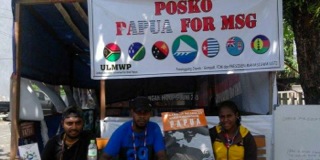 ULMWP itself was born in Vanuatu, at a symposium leaders of the struggle for independence of West Papua last 1-6 December 2014, and gave birth to the Declaration as a result Saralana (Read: This manuscript Declaration of Unity West Papua in Vanuatu).

Form of support with his signature. The focus of the mass base is Papuan students in all universities in Jayapura and the surrounding areas. The support posts held in the Auditorium at Uncen, began yesterday, Wednesday (06/03/2015).

Samuel Womsiwor, secretary general of the uproar said, students are required to support ULMWP as representatives of the people of West Papua to re-gather together the countries of Melanesia.

Womsiwor asked for the involvement of all students Papua in Jayapura and sektiarnya together to stand with the people's support representatives, ULMWP MSG forum.

"This post was also established to ask for the involvement of all students Papuan student in the city of Jayapura study to come to this post to provide support," said Womsiwor. "Let's come to the post and the signature of our support for Papua enter MSG in our family because it was time to be united in a single Papua Melanesian family," he continued.

Earlier, during the month of May 2015, majalahselangkah.com record, there were 474 civilian Papuan activists were arrested by Indonesian security forces (Read: During May 2015, 474 people in Papua Arrested).

"The three activists are still Hold Police Kaimana to date. They were detained while trying to conduct a peaceful protest at the Parliament office Kaiman in terms of support for the Papuan People in West Papua ULMWP bring applications to MSG. On Thursday, June 4th, 2015," the release KNPB and the PRD region Kaimana received majalahselangkah.com.

From the front of the secretariat KNPB / PRD region Kaimana, ditangkaplah 3 activists earlier.

"Our continued support will continue with all of the way. Last time we were demonstrations, we currently worship at the secretariat. Support our citizens more and more. This is evidence of how the people of Papua want ULMWP accepted as a permanent member of the MSG," said the source majalahselangkah.com this afternoon.

"We pray for the states of the member states of MSG for the Spirit of God to help to clump melanesia. We believe, receive God's help ULMWP become an official member of MSG," the source said. (Princess Papua / MS)
Posted by AWPA Sydney News at 1:42 PM