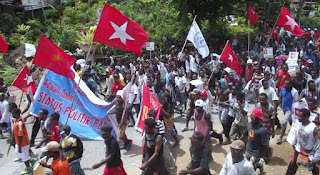 KNPB while held a rally in Timika – Suplied
tabloidjubi.com | West Papua Daily
Jayapura, Jubi – The West Papua National Committee said it fully supported three main issues put forward by the Pacific Islands Forum Secretariat at a leaders’ meeting to be held in Papua New Guinea next month.
“We made a statement to indicate our support. We support Papua to join MSG and Papua issues in PIF leaders meeting,” the Secretary of Central KNPB Ones Suheniap said in Waena, Jayapura on last weekend.
He said of the three issues driven, KNPB is more concerned with the issue of decolonialization. Papua’s status of observer obtained in MSG Summit in Honiara last month has proved Papua as a nation, which should prepare itself to become an independent nation.
He further said KNPB earlier also stated its rejection against some national and international companies in Papua since those companies have triggered a number of human right violations in Papua. “It’s time to fight the American and Indonesian capitalism in Papua,” he said.
Meanwhile, Secretary General of the Pacific Islands Forum, Dame Meg Taylor on phone conversation to Jubi on Saturday (8/8/2015) said the PIF Secretariat had three recommendations submitted by several civil society coalitions at Pacific Region. The recommendation would be discussed on next week in the Committee Forum held at Suva, Fiji.
She told the Pacific leaders would be asked to consider the situation in West Papua and openly to express their concern on human right violations as well as to enforce the settlement of differences between the parties in peace.
“Three agendas that possibly would be recommended are including the fact-finding mission to West Papua consist of the ministers of Pacific countries, encouraging West Papua to get into the list of decolonization and providing a sanction to the Indonesian private and State companies that are proven doing the human right violations,” Dame Taylor said. (Mawel Benny/rom)

Jayapura (ANTARA News) - The Papua provincial government will invite representatives from Papua New Guinea to attend Indonesias 70th Independence Day celebrations."The presence of foreign countries will be confirmed on August 15-16," Papuas assistant for Economic Affairs and Social Welfare, Elia Loupatty, stated here on Monday."We hope that foreign countries, especially those close to Indonesia, can attend the celebrations. Their presence will be confirmed next week," she noted.According to Loupatty, a simple ceremony will be organized to celebrate the 70th Independence Day of Indonesia."Panjat pinang (greasy-pole climbing), marathon race, and art and cultural competitions will be held to commemorate the event," she pointed out.Loupatty stated that the local administration will hold competitions of traditional sports, including a decorative boat event."However, the local government is also concerned about the traffic arising due to the crowds congregating for sacred contemplation at the Trikora Heroes Cemetery and for the commemoration ceremony for Indonesias proclamation of independence at the Mandala Stadium, Jayapura," she remarked.She noted that military, police, and community groups will attend the commemoration ceremony.(Uu.A063/INE/KR-BSR/O001)

August 10, 2015 tabloidjubi.com
Timika, Jubi – Twelve foreign-flag ships are still harboring at Mimika waters to wait for a decision whether to resume operations or to be deported to their home countries after the moratorium.
“So, we are waiting for the regulation or instruction from the Central Government when those ships could resume their operations or be deported,” the Head of Mimika Marine and Fisheries Office, Ir. Ignatius Eddy Santoso, M.Si said in Timika on last week.
This is a consequence of regulation issued by the Minister of Marine and Fisheries to extend the moratorium of permit of former foreign-flag ship for six months after the issuance of moratorium until next October. “Since the twelve foreign ships have no activities, the ship crews have been sent home while waiting for regulation from the central,” he said.
He further declared the operation permit for foreign-flag ship in Mimika region was issued by the Provincial Government instead of Regional Government. “The Regional Government is not authorized to issue permit for those ships. They have a permit from the Provincial Government,” he said.
According to him, the minister’s policy on moratorium of foreign-flag ship and transshipment applied since October 2014 is regarded a positive influence on Indonesian fisheries sector, especially in Mimika.
However, in the term of supply, fish supplies for local market are decreasing due to the lack of the ships. Therefore, the local marine and fisheries office made arrangement with distributor to bring the fishes from outside of Mimika region, such as Kamimana and Tual. “Moratorium has impact to the community, that it helps the local community. But it also caused the lack of fish supplies in Timika,” he explained.
Meanwhile, the extension of ship moratorium is restricted in the Regulation of the Minister of Marine and Fisheries No.10/PERMEN-KP/2015 on the Amendment of the Regulation of the Minister of Marine and Fisheries No. 56/PERMEN-KP/2014 about the Moratorium of Commercial Fisheries Permit in Marine Management Area of the Republic of Indonesia.
The only change of the regulation is mentioned in the Article 3 in which regulates the validity period of the previous moratorium that only valid until 30 April 2015. While the new regulation signed by the Minister of Marine and Fisheries Susi Pudjiastuti on 23 April 2015 said the moratorium would extend until October 2015 due to extra time needed for verification towards the former foreign-flag ships. (Eveerth/rom)
————————————————————
6) The Statement by the Police Force in West Papua does not comply with the law
The statement made by J.H. Sitorus, head of public relations of the West Papua Police, as reported in the media in response to theaspirations of the Papuan people is very narrow-minded and is not in accordance with the law.   I say this because the statement is very sceptical and narrow-minded in its failure to  understand the true significance ofLaw 21/2001 on Special Autonomy for the Province of Papua, as amended in Law 35/2008 which makes that same stipulation applicable also tothe Province of West Papua.   I should like to point out that Article 48 of Law 21/2001 clearly states that the replacement and appointment of  the Chief of Police inPapua and also in West Papua is the responsibility of the governors of the two provinces above-mentioned (see article 48, para 5).   This is because in the implementation of their respective duties the afore-mentioned officials are accountable to the two governors inthe Land of Papua. This is because matters of security should always be answerable  to those who are responsible for these matters whilethere should always be co-ordination  between the two chiefs of police.    As for the aspirations of the Papuan people as expressed through their organisations and their leaders with regard to everythingregarding the indigenous Papuan people, this should be in accordance with the provisions of these laws on autonomy, with which officialslike the aforesaid Sitorus who is not an indigenous Papuan should comply.  The opportunity for an indigenous Papuan to occupy a leading position in the police force has now been granted to Brigadier-GeneralDrs Paulus Waterpauw, the Chief of Police of Papua and now also of West Papua.   Certainly the indigenous Papua people note that besides Waterpauw, there are also several middle-ranking police officers who are likelyto get the opportunity to occupy these positions when they become vacant.  These officials should make known their views in the printand electronic media in Manokwari and West Papua which should be acknowledged and respected by all police officers, including MrSitorus.  The fact is that the chief of police in West Papua, Brigadier General Royke Lumowa, has no understanding whatsoever of theaspirations of the Papuan people; according to information we have received, the aforementioned officer has been conveying his views toseveral leaders of the community in Manokwari.   In my opinion, the provisions of the police force  in the Land ofPapua  following the enactment of the Autonomy Law in 2001, it should now be properly implemented, not only by stakeholders such as thegovernors and the members of the legislative assemblies in Papua and West Papua. This means that there should immediately be the properimplementation of article 48, para (3) according to which regional provinces should issue regulations regarding the duties of the policeforce in the Land of Papua, with regard to public order and security and their financing, in order to end the anxieties being felt by thePapuan people.  This is a matter of great importance which appears not to have been understood by officers who are now  working in the Land of Papua,including Mr Sitorus. The result is that they frequently say things without having any basis in the law, in recognition of the fact thatthe provinces of Papua and West Papua are special regions, as recognised in accordance with the Constitution of Indonesia.--------Statement by Yan Christian Warinussy, Executive Director of the LP3BH
- The Institution of Research, Anayzing and Development for Legal Aid.8th August, 2015Translated by Carmel Budiardjo, recipient of Right Livelihood Award 1995.
——————————————————-
Posted by AWPA Sydney News at 1:40 PM