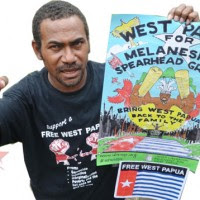 DEAR Pacific Island Forum leaders,
We are writing to you at a critical juncture for the people of West Papua and           regional recognition of their struggle to end human rights violations in their land.
We call on you to extend your support by prioritising the human rights issues in    West Papua at the 46th Pacific Island Forum (PIF) meeting to be held in  September 2015 in Papua New Guinea.

We urge you to advance the gains made at the recent Melanesian Spearhead  Group (MSG) Leaders Summit in Honiara, July 2015, where the historic decision was made to grant the United Liberation Movement for West Papua (ULMWP) Observer status in the MSG.

Ongoing Human Rights Violations
International and Indonesian human rights groups have regularly documented violence in West Papua, including the extensive use of intimidation, torture, sexual violence, beatings and killings by the security forces.
The United States State Department 2014 Human Rights report on Indonesia exposes and condemns gross and persistent human rights violations by the Indonesian authorities in West Papua.
Throughout last year, there were harsh crackdowns on numerous peaceful rallies.
All sectors of society in West Papua including lawyers, human rights defenders, activists, clergy and journalists faced regular intimidation or the threat of arrest.
The year ended with a shocking massacre of four school boys when on 8 December 2014 security forces fired into a crowd of approximately 800 peaceful demonstrators (including women and children) in Enarotali in the Panai regency.
Despite international media coverage the perpetrators have not been brought to justice.
This reality is all the more grim when one considers the fact that violent crimes committed by police and security forces are rarely punished.
Indonesia is failing to address serious concerns regarding impunity for security forces.
Amnesty International states: “Impunity for human rights violations is commonplace. Accountability mechanisms to deal with police abuse remain weak, and reports of torture by members of the security forces often go unchecked and unpunished.”
Political prisoners languish in jail in West Papua for nothing more than raising the Papuan Morning Star flag or taking part in peaceful events.
In August 2013, four leaders were arrested at a solidarity event in West Papua that included a prayer meeting and the display of the Morning Star, Aboriginal, and Torres Straits flags inside a church.
On 1 May 2015 over 260 West Papuans were arrested by security forces for simply taking part in peaceful rallies in contravention of their right to freedom of expression and assembly.
They were commemorating the 52nd anniversary of the administrative transfer of West Papua to Indonesia.
West Papua is currently off limits to international journalists.
Foreign journalists trying to report on West Papua have been arrested, deported and even imprisoned.
While Indonesia's president Joko Widodo announced the end of the decades-long restriction on foreign journalists reporting on West Papua during a visit in May 2015, the President’s assurance has already been cast into doubt by contradictory statements made by members of his administration stating that foreign journalists would still have to apply for permits and would be subjected to screening.
During the same visit to West Papua Indonesian President Joko Widodo announced the release of five political prisoners, under ‘clemency provisions’ which require them to admit guilt for their past actions.
If the release of the five prisoners is to be seen as genuine progress, it must be followed by an increase in the rights and democratic freedoms of the Papuan people.
Unfortunately there are signs that the opposite is happening.

Indonesia’s Development Policy
Indigenous West Papuans are now a minority in their land.
From a large majority (96.09%) of the population in 1971, projected population figures for 2020 place West Papuans at 28.99% of the population, highlighting a rapidly changing demographic.
The Indonesian government’s policy to accelerate development in West Papua policy is unlikely to bring peace or development.
It is, in fact, likely worsening the human rights situation in West Papua and further marginalising West Papuan people economically, socially, politically and culturally.
West Papuans must contend with the exploitation of their rich timber and mineral resources for which they receive little benefit.
Large-scale mining and deforestation are causing massive social dislocation, devastation of rainforests and pollution of streams and rivers which people depend on to survive.
The United National Committee on the Elimination of Racial Discrimination has written to the Indonesian government to express concern about the impacts of the planned large-scale Merauke Integrated Food and Energy Estate (MIFEE) project, which involves the conversion of a vast area of land, including forests, into plantations growing food, energy and other crops, on the indigenous peoples affected by this agro-industrial mega-project.

Role of the Pacific Island Forum
West Papua has always been considered part of the Pacific Community. Netherlands New Guinea, as West Papua used to be known, was a member of the South Pacific Commission (SPC), a forerunner of the PIF.
West Papuans attended the SPC meetings until the Netherlands ceded its authority to the United Nations Temporary Executive Authority in 1962.
From the time Indonesia took control of the territory in 1963, West Papua has been excluded from regional meetings.
West Papuan leaders are turned down when they ask for observer status, but Indonesia is accepted as a ‘dialogue partner’
However, some of the most significant efforts to inspire action to end human rights violations in West Papua have come from countries in the South Pacific region.
Leaders of Nauru and Vanuatu spoke in support of self-determination for West Papua at the UN Millennium Summit in New York.
Nauru also invited West Papuan representatives to be part of the official Nauru delegation at the 2000 PIF summit in Kiribati.
Then president of Nauru, Mr Bernard Dowiyogo, declared, “[I]f the Forum is to continue to be relevant then it must confront such issues which are important to the lives and democratic rights of the people of our region.”
Subsequent PIF meetings have included expressions of concern about the human rights situation in West Papua.
However, in recent years the PIF has dropped the human rights situation in West Papua from its agenda and West Papua has not been mentioned in the official PIF Communiqué.
Now, after over 53 years of political struggle for the right to self-determination, the ULMWP—the unified and recognised coordinating body representing West Papua with support throughout Tanah Papua—was granted Observer status by the 20th MSG Leaders summit in Honiara.
It is noted that the Solomon Islands Prime Minister Manasseh Sogavare, as chair of the Summit, played a significant role in ensuring this historic decision was made.
This political recognition provides opportunity for West Papua to participate in regional dialogue with Indonesia for the first time in history.
It is clear that this step was achieved through the increasing support from the people of the Melanesian countries, as well as those in the wider Pacific region and beyond.
Currently, West Papuan leaders are committed to non-violent means to achieve their aspirations and to resolve problems and grievances.
The PIF has proven itself to be an effective regional advocate. The forum—whose mandate is to promote regional stability—has a responsibility to help resolve this longstanding Pacific conflict.
It is incumbent on the PIF to take substantive action. Specifically, we urge the leaders of the 46th PIF summit to:
We thank you in advance for acknowledging the rights and aspirations of the people of West Papua as a priority issue.
_____________________
travel NY Times
2) In Papua, Indonesia, a Visit to the Welcoming Dani People
AUG. 6, 2015
The thatched-roof homes of Wesagalep lay at cloud level, high above the Baliem Valley in Papua, the Indonesian side of the island of New Guinea. They are built on about six terraced levels of the mountain, with startling views of the valley and down to the rushing river below……………………….
http://www.nytimes.com/2015/08/06/travel/papua-indonesia-frugal-traveler.html?_r=0
Posted by AWPA Sydney News at 2:41 PM