1) Australian PM urged to talk to Jokowi about Papua 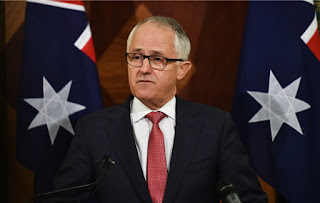 There are calls for Australia's prime minister Malcolm Turnbull to raise the matter of human rights abuses in West Papua with his Indonesian counterpart.
Mr Turnbull is due to meet Joko Widodo for talks tomorrow in Jakarta.
The United Liberation Movement for West Papua has called on Mr Turnbull to discuss violence by security forces aganst West Papuans.
The ULMWP says that since President Jokowi signalled his intention for a peaceful solution to the West Papua problem, Australia's government should be proactive about being part of this solution.
Meanwhile, the Australia West Papua Association has written to Mr Turnbull urging him to raise issues such as the crackdown on peaceful civil society groups, intimidation of journalists and the killing of civilians including school children by Indonesian security forces.
Echoing the ULMWP, the AWPA is asking for Canberra's support for the request from Pacific Islands Forum leaders to Jakarta to allow a Forum fact-finding mission to West Papua.
The talks between Australia and Indonesia's leaders represent an opportunity to repair the bilateral relationship after damages sustained during Tony Abbott's tenure as Australian prime minister.
However, Mr Turnbull is widely expected to maintain his predeccesor's stand of not questioning Jakarta on Papua issues.
The new Australian prime minister, responding to a recent ULMWP letter, indicated that his government would prioritise economic interests over support to reinscribe West Papua on the UN list of territories to be decolonised.
——————————————————————————————————-
http://tabloidjubi.com/eng/regent-urged-to-protect-papuan-women-traders/
2) REGENT URGED TO PROTECT PAPUAN WOMEN TRADERS
Victor MamborNov 10, 2015Indigenous Peoples Of Papua0

Updated at 5:02 pm today
Human Rights Watch says Indonesia's new policy on foreign media access to West Papua has had mixed results.
It's six months since President Joko Widodo announced that restrictions on foreign journalists visiting Papua were being lifted.
While a handful of foreign journalists have visited, HRW says there is extremely uneven implementation of Jokowi's policy.
HRW Asia's deputy director Phelim Kine says that within elements of Indonesia's government and security forces, there remains severe resistance to allowing access to Papua.
"It's going to be a long-term process to bring those elements of the government and security agencies who have implemented these restrictions over more than a quarter of a century to step back and to allow foreign media to actually allow foreign media to actually have that unimpeded access that President Joko Widodo - to his credit - has announced should be the case."
Phelim Kine says foreign NGOs, UN rights experts and academics remain restricted from visiting Papua.
HRW is today releasing a new report, "Something to Hide? Indonesia’s Restrictions on Media Freedom and Rights Monitoring in Papua", which also documents regular self-censorship by journalists based in Papua and the security forces' manipulation of local media outlets.
—————————————————————
http://tabloidjubi.com/eng/papua-and-wetar-island-to-be-destinations-of-2016-lipi-expedition/
5) PAPUA AND WETAR ISLAND TO BE DESTINATIONS OF 2016 LIPI EXPEDITION
Victor MamborNov 10, 2015Infrastructure0
Jakarta, Jubi – Wetar Island which is the outermost islands in the southwest Maluku and Papua will be the destinations of the Widya Nusantara Expedition (Ewin) in 2016, said the deputy for Life Sciences (IPH) Indonesian Institute of Sciences (LIPI), Enny Sudarmonowati.
“Next year we are going to the outer islands of Indonesia, Wetar Island, and Papua” said Enny in Jakarta on last week.
The expedition will be much more expensive than the previous one in Enggano, Bengkulu. Therefore, cooperation between deputies LIPI will be further strengthened from the beginning, so that the funds collected could be far greater.“Do not let the foreigners first that reveals what is in there,” she said.
LIPI committed to supporting the development of the eastern region of Indonesia. Therefore, Papua also will be a destination expedition researchers of LIPI in 2016.“We definitely will visit Papua. There is a biological garden in Wamena who want to be upgraded to the botanical gardens. Hopefully, the Ministry of Public Works could soon build the infrastructure, so it can be connected to Lorentz national park “she added.
Wetar island has an area reached 3,600 square kilometers, is located in Southwest Maluku. It became one of the foremost islands because it borders with Timor Leste in the south.
Previously chairman of economic research network of Eastern Indonesia, Izzac Matitaputty, said the size is larger than the other islands in the archipelago there. Wetar better suited to be duty-free port.
He believes the duty-free port will not only open the door isolated outer islands but also will accelerate the economic development of communities in Southwest Maluku far from Ambon. (*)
—————————————————————
http://tabloidjubi.com/eng/papua-need-additional-hundreds-of-megawatts-of-electricity-for-national-games/
6) PAPUA NEED ADDITIONAL HUNDREDS OF MEGAWATTS OF ELECTRICITY FOR NATIONAL GAMES
Victor MamborNov 10, 2015Infrastructure0
Jayapura, Jubi – The National Sports Games (PON) XX to be held in Papua need extra electricity of hundreds of megawatts (MW).
Chairman deputy of the Infrastructure Committee (PB) PON Papua in 2020, Markus Boy Dawir said, it takes the additional electrical power for five clusters such as in Jayapura, Biak, Mimika, Wamena and Merauke.
He said, in Jayapura city, the available power is now only 27 MW while PON needs at least 100 MW. Likewise in Mimika, it takes 100 MW while Merauke, Wamena and Biak, at least 50 MW.“In Jayapura city, the operation of power plant is expected in Holtekham, Jayapura city and hydro power in Grimenawa, Jayapura regency. If the power plant is already functioned, there may already be less than 70 MW,” said Boy Dawir last week.
Meanwhile, in Merauke electric power is now only 17 MW. For the needs of society, the power was insufficient. Not to mention when it was built several venues. But the Merauke district government expressed readiness to grant 10 hectares of land to the PLN for the construction of power generating capacity of 50 MW.“In Biak available power is now only 14 MW and to be added up to 50 MW. We ask Merauke regency to immediately make land certificate to be donated to the PLN to fiscal year 2016 for power plants,” he said.
He said there will be a meeting with the heads of regions and six regional parliaments namely are DPRD of Biak, Mimika, Wamena and Merauke to discuss development budget of PON facilities in each cluster.
The same thing is said to be a member of Commission IV Thomas Sondegau. He said, need additional power, especially in Jayapura, as it will be built stadiums of international standard. (Arjuna Pademme)
————————————————————
Posted by AWPA Sydney News at 11:18 PM