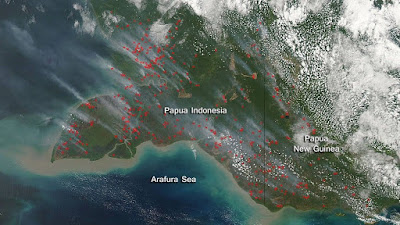 1) Palm oil’s new frontier is the vast rarest covering the world’s second-largest island
WRITTEN BY  Steve Mollman @stevemollman
October 26, 2015
Think of New Guinea and images of hilly jungles, winding rivers, and isolated tribal cultures might come to mind. What probably doesn’t: palm oil plantations. But maybe it’s time that they should.
Indonesia is already the world’s leading producer of palm oil, primarily from operations on Sumatra and Borneo. A key driver of economic growth, those operations have come into focus recently
because of the fires—many set to cheaply clear land for palm oil and pulp-and-paper plantations—that have cast a persistent toxic haze over a large part of Southeast Asia, including Singapore,
Malaysia, and southern Thailand. The pollution has led to respiratory problems, closed schools, and cancelled flights and events across the region.
Indonesia itself has the worst-hit areas. Its disaster management agency recently reported that the haze has caused acute respiratory infections in more than half a million people, and killed 10. Earlier this month the
health agency of Palembang, Sumatra’s second-largest city, reported 19 infants had received treatment for the same condition, with one passing away. The government has announced plans for evacuation by warship to
less polluted areas, with rains not expected before the end of November, thanks to the El Niño weather phenomenon.
The fires are “the biggest environmental crime of the 21st century,” wrote Erik Meijaard, who coordinates the environmental research initiative Borneo Futures, in the Jakarta Globe. Yet, he noted, “the government
still hasn’t recognized how serious the problem is.” For the 11 million people living on New Guinea, what’s happening on Sumatra and Borneo might be a glimpse into their own future. Indonesia’s loosely regulated
palm oil industry sees the island as the next frontier, and a key to reaching the goal of producing 40 million metric tons by 2020, up from a projected 31.5 this year.

Reaching that goal will require lots of suitable land—an additional 12 million hectares or so. New Guinea has an ideal climate and is the world’s largest island after Greenland (Australia is classified as a continent, not an island). Indonesia claims the western half, which is occupied by its provinces Papua and the smaller West Papua. The nation of Papua New Guinea has the island’s eastern side. Palm oil producers are expanding there too, but there has been greater pushbackfrom activists.
Besides hundreds of different tribes, New Guinea is home to incredible natural beauty and biodiversity, including the planet’s tallest tropical trees, biggest butterflies, longest lizards, and smallest parrots. The world has six species of tree-climbing kangaroos, and they’re all endemic to New Guinea. Scientists often discover previously unknown species on the island, including among reptiles, mammals, and plants.
Tree kangaroos.(Tim Williams via Flickr/CC-BY-2.0)
A scene from the Sentani Lake Festival in the Papua province.(Reuters/Oka Barta Daud)


Some forest areas on the Indonesian side of the island are officially protected from development. But the government has arbitrarily “de-protected” such areas in the past, Greenpeace has noted, including through a mandate (pdf) a few years ago.
The growth of the palm oil industry on Indonesia’s side has been swift, and that growth looks set to accelerate. A decade ago five palm oil plantations operated in West Papua, and by the end of last year there were more than 20. By March another 20 concessions were at the advanced stages of the permit process, with many more at the early stages. If all were developed, these plantations would occupy more than 2.6 million hectares of land, most of which are now tropical forest. The larger Papua province—holding 5.7 million hectares of forest land deemed suitable for oil palm—is seen as even more central to meeting Indonesia’s production goals.
Harvesting oil palms in the Papua province.(Reuters/Oka Barta)
From Oct. 9 to Oct. 16, a particularly strong cluster of fires could be seen via satellite in the southeast corner of Papua province, according to Global Forest Watch. Most of those were in the Merauke regency, where the palm oil industry has a strong foothold.
High-confidence fires during the period of Oct. 9 to Oct. 16, 2015, in the Papua and West Papua provinces.(Global Forest Watch/NASA)To be sure, other commodities-based industries have also taken an environmental toll on New Guinea, including logging and mining, and often without sufficient benefit to local people (many of whom want , which they accuse of being exploitative). And other agricultural crops besides oil palms are being planted where forests used to be; indeed, the rate of Indonesia’s deforestation has surpassed Brazil’s.
But as on Sumatra and Borneo, with Indonesia’s palm oil industry comes increased deforestation and land-clearing fires producing huge amounts of smoke. Who sets the fires is usually a bit hazy, but typically more and more land is cleared and eventually taken over by neatly ordered rows of oil palms.
Far from seeing the destruction as a major concern, Indonesia’s government has defended deforestation on economic grounds, despite the activity making the archipelago nation—which has many low-lying areas, including much of the capital Jakarta—a major contributor to global warming and thus rising sea levels.
This month Indonesia announced its intention to form a palm oil cartel with Malaysia. The Council of Palm Oil Producer Countries would allow the two nations, which produce about 85% of the world’s production, to set their own environmental standards (or maintain the status quo), rather than being pressured into stricter “no deforestation” standards.
The smoke arising from Papua in the past few months has been noticeable enough from space to catch the attention of NASA, which captured the image atop with its Aqua satellite. The smoke over Papua and West Papua can’t yet compare to that seen on Borneo and Sumatra, where the palm oil industry has had longer to take hold, but it’s recently been strong enough to force flight cancellations and cast a haze in Sulawesi and as far away as Guam, a US territory more than 2,100 kilometers (1,300 miles) across the Pacific.
—————————————————————
http://tabloidjubi.com/eng/im-committed-to-west-papuas-plight-pm-sogavare/
2) I’M COMMITTED TO WEST PAPUA’S PLIGHT : PM SOGAVARE
Victor MamborNov 04, 2015Pasific News0
Jayapura, Jubi/SIBC – Prime Minister Manasseh Sogavare assures a visiting West Papuan delegation of his determination as Chair of the Melanesian Spearhead Group (MSG) to continue the push for West Papua’s freedom from all forms of human rights abuses and oppression in that region.
A government statement today says Mr Sogavare made the assurance during a courtesy meeting with a visiting eight-member West Papuan delegation in his capacity as Chair of the MSG.
Prime Minster Sogavare made the assurance to the delegation as MSG is founded on decisions and principles of tolerance and human rights.
Mr Sogavare assured them he will ensure the issue is dealt with properly during his Chairmanship as he is also aware many Melanesians have supported the West Papuan struggle against forced oppression.
Meanwhile in their response, the visiting delegation thanked the Prime Minister for his bold stand as a Melanesian leader to push for West Papua’s admission as an Observer of MSG during its meeting in June this year.
The members described Mr. Sogavare as a “shining” example of firm leadership not only in Melanesia but internationally, for his courageous decisions and ongoing support to ensure human rights abuses and the oppression of West Papuans is stopped.
The West Papuan delegation consists of representatives from the West Papuan political leadership, civil society, NGOs, churches and academics. (*)
———————————————————————
http://www.radionz.co.nz/international/programmes/datelinepacific/audio/201777360/jakarta-urged-to-release-all-papuan-political-prisoners

A West Papuan activist is calling for the Indonesian government to free all Papuan political prisoners.
The Indonesian president Joko Widodo in May freed a handful of prisoners from Abepura prison.
But the prominent Papuan political prisoner, Filep Karma, refused an offer of remission, saying he was not interested in accepting any arrangement where he admits guilt for a crime he didn't commit.
Filep Karma is serving a 15 year jail term for for treason after he raised the banned Papuan Morning Star flag in 2004.
Indonesia's Political, Law and Security Minister, Luhut Binsar Pandjaitan, recently said Karma was wrongly convicted of treason, or makar, which implies inciting armed revolt.
According to the online political prisoner database Papuans Behind Bars, 47 political prisoners are currently detained in West Papua.

TEMPO.CO, Jakarta - The draft presidential regulation that would extend the powers of the Indonesian Military (TNI) is a dangerous step backwards. The document being discussed by the defense ministry and TNI headquarters clearly intends to restore the TNI's role in maintaining public order and security, which is now the job of the police.
If this proposal moves forward, it will be a betrayal of the reform movement. In 1998, the TNI's dual function as defender of the nation's sovereignty and holder of the authority to preserve order came to an end. Today, the military deals with threats to national sovereignty, while the police deal with disturbances and crimes in the civilian sphere.
It is highly regrettable that articles in the draft regulation to expand the authority of the TNI provide a legal basis for the TNI to be involved in non-military threats, such as operations to stop smuggling or to eradicate illegal drugs. Law No. 3/2002 on National Defense states that the TNI is the defense apparatus of the state. But articles 4, 5 and 6 in the draft presidential regulation proposing the TNI's new role, the military would no longer be simply the state's defense apparatus, it will also play a role in internal security.
The addition of the word "security" in the draft is vague and the meaning unclear. Most likely, the additional clause is intended to provide the TNI with the legitimacy to carry out additional non-police duties. It seeks to empower the military not just to deal with crimes such as smuggling or drug dealing, but also with managing demonstrations by students, laborers, farmers, just like in the past. During the New Order era, the TNI took part in resolving the Kedung Ombo Reservoir protests, the murder of labor activist Marsinah and the Badega Garut land case, using the 'rifle butt' approach.
The expansion of the military's role outside the combat arena would clearly be a step backward. Its functional role as the state's defense apparatus would be undermined, making it much less efficient than the armies of neighboring countries. The military's skills would be compromised by having to deal with the 'additional activities'.
Instead, the defense ministry should pay more attention to developing the professionalism of combat personnel and upgrading their equipment. The 'no day without training' program, in line with the slogan of Defense Minister Ryamizard Ryacudu when he was Army chief of staff, should be a priority. The TNI could conduct training with friendly nations. Furthermore, military personnel need to study the 'wars of the future', which will no longer depend on human-based defense. The TNI's most important job is to realize the principle of si vis pacem, para bellum - to attain peace, be prepared for war.
Improvements to the professionalism of its personnel should be higher priority than, for example, the national defense program, recently launched by the defense ministry. Besides being open to interpretation as a militarization of civil society, the national defense program would reduce scarce available funds to fight poverty and unemployment or other social programs.
Surprisingly, how this anachronistic proposal went past all the usual hurdles to end up so effortlessly on President Joko Widodo's desk is a big question. Legally, the draft presidential regulation may be problematic because it contradicts Law No. 3/2002. Jokowi must not go ahead with this regulation to expand the TNI's authority. Indonesia must not go back to the era of Praetorian Rome, some 2,000 years back, when the army was the state's defense apparatus, its police force and ultimately, its political power. (*)
-------------------------------
Posted by AWPA Sydney News at 12:36 PM