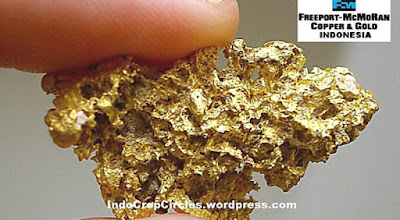 Gold in Freeport Indonesia mining area – Suplied
Jayapura, Jubi – PT Freeport Indonesia denied allegations by the Minister of Maritime Rizal Ramly that it pays a small royalty to the Indonesian government.
As one of third larger gold and copper company in the world operating in Papua, PT Freeport Indonesia was accused raking in huge profit, while Papua indigenous around the mining areas are living under poverty. The Minister Ramli accused PTFI only pay 1 percent of royalty for gold exploitation on the Amungsa land.
But the company’s spokesperson Riza Pratama denied the allegation, saying that the company has increased the royalty for copper, gold and silver since 2014.“In line with the renegotiation of the Contract of Work, since July 2014, PTFI has increased the amount of royalty for copper, gold and silver respectively from 3.5%, 1% and 1% to 4%, 3.75% and 3.25%,” Riza said.
During the time it was estimated that PTFI has produced 40.9 tons of gold per year. If the price of a gram of gold is Rp 300 thousand so 40.9 tons equals with Rp 12.3 trillion per year. 1 percent of the company’s gross income is Rp 123 billion, it’s excluding the copper and silver.
Based on Freeport’s data, the stock of gold in DOZ (Deep Ore Zone), Deep MLZ, Big Gossan, Grasberg Bloc Cave and Wild Cat mining areas is recognized 67 million ounce or approximately 1.899 tons (1 ounce = 28.35 gram). PTFI plans to work on these gold mining till 2042. Refer to the price of Rp 300 thousand/gram, PTFI has earned Rp 569.7 trillion from the gold stocks during its operation in Papua.
Because of since 1967 to 2014, Freeport only paid 1 percent of royalty to the government, including the indigenous Papuans around the mining from its profit, the government asked for the increment to 7 percent. “We (the government) asked Freeport to pay 6 to 7 percent royalty,” said Rizal Ramli during his presentation at the Indonesian House of Council in the mid October. (Victor Mambor/rom)
————————————————
http://tabloidjubi.com/eng/kangaroo-population-declines-at-wasur-national-park/
2) KANGAROO POPULATION DECLINES AT WASUR NATIONAL PARK
Victor MamborNov 03, 2015Environment0
Merauke, Jubi – Illegal hunting activities within the 430,000-hectare Wasur National Park threatened the population of animals, especially kangaroos, a park official told Jubi on Monday (2/11/2015).
Syaiful said a few years ago, people’s presence attracted kangaroos, but now the animals are afraid of humans.
However, Syaiful did not give an estimate on the remaining population kangaroos in the Wasur National Park, since recalculation is needed.
But its population is still founded, and according to calculation, a kangaroo could be seen in a hectare.“The number is relatively small compared to few years ago,” he said.
As explained, the hunting activities could be involved the local community living in the area of Wasur National Park who traditionally are landowners due to the special privilege given. About the outsiders, Syaiful admitted he met the outsiders go hunting a few years ago but he doesn’t know recently.
Meanwhile the Head of Wasur National Park, Anggoro admitted the Wasur National Park is the nest of many species such as birds, kangaroo and other wilds. Particularly for the birds, the number is growing due to birds’ migration from other countries including Australia. And for cenderawasih (bird of paradise), its population is growing. “Yes, but I have not received a detail report on cenderawasih species in the Wasur National Park,” he said. (Frans L Kobun/rom)
—————————————————————-
http://tabloidjubi.com/eng/jayawijaya-residents-urge-government-to-stabilize-fuel-prices/

Victor MamborNov 03, 2015Economy0
Wamena, Jubi – Fuel shortages including gasoline, diesel and kerosene and high prices of basic commodities in Jayawijaya have sparked a public protest in Papua Highlands.
Motorcycle taxi drivers and supporters held rally in front of the local parliament office on Monday (2/11/2015), urging the local parliament and Jayawijaya Regional Government to stabilize the ‘choking’ prices that have lasted for few last days.
The Coordinator of Protest, Muli Wetipo, said the shortages of fuel and basic commodities often occur in Jayawijaya since 2002. He thought this increase was allegedly connected with the interest of the political elites and business providers.“Since 2002 the shortages and price increases on fuel and basic commodities are always occurred, what is actually happening? Why does the government always not have any solution?” he said. Further he said it makes the people suffered. Just imagine, now gasoline is sold for Rp 50 to 80 thousand per litter. He also asked the government to abolish the coupon system for subsidized fuel because it is considered as mafia practice of fuel market.
“The government needs to review and reduce the price of non-subsidized fuel or fuel for industry use. It also must reduce the price off basic commodities and adjust quota for fuel. The government should give free access of permits to the airlines to be operated in Jayawijaya. He also urged the government and local parliament to provide free access to the non-subsidized or industry-use fuel suppliers,” he said.
In the protest, the airlines representatives and the Head of Jayawijaya Trade, Industry and Cooperation Office has given time to answer the people’s aspiration. But, a protester said there is confusion about the quota of subsidized fuel, which is the Head of Trade, Industry and Cooperation Office, said the quota of subsidized fuel for Jayawijaya is 680,000 litter per month. It’s different with the statement of his deputy and the Head of Trade Department. “Whose statements are true? Whether those are from different office?” said a protester.
They also urged the local parliament to facilitate a meeting with all parties to discuss about the shortages and high prices in Jayawijaya. The Head of Jayawijaya Regional Council, Taufik Petrus Latuihamallo explained the parliament is currently tracking this case. The parliament also ready to accommodate the meeting to discuss about the current situation. Within a or few days the parliament will invited the representatives of Trade, Industry and Cooperation Office and airlines for prices calculation.
“We are prepared, but give us times to get the price calculation that currently considered as burden by people,” he said. (Islami/rom)
————————————————-
http://tabloidjubi.com/eng/west-papua-becomes-worlds-first-conservation-province/
4) WEST PAPUA BECOMES WORLD’S FIRST CONSERVATION PROVINCE
Victor MamborNov 04, 2015Environment0
Jayapura, Jubi/TheCoralTriangle – While forest fires rage elsewhere in Indonesia, West Papua is blazing sustainable trails as officials formally declare it a Conservation Province
The Indonesian province of West Papua has just been declared a Conservation Province, a first for both Indonesia and the rest of the world. The new designation is important both symbolically and in ensuring the future health of the province’s astonishing ecosystems. Besides its rainforests, West Papua is the world’s epicentre of marine biodiversity, boasting more species than anywhere else on the planet.
As forest fires rage in Sumatra in the midst of the worst El Nino weather event on record, this example of local government taking action in partnership with local communities and international NGOs shows that real, inclusive action is possible and that it can reach the legislative level.
The declaration was signed on Monday by West Papua governor Abraham Ataruri in Manokwari, the provincial capital, with Indonesia’s minister for Home Affairs, Tjahjo Kumolo in attendance. “This declaration will help us maintain and manage our natural resources wisely and continuously so that future generations can enjoy them,” said Ataruro. The new bylaw designating West Papua a Conservation Province falls under the jurisdiction of Indonesia’s Ministry for Forestry & the Environment.
Supported by Conservation International (CI), Worldwide Fund for Nature (WWF) and The Nature Conservancy (TNC), the local government in West Papua has set up a working group representing a range of civil and political bodies to ensure that the new legislation translates into meaningful action on the ground. They are now drawing up regional bills known as Ranperdasus.
The new designation has taken two years to enshrine in law and comes at a time when West Papua is experiencing a major surge in development. The province has huge resource wealth and is home to the Grasberg Mine, the world’s biggest gold and copper mine. Nickel mining has taken place on islands close to important coral reefs. Yet West Papua is also Indonesia’s least developed province and there are serious questions around the status and treatment of its indigenous population.
As Conservation International has stated in its strategic recommendations, which have fed into the new bylaw, there is a need to ensure the wellbeing of the Papuan people and to protect their customary rights over natural resources. This is as much a conservation priority as establishing an extensive network of Marine Protected Areas (MPAs) and curbing deforestation. Indeed the two are connected, since it is indigenous Papuans that hold ancestral tenure over both reefs and rainforests.
“West Papua should be developed in a way that benefits the people,” said Interior Minister Tjahjo Kumolo, who attended the signing of the declaration. “But West Papua must not lose its identity, its customs and traditions. The beauty of the environment must be maintained and preserved,” he added. (Johnny Langenheim )
---------------------------
Posted by AWPA Sydney News at 12:07 AM