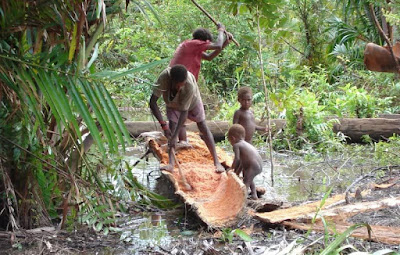 West Papuan while harvesting the sago – Jubi
Merauke, Jubi – A total of 80 households at Kamanggi Village, Tanah Miring Sub-district, Merauke Regency have prepared an area of approximately two hectares for sago saplings.
Its sustainability must be a concern given it is a staple food for Papuans, said Kamanggi Vilage facilitator, Bruder Johny Kilok, to Jubi on Tuesday (3/11/2015).“It had been agreed by villagers, but we still must talk about when the plan can be implemented. In addition, Kilok said they still have to figure out how to get the saplings.
“Yes, of course I need to talk and coordinate with the relevant office of Merauke Regional Government at first,” he said. Further, he said the villagers are getting ready to open four hectares of land to be planted with rice seeds for the next few weeks. “It is included in the agreement and ready to be executed,” he said.
However, he said an obstacle encountered by the villagers is lack of heavy equipment in preparing the plantation area. “Frankly, all this time we shared the rent cost of heavy equipment,” and added they made good harvesting from the rice plantation areas some times ago.“I am expecting the Merauke Government could give more attention and assistance therefore the villagers who are indigenous Papuans could involved in this land clearing activity,” he said.
Few times ago, the Merauke Regent Romanus Mbaraka said in principle the government is ready to donate the farming equipment to the local community if they want to open the rice plantation areas. (Frans L Kobun/rom)
—————————————————————————
2) West Papuans’ survival in the balance
Updated at 2:52 pm today
It is estimated that West Papuans are now a minority in their homeland, with a University of Sydney study predicting they will make up less than 30 percent of the population within five years. Many feel shut out of the economic expansion and democratic reforms Indonesia has experienced in the past decade, and see Jakarta's rule as a threat to the survival of their people and culture.
Between 150,000 to 500,000 West Papuans are thought to have died in a separatist conflict which has simmered since the 1970s, and speaking out remains a dangerous activity in a place tightly-guarded by Indonesian military and police. But the new Indonesian government says it's making real efforts to help Papuans improve their lives, and has begun allowing foreign journalists to visit and see for themselves.
RNZI’s Johnny Blades and Koroi Hawkins took up the rare opportunity to visit the region.
Video
http://www.radionz.co.nz/news/world/288929/west-papuans'-survival-in-the-balance