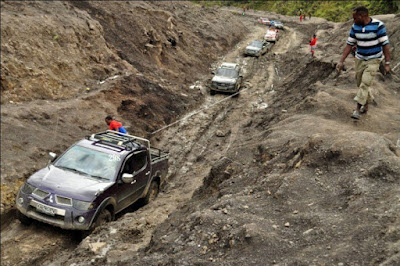 A number of vehicles pass along a road in Tageneri in Puncak Jaya regency, Papua, on Aug. 29, 2016. Mud frequently covers the road, particularly after heavy rains and landslides. (Antara/Iwan Adisaputra)
The government has so far disbursed some 18.54 trillion (US$1.39 billion) for the construction of the trans-Papua highway, which is being funded by multi-year state budgets from 2015 to 2017, an official has said.
Public Works and Housing Ministry’s Bina Marga (road agency) director general Arie Setiaji M said that  Rp 5.78 trillion would be disbursed this year.
“As much as Rp 4.06 trillion is being allocated to construct the road and bridges in Papua, while another Rp 1.71 trillion is [for projects] in West Papua,” Arie said as reported by kontan.co on Wednesday.
The total length of the trans-Papua highway is 3,259 kilometers, consisting of 10 road sections, Arie said, adding that the government had so far developed 2,789 kilometers.
He added that 1,570 kilometers of the road had been laid with asphalt. (bbn)
—————————————————————-
http://tabloidjubi.com/eng/different-treatment-indonesian-officials-indigenous-journalists-west-papua/
2) DIFFERENT TREATMENT FROM INDONESIAN OFFICIALS FOR INDIGENOUS JOURNALISTS IN WEST PAPUA
AdminFeb 16, 2017Headlines, Human Right0 Comments 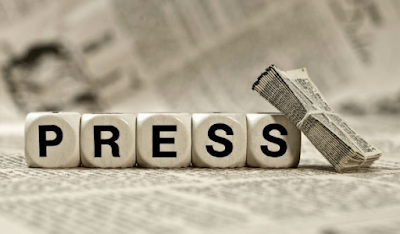