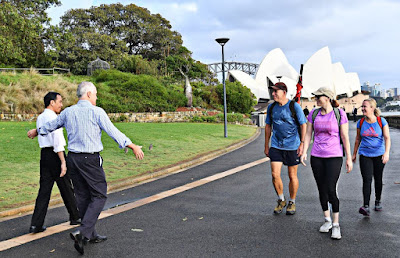 Australian Prime Minister Malcolm Turnbull took President Joko “Jokowi” Widodo for a short walk around the Royal Botanical Gardens on Sunday morning as the two leaders prepare to get into more serious business during a bilateral meeting around lunch time.
About a year ago, President Jokowi took the Australian leader to Tanah Abang Market in Central Jakarta for a blusukan (impromptu visit).
Just like any other Sunday, people were seen walking and jogging through the park, which borders the waters across the famous Sydney Opera House. Jokowi and Turnbull walked together without any apparent excessive security.
In a relaxed ambience, Jokowi was introduced to some passersby, including a young Australian father carrying his infant in a baby-strap on his chest.
"This is an example of a good father," said Turnbull when he and Jokowi chatted with the man.
(Read also: Jokowi arrives in Sydney)
After wrapping up the morning walk, the two leaders will engage in a one-on-one meeting to discuss efforts to improve bilateral ties amid recent tensions in military training cooperation.
Following the row, Jokowi reportedly suggested allowing Canberra to take part in joint patrols in the South China Sea, an issue that has sparked concerns from various elements at home.
Foreign Minister Retno LP Marsudi refused to confirm whether the matter would be discussed during the meeting.
Jokowi’s two-day visit to Australia is set to focus on strengthening trade and investment and maritime cooperation. Jakarta will push for the finalization of the Indonesia-Australia Comprehensive Economic Partnership Agreement (IA-CEPA). It is expected that the IA-CEPA will be concluded this year.
Jakarta and Canberra are also set to sign two memorandums of understanding on cooperation in maritime affairs and the creative economy. (ebf)