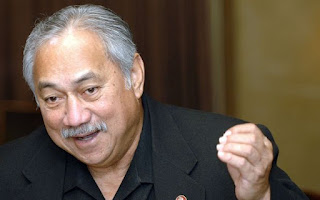 Faleomavaega Eni Hunkin died on Thursday in the US State of Utah. He was American Samoa's congressman from 1988-2015. Photo: AFP
His death was confirmed by his sister-in-law, Theresa Hunkin, who said he died peacefully at his home in Provo, surrounded by family and a few close friends.
Born in Vailoatai Village in American Samoa, Faleomavaega grew up in Hawaii, where he went on to study a Bachelor's degree in political science, before studying law on the United States mainland.
He then joined the United States Army, where he fought in the Vietnam War, eventually rising to the rank of captain. While in Vietnam, he said was exposed to the toxic defoliant, Agent Orange, which he claimed had contributed to health issues he experienced later in life.
After leaving the army in 1969, Faleomavaega served as the administrative assistant to American Samoa's delegate to Washington before returning to the islands of his birth in 1981, where he briefly became the territory's attorney-general before deciding to pursue a career in politics.
He was elected the territory's lieutenant governor in 1985, under the governorship of Aifili Paulo Lutali, before running for the territory's sole seat in Washington in 1988. Running on the Democratic Party ticket, he narrowly won that election against independent Lia Tufele with 51 percent of the vote.
But once he reached Washington, he became an established leader who went on to grow his support and hold the seat until his ouster by Aumua Amata in 2014.
RNZ International's correspondent in American Samoa's capital Pago Pago, Fili Sagapolutele, said that with 26 years in congress, Faleomavaega was a hugely popular leader, who won elections with large majorities.
"He was a strong leader," she said. "Not just as a political leader, but with the Fa'a Samoa (the Samoan way) because he holds that chiefly title, and despite the fact that he's in Washington most of the time he still was able to speak that Samoan language in fluently addressing in the cultural way and speak from one traditional leader to another. He had a lot of respect."
American Samoa is the only territory of the United States where its people are considered residents, not citizens. But, like other territories, American Samoans are also unable to vote for president and its sole representative in Congress is unable to vote on legislation.
That limited his efficiency and ability to get things done in Congress, but Ms Sagapolutele said that only made him more committed to the fight. In his 26 years in Washington, Faleomavaega served as a member of the House Committee on Foreign Affairs and the House Committee on Natural Resources, which have jurisdiction over the US territories.
In terms of legislation, Faleomavaega successfully pushed for more funding for the territory - particularly for roads, schools and other infrastructure - and opposed deals that would have threatened American Samoa's tuna industry.
He also fought, unsuccessfully, for greater rights for American Samoa. In Congress, he proposed legislation that would have allowed residents of territories to vote in presidential elections if they were active members of the military, and, towards the end of his tenure, for the people of American Samoa to consider a push towards greater autonomy, if not independence from the United States.
Faleomavaega also became somewhat of a representative for the other countries of the Pacific in Washington, Ms Sagapolutele said. During his tenure he spoke on issues such as climate change, the West Papua independence movement, and other issues affecting the region.
"One big example was in 1996 when he boycotted an address by the French president at the time before Congress due to French nuclear testing in the South Pacific," she said.
However, as health problems began to present themselves in the early 2010s, Faleomavaega's popularity began to wane. In 2014, he was ousted by the current congresswoman Aumua Amata. In an interview with KHJ News at the time, he said his loss had come as a surprise, and that despite the result, he had no intention to retire from politics.
At his farewell speech in Washington, he said he never expected the people of American Samoa to support him for so long: "I go forward ... knowing that the best is yet to come and hoping I will be remembered for trying my best. For the times I fell short I ask for forgiveness. And to each of my colleagues, and to you, Mr Speaker, I extend my kindest and highest regard."
Ms Sagapolutele said Faleomavaega's health had been a concern in recent years, with a couple of high profile medical evacuations to Hawaii which he had attributed to Agent Orange poisoning. She said that despite promising to stay involved in politics, he had been relatively low profile since 2015, apparently writing a book.
Ms Sagapolutele said funeral arrangements were yet to be announced, including whether Faleomavaega's body would be returned to American Samoa for burial. The territory's governor, Lolo Matalasi Moliga, and Ms Aumata were expected to release statements in the coming day.
Faleomavaega Eni Hunkin is survived by his wife, Hinanui, five children, and 10 grandchildren.
——————————————-
http://www.antaranews.com/en/news/109618/indonesia-seeks-to-strengthen-cooperation-with-australia

Jakarta (ANTARA News) - Indonesia is seeking to enhance its cooperation with Australia during President Joko Widodos state visit to the neighboring country on Feb 25-26 over the weekend."This will be an important visit, as it is a visit to a close neighbor," spokesperson of the Ministry of Foreign Affairs Arrmanatha Nasir noted during a press briefing here on Thursday.President Widodo is scheduled to have a state dinner with Prime Minister Malcom Turbull accompanied by their spouses during the visit to Australia, Nasir stated.President Widodo will discuss several issues and areas of cooperation, such as the acceleration of the Indonesia-Australia Comprehensive Economic Partnership Agreement and the expansion of cooperation in the education, tourism, cybersecurity, maritime, and investment sectors.Moreover, Indonesia will promote its sustainable products, such as timber, palm oil, and pulp and paper, in the Australian market.In terms of people-to-people cooperation, Indonesia will inaugurate three Indonesian language centers in Canberra, Perth, and Melbourne.President Widodo will also meet Australian businessmen and enterprises as well as Indonesian citizens residing in Australia, Nasir revealed.The suspended military cooperation between the two countries is also expected to continue. "It depends on the investigation result delivered to the TNI," Nasir noted.Minister of Foreign Affairs Retno Marsudi is scheduled to accompany the president along with several high-ranking Indonesian officials.President Widodo had earlier postponed his plan to visit Australia in November after a protest in Jakarta turned violent.The volatile situation on the domestic front had required the president to stay in Indonesia.(*)

8) Jokowi's visit to Australia 'special': Foreign Ministry
Liza Sani The Jakarta Post
Jakarta | Thu, February 23, 2017 | 10:39 pm
President Joko "Jokowi" Widodo is set for his first state visit to Australia on Feb. 25 to 26, with an emphasis on strengthening trade and maritime cooperation.
The neighboring countries aim to strengthen bilateral relations that are "mutually beneficial and respectful", the Indonesian Foreign Ministry says.
Ministry spokesperson Arrmanatha Nasir told a press briefing on Thursday that Jokowi's visit was "special", saying that unlike usual state visits, the two heads of states were set to have a private dinner. Prime Minister Malcom Turnbull and wife Lucy Turnbull would host a dinner for Jokowi and First Lady Iriana Widodo.
"This shows a closeness between the two leaders," Arrmanatha said.
The visit is set to focus on boosting economic relations between the two countries, especially to push the ongoing negotiations on the Indonesia-Australia Comprehensive Economic Partnership Agreement (IA-CEPA) that Jakarta expects to conclude this year.
Indonesia also aimed to expand market access on sustainable products, Arrmanatha said, noting the example of export of Forest Law Enforcement, Governance and Trade (FLEGT)-licensed timber, which guaranteed that the timber had been harvested, processed and exported in accordance with national laws.
Three memorandum of understandings (MoUs) were also currently in the final stages of discussion, namely in maritime cooperation, maritime security and the creative industry, he added.
Other areas of focus between the two countries would include cyber security training, investment, tourism, as well as Indonesian language education. The President is set to inaugurate a language center during his visit. (evi)
-------------------------------