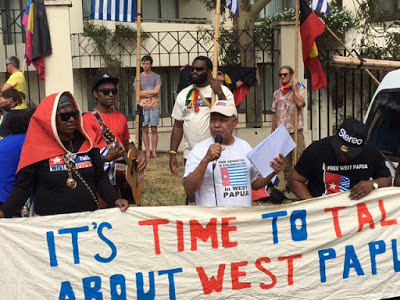 Joe Collins of AWPA said, “as usual we can expect the issues of  counterterrorism, cybersecurity, and maritime security to be on the agenda but no doubt West Papua will be the elephant in the room again. The human rights situation in West Papua should be raised not only at this meeting but raised by Australian officials at all bilateral talks between Australian and Indonesian officials.

In a joint press release from the Australian side it states “Australia and Indonesia share a steadfast commitment to a stable and prosperous Indo‑Pacific region”.

Joe Collins said that "West Papua is the one issue of great concern in our region and Australia should be doing all it can to encourage Jakarta to sit down and dialogue with West Papuan representatives to discuss all the issues of concern they have'.  It is now 54 years since Indonesia took over the administration of West Papua and the courageous West Papuan people  are still marching in the streets risking arrest and torture and calling for their right to self-determination.

The West Papuan people and their representatives have achieved great victories in the past few years and as support continues to grow for West Papua not only in our region but world wide, Australia and Indonesian must realize that West Papua is truly back on the agenda and won’t be going away.
Ends.