1) Ambaidiru, The coffee pioneer in Papua 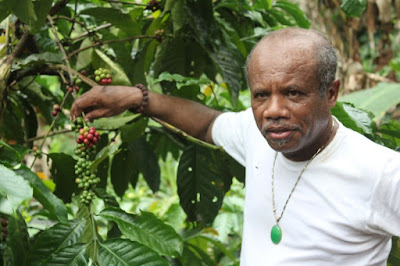 Tabloid, Jubi – Saturday, 6 April 2018, legislator Yonas Nusi, who represents Saireri elected area, tells Jubi about the coffee plantations in Ambaidiru, Yapen Islands District.
He said Ambaidiru coffee plantations have existed since the Dutch era in 1959. “Missionaries –known as Zending—from the Netherlands first introduced coffee to the local people. In 1977, the Aimbaidiru community and village cooperatives continued to grow and maintain the plantations, and it lasted until the 2000s,” he said.
Aimbadiru coffee was first introduced to the local community by Zending Bink in 1924. It started widely planted in 1938. So it can be said that Ambaidiru coffee plantation is a pioneer in the development of coffee plantation in Papua.
Ambaidiru is a village located in Kosiwo Sub-district of the Ambai Islands in the south of Yapen Island. With 301.367 m2, it is approximately 4914 inhabitants live in this village. During the Dutch era, Ambaidiru was a centre for the production of robusta coffee, vanilla and vegetables.
“Coffee has a long story in Papua. People should have adequate knowledge to produce a product that can fulfil the market demand,” he said.
Moreover, he said that coffee should get attention as a high value and potential commodity for the Yapen Islands. Therefore the local government must support the local people by providing skills and management training on coffee production. So the Mayor of the Yapen Islands should able to listen to people’s aspiration, because of the source of community income affect the efforts of a community. “I support the provincial government’s efforts, particularly in Yapen Islands, to promote the potential of indigenous people in every sector, principally the economic sector.
However, another important is he asked are there among the Ambaidiru young people studying agricultural and plantation? He hopes they can finish their study and return to their village to manage the coffee plantation professionally.
A youth from Yapen Islands Markus Yoseph Imbiri said there are several problems concerning the cultivation of coffee in Ambaidiru Village, namely the low maintenance. “Ambaidiru coffee suffers the problem of increasing the number of coffee production because the trees have planted since the Dutch era,” said Imbiri.
Imbiri, who is also the Chairman of IT Volunteers, said several steps have done to grow the coffee. “People ask the government to provide more seeds to scale up the plantation,” he said.
Imbiri admitted that the government already established some agencies to support the local people. Some NGOs and cooperative named Coffee Agency are also there to help. “Some institutions are still active, but some are not. But the government support to revitalise the coffee plantations is very important,” he added. (*)
Reporter: Hengki Yeimo
Editor: Pipit Maizier
--------------------------------
http://www.thejakartapost.com/news/2018/05/18/freeport-mcmoran-boss-arrives-at-energy-ministry.html
2) Freeport McMoRan boss arrives at energy ministry for undisclosed meeting
Stefanno Reinard Sulaiman The Jakarta Post
Jakarta | Fri, May 18, 2018 | 02:11 pm
Freeport McMoRan president and CEO Richard C. Adkerson arrived at the Energy and Mineral Resources Ministry on Friday at 11:20 a.m. for a meeting with the minister, although details on the meeting were not disclosed.
Freeport McMoRan is the parent company of PT Freeport Indonesia (PTFI), and has long been in talks with the government over its Grasberg copper mine in Papua and divesting 51 percent of PTFI shares as part of the terms of a new mining license.
The ministry’s mineral and coal director general Bambang Gatot Ariyono claimed to have no information on the purpose of the meeting.
"I don't know yet, I was just called to come [to the meeting]," he said, when he was asked about the meeting between Energy and Mineral Resources Minister Ignasius Jonan and Adkerson upon his arrival at the ministry.
Adkerson, who was accompanied by PTFI executive vice president Tony Wenas did not make any comments on the meeting.
Recently, the ministry issued a ministerial regulation that extended the divestment deadline to 2019 for foreign companies holding a special mining permit (IUPK), which included Freeport.
The extension of the deadline for divestment was stipulated in the Energy and Mineral Resources Ministerial Regulation No. 25/2018.
The regulation stipulates that a holder of a special mining permit (IUPK) and which formerly had a working contract (KK) and has been in production for at least five years since the issuance of Government Regulation No 1/2017 is obliged to divest 51 percent of its stake no later than 2019.
Divestment talks between the government and Freeport have been taking place since early 2017 and the government initially targeted concluding negotiations by the end of 2017. (bbn)
—————————————————

Posted by AWPA Sydney News at 1:48 AM