1) DSE: we are not part of West Papua trip 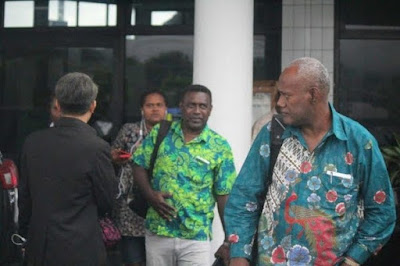 The SI delegation that traveled to West Papua arriving into Sentani Airport in Indonesia's Papua province on 24 April 2018.

DEVELOPMENT Service Exchange (DSE) has rejected claims that it is “officially represented” in a government delegation that visited West Papua last week.
The delegation, led by the Chief of Staff in the Office of the Prime Minister, John Usuramo, included chairman of DSE Inia Barry and other civil society activists.
But DSE, the peak body for civil society in Solomon Islands, said it has not endorsed anyone to represent civil society on this visit.
“Participants are acting solely as individuals,” DSE general secretary Jennifer Wate said.
“They do not represent DSE or any other civil society organisation in Solomon Islands,” she added.
Mrs Wate said DSE advocates for Human Rights, Justice and self-determination and has continued to show its strong support for the people of West Papua.
“DSE has continued to advocate for the Solomon Islands Government to uphold these values in our country's trade and foreign policy.
“DSE values the strong relationships between West Papua and Solomon Islands Civil society.
“We admonish all members of this group for failing to include, consult or even inform West Papuan civil society of their visit.”
Mrs Wate said the DSE management was informally made aware of the trip only the evening before participants flew to Indonesia.
“The participants assured DSE management that they are attending in an individual capacity, and would not be representing DSE or any Civil Society organisation.
“DSE was not privy to details of the trip or its terms of reference.
“We call on the Government and in particular the Prime Minister’s Office to formally approach DSE or its members on any matters that require CSO sector representation.”
----------------------------------

2) Indonesia aims to be free of malaria by 2020
Reporter: Otniel Tamindael  11 hours ago

Jakarta (ANTARA News) - Indonesia, with almost half of its population residing in malaria-endemic areas, aims to be free of the mosquito-borne disease by 2020.Malaria is a potentially deadly disease caused by parasites and transmitted to people through the bite of an infected Anopheles mosquito, but it can be prevented.Hence, malaria elimination initiatives have officially been declared by the Indonesian Ministry of Health, which has set a target to free the country of the disease by 2020 through total eradication.The World Health Organization (WHO) has stated that in the outer island groups of Indonesia, the incidence of malaria is much higher, with an almost equal prevalence of Plasmodium falciparum and Plasmodium vivax infections.Global fund is supporting the malaria control program in Indonesia through intensification of malaria prevention and control activities. In the first round, the Ministry of Health is targeting to reduce malaria morbidity in five areas, with the highest endemicity, all of which are in the eastern Indonesian provinces.The Ministry of Health aims to build partnerships and step up integration for malaria control with antenatal care and Expanded Programme of Immunization activities to ensure sustainability and to develop a routine malaria control program.The WHO is also extending continued technical support to the Malaria Transmission Consortium that is supporting the malaria operational research through four universities in the country.During this time, the number of malaria endemic areas in Indonesia is quite high, so Health Minister Nila F. Moeloek has expressed hope that there would be no more casualties due to malaria in future.The health minister has stated that the spread of malaria in the highest endemic areas are in the provinces of Papua, West Papua, and East Nusa Tenggara.Hence, the government is targeting no other high-risk areas of malaria by 2020.All districts and cities are expected to be free of malaria by 2025, while all provinces are expected to achieve the target by 2027, and Indonesia is hoped to realize total elimination by 2030.Hence, prevention of malaria disease will need vigilance of health workers, government, and society to prevent the infectious disease."We are working hard for achieving total elimination of malaria," the minister said.Malaria is a major public health problem in most tropical countries, including Indonesia, with some of its provinces in the eastern region recording high number of cases of this deadly disease.Hence, the Indonesian Ministry of Health has appealed to the public, especially tourists, to be wary of the transmission of malaria.Based on data from the Ministry of Health, malaria is still endemic in the provinces of Papua, East Nusa Tenggara, Maluku, North Maluku, and West Papua, as the achievement of the target to eliminate the deadly diseases in these provinces is still zero percent.The Asia Pacific Leaders Malaria Alliance (APLMA) has recorded that of the 80 percent malaria cases in Indonesia in 2017, Papua Province has reported the highest number of cases of the deadly disease, followed by East Nusa Tenggara, Maluku, and West Papua.The APLMA is an alliance of Asian and Pacific heads of government formed to accelerate progress against malaria and to achieve an Asia Pacific that is free of malaria by 2030.In East Nusa Tenggara Province last year, the local Health Office recorded that as many as 29 thousand malaria cases had plagued the communities in the island province, with cases reported in the district of Sumba Island, followed by Lembata, Ende, and Belu.In the province of Papua alone, the local Health Office has reported that four districts and the city of Jayapura remain endemic to the spread of malaria disease, with a very high number.The Papua Health Office stated that the highest rate was recorded in the district of Mimika, followed by Keerom, Jayapura, and the city of Jayapura.To this end, the local health office has been striving to reduce the number of malaria cases in these four districts and other areas in the province of Papua.Interestingly, the government of Teluk Bintuni District in West Papua last year was quite successful in suppressing malaria cases.The people in Teluk Bintuni District have been actively participating in the malaria elimination program for the last few years.The local Health Office has involved members of the community as health cadres, and the volunteers are trained to provide early treatment of malaria.Malaria, the world`s most important parasitic infectious disease, is transmitted by mosquitoes that breed in fresh or occasionally brackish water.The symptoms of malaria include fever, chills, headache, muscle aches, tiredness, nausea and vomiting, diarrhea, anemia, and jaundice, or yellow coloring of the skin and eyes.Convulsions, coma, severe anemia, and kidney failure can also occur. The severity and range of symptoms depend on the specific type of malaria.In certain types, the infection can remain inactive for up to five years and then recur. In areas with intense malaria transmission, people can develop protective immunity after repeated infections. Without prompt and effective treatment, malaria can evolve into a severe cerebral form followed by death.(O001/INE/o001)(T.O001/B/KR-BSR/O001)
Posted by AWPA Sydney News at 7:16 PM