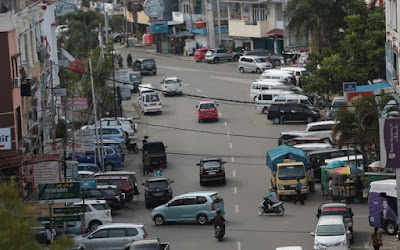 Downtown Jayapura. Photo: RNZ / Koroi Hawkins
The Solomon Star reports Development Service Exchange (DSE) spokesperson Jennifer Wate made the comment while rejecting any involvement in the trip.
This is despite its own chairsperson, Inia Barry, being among several from civil society organisations who went along on the visit, which was hosted by Indonesia.
Jennifer Wate said her organisation had found out about the trip the evening before the delegation's departure for West Papua.
She said the DSE did not endorse Mr Barry or any of the other civil society representatives who took part in the West Papua visit.
She said her organisation was not aware of any details of the trip or its terms of reference and she called on the Solomon Islands government in the future to formally approach the DSE on matters that required civil sector representation.
Jennifer Wate also admonished the government for not informing civil society groups in West Papua ahead of their trip.
-------------------------------------------
https://www.theguardian.com/australia-news/2018/may/07/oil-and-gas-had-hidden-role-in-australias-response-to-indonesian-invasion-of-timor-leste#img-1
2) Oil and gas had hidden role in Australia's response to Indonesian invasion of Timor-Leste
Exclusive: Documents appear to show government ‘embarrassed’ to reveal border negotiations drove legitimising of Indonesia
Helen Davidson  Tue 8 May 2018 04.00 AEST•
Sign up to receive the top stories in Australia every day at noon
Newly declassified documents have revealed that Australia appeared driven by a desire for oil and gas rights when it was deciding to legitimise the Indonesian occupation of Timor-Leste.
The documents, which date from the early 1970s, were among files subject to a long running freedom-of-information dispute between an academic and the National Archives.
A five-day hearing went before the administrative appeals tribunal (AAT) last week. Much of the government’s evidence was given in secret, with the applicant, the academic and author Kim McGrath, and her lawyers prevented from hearing the reasons successive governments blocked her applications over a number of years. The tribunal reserved its decision.
Under the Archives Act, cabinet documents are made public after 30 years, with exemptions.
However, during the hearing, the National Archives released some of the files in question, including cabinet submissions and diplomatic cables. 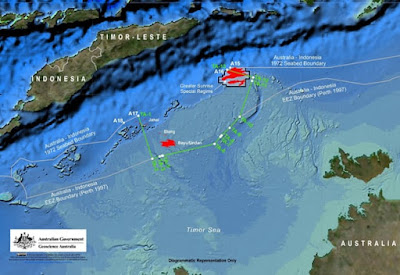 The new Australia-Timor-Leste border agreed on in March 2018. Photograph: Geoscience Australia
McGrath claims they supported her research findings that federal governments appear to have deliberately hidden the key role its interests in oil and gas reserves had in Australia’s diplomatic history with Indonesia and Timor-Leste.
Indonesia invaded Timor-Leste in 1975, and in 1979 Australia became the only western nation to formally recognise its sovereignty. The violent occupation continued until 1999.
McGrath, who last year published a book, Crossing the Line: Australia’s Secret History in the Timor Sea, said the documents made public this week suggested the Australian government was “embarrassed” to publicly reveal that border negotiations were the key issue motivating Australia to give legitimacy to Indonesia’s occupation.
“It wasn’t just that we wanted to appease Indonesia for the sake of being friendly with a big neighbour. It was because we had a direct commercial interest.”
A newly unredacted 1978 cabinet submission by the then-foreign affairs minister, Andrew Peacock, discussed the implications of moving towards either “de facto” recognition of Timor-Leste as effectively but informally under the control of Indonesia, or to formally declare “de jure” recognition of Indonesia’s sovereignty.
De jure recognition would allow the two countries to formally negotiate.
“In the material that was released, there’s a line that used to say ‘a natural and steady progression to de facto recognition’ and then it was redacted the next few lines,” McGrath said.
“What’s been revealed underneath the black ink is that it goes on to say ‘and ultimately, by falling in with international developments, full acceptance of East Timor as part of Indonesia so as to allow the negotiation of the seabed boundary between Australia and Indonesia in the missing link section adjacent to East Timor’.”
The submission from Peacock – who had been vocal in opposition to Indonesia’s actions – recommended the government use the term “full acceptance” before moving towards de jure, which would allow for a speedy track towards negotiations, but cabinet later amended the submission to use de facto, effectively sabotaging his speed-up efforts, McGrath said.
It was one of at least three newly unredacted paragraphs of Peacock’s submission that referenced seabed negotiations.
Another suggested using the commencement of negotiations to mark Australia’s formal recognition of Indonesia’s sovereignty but warned against appearing anxious, lest Indonesia use it to bargain a better deal for themselves.
The deliberations, of which treaty negotiations now appear to have been a driving factor, came amid a worsening humanitarian situation on Timor-Leste.
McGrath said the released documents also illustrate the government’s attempts to avoid backlash from the public. At the time, members of the public and some members of parliament were uneasy with Australia’s diplomacy with Indonesia and angry about the human rights abuses, including mass starvations, in Timor-Leste, which were at a peak in 1978.
While critical of the invasion, in early 1978 Peacock publicly justified having closer ties with Indonesia and recognising its sovereignty with the need to work with its government to provide humanitarian aid to Timor-Leste and facilitate family reunions.
The public statements were silent on the maritime boundary negotiations, McGrath said.
In December, Peacock and the then Indonesian foreign affairs minister, Mochtar Kusumaatmadja, announced Australia’s recognition of an incorporated East Timor would be marked by the start of seabed negotiations.
Two diplomatic cables from 1972 – also released this week – including one from Australia’s ambassador to Indonesia, also suggest the government was fully aware international law was trending against its position in treaty negotiations with Indonesia – in that the border should be at the edge of Australia’s (wide) continental shelf, instead of a midpoint between the two land masses as was increasingly favoured by the international community.
Australia’s fractious negotiations over maritime borders with Timor-Leste and Indonesia stretches back decades and is marred by diplomatic disputes and accusations of espionage.
In March they largely came to an end, as Timor-Leste and Australia signed a treaty agreeing to a permanent maritime border and establishing a “special regime” area to share the untapped multibillion-dollar gas field in the Timor Sea. Exactly how that will be divided and where the extracted gas will be processed remains in question.
Human rights groups and observers claimed the treaty confirmed Australia had been profiting for years from resources that had been Timor-Leste’s all along.
The foreign affairs minister, Julie Bishop, told Guardian Australia the treaty established a joint development framework “for the benefit of both countries”.
“Both governments deemed this treaty to be fair and equitable,” she said.
Bishop declined to comment on other matters before the AAT.
At the beginning of the tribunal hearing, 24 files remained in contention, nine of which were produced by the department of foreign affairs, the rest by the attorney general’s department, the cabinet office, and the departments of external territories, natural resources, and of prime minister and cabinet.
The majority of them related to negotiations between Australia and Indonesia on the continental shelf boundaries and law of the sea delimitation with Timor-Leste.
A spokeswoman for Gordon Legal, which is representing McGrath pro bono in the case, said the secret hearing of the government’s defence for withholding the documents was “deeply concerning”.
“Transparency and accountability on the part of governments is a key part of our democracy, the fact we can’t scrutinise why the government won’t hand over documents in this case leaves Kim [McGrath] with more questions than answers in her pursuit of the truth about our involvement in Timor.”
The National Archives has been contacted for comment.
----------------------