http://www.thejakartapost.com/academia/2018/12/05/papua-land-of-violence.html
1) Editorial Papua, land of violence
Editorial Board The Jakarta Post Jakarta | Wed, December 5, 2018 | 08:26 am
Several quarters have persistently been calling for dialogue between the government and representatives of Papuan people, including resistance groups, to end the violence in the natural resource-rich province once and for all and turn it into a land of peace. Such a noble vision, however, has remained elusive, not only because of the lukewarm responses from past and current governments, but also because of the sporadic acts of violence that only beget more violence and, hence, a cycle of revenge that nobody knows how to stop. The latest report of the killing of at least 24 workers of state construction company PT Istaka Karya in the highland regency of Nduga shows Jakarta has not completely won the hearts and minds of Papuans, despite the many initiatives the government has undertaken, especially during the administration of President Joko “Jokowi” Widodo. Jokowi has translated his attention to Papua into massive infrastructure development in the region, particularly a trans-Papua road to free remote villages from decades-long isolation. He has also implemented a one-price fuel policy that is meant to bring some economic equality to Papua and West Papua and he visits the region frequently. The attack on workers constructing bridges for the trans-Papua road by members of a West Papua National Liberation Army faction led by Egianus Kogoya on Sunday, according to police, is expected to undermine the government’s new approach and its hard work. This approach would take years to bear fruit, but in the meantime it proves the commitment of the government to help the once forgotten Papua close its gap with other parts of the country.  Public Works and Housing Minister Basuki Hadimuljono said the construction of 35 bridges on the 278-kilometer road that is to connect Wamena and Mamugu would be suspended indefinitely following the incident, which was reportedly triggered by a worker who photographed a group of people gathering to commemorate the struggle for Papuan independence on Saturday. A joint police and military operation has been launched to hunt down the armed group responsible for the killings, probably the deadliest by such a group in Papua so far. This is exactly where the government needs to exercise caution because in the past security measures against alleged Papuan separatist group members were prone to human rights abuses. There have been allegations, sometimes proven, of atrocities against civilians accused of abetting the separatists. Such reports have arisen in part because Papua is practically closed to the outside world, despite President Jokowi’s policy to open it up. Use of violence is not the answer to the violence. Now that the police are holding a group responsible for the Sunday killings, the government must focus on law enforcement rather than on authorizing a security operation over which the public can hardly demand accountability. With the transfer of special autonomy funds to Papua ending in 2021, security problems may escalate. A dialogue to comprehensively address the Papuan paradox — which suffers poverty, illiteracy and injustice despite its rich natural resources — therefore remains the best solution to creating lasting peace. 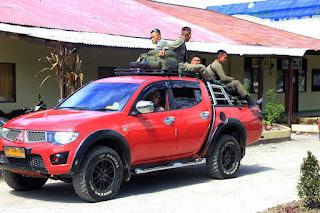 The National Commission on Human Rights (Komnas HAM) has urged the National Police, the Indonesian Military (TNI) and the government to be transparent in investigating the mass killing of construction workers in Nduga regency, Papua.
A rebel group led by Egianus Kogoya allegedly massacred 19 workers hired by state-owned construction firm Istaka Karya to work on the trans-Papua road project in Yigi district, authorities said.
The group, believed to be a faction of the National Liberation Army of West Papua (TPNPB), also killed a TNI member and injured another on the following day.
Commission chairman Ahmad Taufan Damanik said that whoever was behind such “brutal and inhumane” actions could not be tolerated. He said the government should pay more attention to this case, because killings in Papua had happened repeatedly.
“We ask the law enforcement authorities to immediately arrest and process the suspects. We ask for the case to be as transparent as possible,” Damanik said at his office on Wednesday.
He added that the background of killings in Papua often remained unclear.
The commission also requested that President Joko “Jokowi” Widodo ensure the protection of witnesses and guarantee that costs for the physical and non-physical recovery of victims and witnesses are covered.
“I also hope that the Witness and Victim Protection Agency can work together with the government to handle this matter,” he said. (ggq)
--------------------------------------------
https://en.antaranews.com/news/121041/mily-police-joint-team-to-evacuate-rebel-attack-victims
4) Mily, police joint team to evacuate rebel attack victims
Reporter: Antara  16 hours ago

The evacuation will be started on Wednesday by deploying troops through land and air routes, Sembiring said when contacting from Jayapura on Wednesday.

"For the first stage, the team would evacuate victims around Yigi and Mt Tabo," he said, adding that he could not confirm the number of victims that would be evacuated.

Earlier on Tuesday, the joint team has evacuated 12 civilians from Mbua, four of them are workers of PT Istaka, who managed to flee and sought refuge in the Mbua military post. The military post was then attacked by the rebels and one soldier was killed in the attack.

The attack on Sunday (Dec 2) by the armed group killed 31 workers of PT Istaka Karya, who were engaged in construction and building the Trans Papua project.

On Tuesday morning, 153 military and police personnel were transported to Mbua, which is the closest sub-district to Yigi Subdistrict, he remarked, adding that two of the four workers who survived the killing sustained shot wounds when they were found by the on-duty security personnel.

TEMPO.CO, Jayapura - The Military Regional Command (Kodam) XVII in Cendrawasih deployed one additional group from Infantry Battalion (Yonif) 751 VJS Sentani to strengthen the joint personnel assigned to Nduga, Papua following the killings against Istaka Karya workers.
“The military personnel are now in Wamena, departed from Sentani boarding Hercules aircraft,” Kodam XVII Cendrawasih Commander May. Gen. Joshua Sembiring told Antara today, December 5.
Earlier, as many as 169 joint personnel from Indonesian Military and National Police deployed to Nduga to evacuate the victims killed by an unknown armed group in Yigi District.
Read also: Killings in Nduga, KontraS: Circle of Violence in Papua
Other than personnel, four helicopters including one unit of MI and Bolco were deployed for the evacuation process. Joshua said the team was still evacuating workers and wounded personnel.
According to Joshua, the evacuation effort started from Kali Yigi area and around Mount Tabo, but the joint team hampered by the weather and geographical conditions. “We hope there is no significant constraint,” he added.
Previous reports recorded a total of 31 people at the Trans Papua construction site were allegedly killed by armed groups on late Sunday, December 2. During the killings, the workers were building bridges in Yigi River and Aurak River, Yigi District, Nduga Regency, Papua.
ANTARA
--------------------------------------- 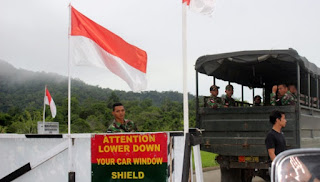 TEMPO/Maria Rita Hasugian
TEMPO.CO, Jakarta - The Army said they and the police will evacuate victims of shooting by armed groups in Nduga District, Papua today. The law enforcement will evacuate the workers and employees of PT Istaka Karya and TNI members who are victims of the incident.
Commander of the XVII Cenderawasih Kodam Maj. Gen. Joshua Sembiring said the armed forces and the police will dispatch troops both on land and water, assisted by helicopters.
"For the initial phase, the troops will evacuate the victims around Yigi and Mount Tabo," Joshua told Antara on Wednesday, December 5. He said that he couldn’t tell for sure how many will be evacuated.
At present, said Joshua, he and the Papua Regional Police Chief Insp. Gen. Martuani Sormin are still in Wamena. He said the officers are racing against time as weather changes quickly in the evacuation site.
On Tuesday, December 4, joint forces of the army and police evacuated 12 civilians from Mbua. Four of them were employees of PT Istaka who managed to escape and were secured at the TNI Mbua Post. They were also attacked by same armed groups, leading to the death of a TNI member.
Thirty-one workers of the Trans Papua road project who were building bridges at Yigi River and Aurak River in Nduga Regency were allegedly killed by an armed group on Sunday night, December 2. The Papua Police suspect that 24 people were killed on the first day, while eight people tried to escape—seeking refuge in the home of a DPRD member. Seven of them were "picked up" and killed by the armed men, while one is still missing.
ANTARA
---------------------------------
http://www.thejakartapost.com/news/2018/12/06/west-papua-liberation-army-claims-responsibility-for-mass-killing.html
7) West Papua Liberation Army claims responsibility for mass killing
Arnold Belau  The Jakarta Post
Jayapura | Thu, December 6, 2018 | 12:03 am
The West Papua Liberation Army (TPNPB) has claimed responsibility for the attacks that led to the death of 19 PT Istaka Karya construction workers and one Indonesian Military (TNI) soldier in Nduga regency, Papua. However, they claimed the workers were soldiers, not civilians.
“Yes, we conducted the operations in Kali Aworak, Kali Yigi, and at the Mbua TNI post, and we are ready to take responsibility. The attacks were led by Makodap III Ndugama commander Egianus Kogeya and operations commander Pemne Kogeya,” the spokesperson, Sebby Sanbom, said in a written statement on Wednesday.
Sebby denied, however, that the workers killed were civilians, claiming that they were members of the Indonesian Army Corps of Engineers.
Sebby said they had observed the workers for three months and were sure they were soldiers from Zipur working as a solid unit. Zipur is short for Zeni Tempur, an army unit specializing in engineering and technical aspects of battle infrastructure.
“Our targets are not wrong, we know which are civilian workers and which are TNI Zipur members, even if they wear plain clothes,” he said.
He added that the Papuans had not asked for the trans-Papua road the workers had been assigned to work on.
“Through this attack, we are telling the colonialist country of Indonesia that we are not armed criminals but true fighters for the freedom of the Republic of West Papua,” he said. “We did not ask for the trans-Papua road or development. The solution to the problem of Papua is independence and sovereignty as a civilized nation.” (kmt)
————————————————————————