In response to the latest shooting in the Yall District, Nduga Regency, in West Papua, the Indonesian security forces are preparing to undertake a military operation to find those deemed responsible.

Joe Collins of AWPA said, “there have been many conflicting reports in relation to the incident including the number of those killed which varies between 19 and 31 dead”.

Although media reports have indicated that those killed were civilian construction workers it has also been reported that up to 400 Army Engineers are being used in the construction of the 4,300-kilometer Trans-Papua road in areas of difficult terrain.

The Commander of the XVII Cenderawasih Kodam Maj. Gen. Joshua Sembiring said the armed forces and the police would dispatch troops both on land and water, assisted by helicopters to evacuate the victims. Up to 170 troops are reported to be involved in the operation. 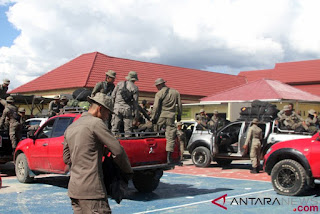 
Collins said, “although more information on the incident will eventually emerge, there is real concern for local people involved in the area where military operations take place. The security forces will be under great pressure to find those responsible and could be tempted to retaliate or use a heavy handed security approach to the incident as has occurred in the past”.
(Benny Wenda from the Free West Papua campaign said we should also be -aware of the use of Indonesian propaganda in matters such as this incident).

In the past the military have burned homes and destroyed food gardens leaving the local people traumatised and in fear for the lives causing them to flee to the bush. In July 2018 a military operation took place in the same region of Nduga causing large numbers of local people to flee the area. The Jakarta Post (15 July) reported at the time that human rights activists had urged the National Police and the Indonesian Military to withdraw their joint operation from Alguru in Kenyam, Nduga regency. The human rights organisations included the Papua Legal Aid Institute (LBH Papua) and the Papua chapter of the Indonesian Forum for Environment (Walhi Papua). 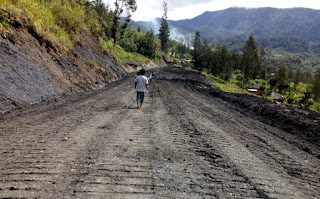 A section of the Trans-Papua Highway under construction. (Photo courtesy of the Public Works Ministry) Jakarta Globe (28 Nov 2017)

It is in the interest of the Australia Government to have a stable region to our north and it is hoped that our Foreign Minister Marise Payne will raise the matter with the Indonesian Government urging them to control the military during any military operations that will take place. This will save further lives in the conflict area.

There are many ways forward for the West Papuan people. A possible way is the UN Trust  Territory Council (sorry not sure of correct term A bit rushed this morning)
Under authority of General Assembly resolution 1752, Charter of the United Nations article 81 and 85 part 1, West Papua came under UN occupation in September 1961. United Nations administration has been implemented by the Republic of Indonesia since May 1963, public access has been restricted since September 1963, there have been reports of extrajudicial executions since 1965, exploitation since 1967, and armed conflicts and political arrests since 1969 when Indonesia also conducted a process it calls the ‘act of free choice’. An United Nations motion to call on Indonesia to allow a referendum or act of self-determination by 1975 was defeated on 19 November 1969 and the United Nations has not discussed responsibility for the administration of the territory since that time. A Yale Law School study in 1994 reviewed the application of the law of genocide to the administration of the territory. The UN Secretary General has not yet placed the news of General Assembly resolution 1752 on the agenda of the Trusteeship Council.
References available at http://wpik.org/ref