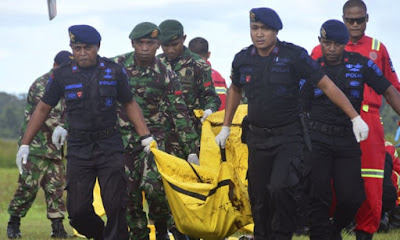 Indonesian soldiers and police carry a body bag containing the body of a victim of separatist attack in Nduga district in West Papua. Authorities have denied using white phosphorous during a military operation there. Photograph: Mujiono/AP
Indonesian authorities have angrily denied allegations of a white phosphorus attack on villagers in West Papua during a military operation this month.
The statement came after the Australian weekly the Saturday Paperpublished a photograph of a West Papuan villager with severe burns and a wounded leg and attributed the injuries to the use of white phosphorous.
Indonesia’s foreign affairs ministry said it “gravely deplores” what it dubbed irresponsible media reporting.
“The allegation highlighted by the said media is totally baseless, non-factual, and gravely misleading,” the ministry tweeted. “Indonesia possesses no chemical weapons.”
The Indonesian military maintains it had been trying to recover bodies after a group of road construction workers were killed in the remote region of Nduga.
The ministry said the report had overshadowed “the murder of 19 innocent civilians on 2 December 2018 by armed separatist groups in Nduga, Papua”.
Papua military command’s spokesman, Colonel Mumahammad Aidi, dismissed the newspaper’s report as fake news propaganda. He said helicopters couldn’t carry white phosphorus bombs.
“If the [military] was using phosphorous bombs, the Nduga district would have been wiped out,” he said in a statement to the Australian Broadcasting Corporation. “All human beings and animals there would have been wiped out.”
The Free West Papua movement called for an urgent investigation. “Where is the international outcry?” a spokesman tweeted. “There needs to be a UN Fact-Finding Mission to immediately visit West Papua to assess first-hand what is happening on the ground.”
White phosphorous is highly toxic and burns in contact with oxygen. When it touches human skin it can cause deep burns that reach the bone. It is often used by militaries as a smokescreen or to mark targets.
White phosphorus and other incendiary weapons are prohibited for use against civilian populations under the international convention on certain conventional weapons.
Australia’s Department of Foreign Affairs and Trade said it was aware of continuing reports of violence in Nduga, Papua, including unverified reports of the alleged use of phosphorous projectiles.
“The government condemns all violence in Papua, affecting civilians and authorities alike,” a spokesman said. “We will continue to monitor the situation, including through our diplomatic missions in Indonesia.”
The Indonesian-controlled Papua and West Papua provinces are located on the western half of the island of New Guinea. Political control has been contested for more than half a century and Indonesia has consistently been accused of human rights violations and violent suppression of the region’s independence movement.
The indigenous people are Melanesian, closely linked to the people of Papua New Guinea, the Solomon Islands, Vanuatu, Fiji and New Caledonia.
Indonesia formalised its control over West Papua in 1969 when its military handpicked 1,026 West Papuans and compelled them into voting in favour of Indonesian annexation under a UN-supervised, but undemocratic, process known as the Act of Free Choice.-------------------------------------
https://en.antaranews.com/news/121494/indonesia-will-take-steps-against-australias-libelous-media-report
2) Indonesia will take steps against Australia`s libelous media report
Reporter: antara  7 hours ago
Jakarta (ANTARA News) - The Indonesian Foreign Ministry said it will take steps against "irresponsible and misleading" report by Australia`s The Saturday Paper about recent Papua`s Nduga incident in which tens of Indonesian construction workers had been killed by "armed criminals" believed to be separatists.The Foreign Ministry denied the report issued on Saturday accusing the Indonesian government of using chemical weapons in security operation in Nduga.The accusation is entirely "baseless, not factual and totally misleading," the foreign office said in a statement, but it did not go into details about the steps to be taken.The Foreign Ministry described the report "very regrettable and irresponsible" and strongly denied the allegation about the use of chemical weapons.The Ministry said Indonesia as a member of the Organization for the Prohibition of Chemical Weapons (OPCW) has not even one of the chemicals listed in the Convention of Chemical Weapons.As for the use of the military involvement in security operation in Papua, the Ministry said it was not as described by The Saturday Paper. The role of the military is very limited to assisting in law enforcement not for military operation.The Ministry said the Paper belittled the urgency of what had happened in Nduga where 19 innocence civilians were murdered by a group of armed separatists on Dec. 2, 2018.The civilians were all construction workers building part of the Trans Papua highway, a national project to improve the welfare of all Indonesians in Papua, it said.The Saturday Paper published in its edition No 236 an article titled "Exclusive: Chemical weapons dropped on Papua" with photograph.Reporting by Azizah FitriyantiEditing by Bustanuddin
------------------------------------
https://en.antaranews.com/news/121493/iindonesia-deplores-irresponsible-media-report-on-papua

Reporter: antara  7 hours ago
Jakarta (ANTARA News) - Indonesia deplored irresponsible media report as demonstrated by print and online media based in Australia, known as the Saturday Paper on December 22, 2018.The media accused Indonesia of using chemical weapons in its operations in Nduga, Papua, based on a statement from Foreign Ministry here on Sunday.The allegation highlighted by the said media is totally baseless, non-factual, and gravely misleading. Indonesia possesses no chemical weapons.As a compliant member of the Organisation for the Prohibition of Chemical Weapons (OPCW), Indonesia has no possession of any chemical agents as listed in Schedule 1 of Chemical Weapons Convention.Accordingly, Indonesia also imports, uses, and stores Schedules 2 and 3 chemical agents for strictly peaceful purposes in supporting national industry, confirmed by no less than 19 OPCW inspections since 2004.The involvement of military component in the operation, most particularly air rotary wing assets, was strictly as assistance to law enforcement apparatus, and not a military deployment per se in an otherwise internal security operations.?The misleading report has also eclipsed the real issue at hand, which was the murder of 19 innocent civilians on 2 December 2018 by armed separatist groups in Nduga, Papua.?These civilians were construction workers tasked to build segments of Trans-Papua highway, as part of the nation-wide effort to elevate the well being of Papuans as Indonesian citizen.Indonesia will take necessary measures against the said media.Reporting by Azis KurmalaEditing by Bustanuddin