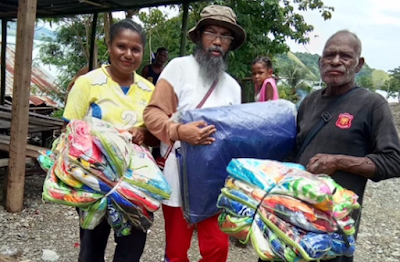 Franciscan Brother Agust Adil (center) has been traveling around Sentani to distribute food and other materials such as tents,
mattresses and other daily necessities for evacuees since floods struck the area on March 16. (Photo by Benny Mawel)
Two weeks after flash floods and mudslides swept villages in Sentani and other subdistricts of Jayapura in Papua province on
March 16, thousands remain in evacuation shelters run by the government or church groups.
At least 112 people died in the tragedy while 94 remain missing. Some 374 houses, four bridges, five places of worship and
eight school buildings were damaged, with more than 6,000 people still living in evacuation centers.
Media reports claim nearly 12,000 people have been displaced by the natural disaster in a province that a fact-finding
mission from Australia declared in 2016 to be at risk of a "slow-motion genocide."
President Joko Widodo and First Lady Iriana Widodo visited the disaster zone on April 1, two days after authorities ended
a 14-day emergency period, and reassured flood victims at Toware sports stadium that they would be safely evacuated,
with new houses built once the land had been acquired.
But time is of the essence for those struggling to survive from day to day.
Tolakhe Meaga, 49, and her family chose to remain at the Kehiran evacuation shelter in Jayapura, sustained by aid from
church groups. The shelter is near Christ the Redeemer Church.
She said she was too traumatized to return home, still haunted by the memories of watching her village washed away
in roiling, muddy waters. She, too, almost perished that evening.
Muhamad Aidi, a military spokesman in Jayapura, said the death toll could surpass 190 as hope of finding those who
are missing starts to fade.

Many properties, including Meaga's home, have all but vanished from sight, swallowed up by pits of mud.
She said everything happened so fast that people didn't even have time to rescue their pets or belongings.
"When I heard people scream 'flood, flood' I began to panic. I ran into my house but the only thing I had time to
grab was my Bible," she said.
She said two female relatives identified as Ani and Ana were dragged away by the strong current but managed to survive
by clinging to nearby poles. "The current took me too," she said. "I was holding my Bible in one hand and praying while
grabbing a pole in my house with the other."
She was reunited with Ani and Ana at the shelter.
Benny Kossay, a local Catholic leader whose house was inundated, said he was awoken to find his bed semi-submerged.
His first thought was to get his wife safely outside. "I tried to open the door but stones and sand had wedged it
in place," he said.
Hours later, he was one of 70 families living near the area's famous Cyclops Mountains to be evacuated to the Kehiran shelter.

About 1,200 evacuees at the camp and in other parishes have been receiving food and medical services from local Franciscans,
according to Father Tarcisius Sina Lenggari, secretary of the Franciscan mission in Papua.
He said the congregation has opened public kitchens in remote areas that cannot access government aid, and it has been working
in concert with Christ the Redeemer parish to do whatever it can.
The rescue and rehabilitation efforts got easier as more volunteers and seminarians trickled in from neighboring districts to
help distribute food to people, but they still lack enough cooks, he said.
Yance Wenda, who is staying at another shelter managed by different church groups, said skin irritations and fungal infections
are becoming rife.
Franciscan Brother Agust Adil, founder of the Surya Kasih Clinic for HIV patients, has organized a medical team.
It consists
of workers from Dian Harapan Hospital, owned by Jayapura Diocese, and Franciscan-owned Provita Hospital.
They have established an emergency clinic at Kehiran parish in cooperation with Christ the Redeemer Church.
"No one at the camp has suffered from a serious illness yet," Brother Adil said.
Parish priest Hendrikus Nahak said many young people have helped to hand out donated gifts that arrived at the parish-run
post office, including rice, noodles, tents, mattresses, diapers, milk and soap. "They came from other dioceses in Papua and
other parts of Indonesia," he said.
The priest said church groups were filling a crucial void the government was unable to immediately take care of due to
limited supplies and trouble accessing isolated areas.
Hengky Hilapok, head of a local youth group, said the parish had donated a ton of rice, and they had found ways of
getting it almost everyone in need in the vicinity regardless of the location.

The process of rebuilding homes and lives will be especially tough and grueling for indigenous Papuans who
don't have any savings, said Dominikus Surabut, chairman of the Papuan Indigenous Council.
"They will have to start from scratch," he said. "On top of the material distress, they will also need time to heal from
all the psychological trauma."
Governor Lukas Enembe said the provincial government has allocated 15 million rupiah ($1,050) for every human casualty
of the floods.
He considers the Cyclops Mountains unsafe and expects many villagers will be relocated. "People should not live
there anymore," he said.
John Gobay, a member of the provincial council, said the government should use this as an opportunity to invest in
economic development. "That means not only building new homes for these people, but also providing them with
agricultural land," he added.
————————————
https://www.radionz.co.nz
2) Papua flood victims to be relocated, says Indonesian President
1:54 pm on 2 April 2019
Indonesian President Joko Widodo says some people in Papua's provincial capital of Jayapura will have to
relocate because of the threat of disasters.
On Monday, Mr Widodo visited flood victims in Jayapura, where 112 people were killed and thousands displaced
after torrential rain in mid-March.
Mr Widodo, who was accompanied by Papua governor Lukas Enembe, said the relocation site would be decided
by local authorities.
The Antara news agency reported that he said new houses would be constructed after land was acquired.
Posted by AWPA Sydney News at 12:12 PM